In my last two blog posts, I discussed the ongoing water supply challenges that Texas faces. As we saw in last week’s blog post, Texas is not the only state in that region of the United States to face protracted drought. New Mexico, which relies on the Rio Grande River (the same river that supplies much of Northern Mexico and Southern Texas) is facing severe water shortages in some parts of the state. In this post, I would like to continue the theme. Oklahoma faces many of the same challenges that Texas and New Mexico face. However, Oklahoma faces two unique claims to the limited water supplies in the State. First, the State of Texas has been in protracted lawsuits with Oklahoma over entitlement from the Red River Basin. Second, urban areas, particularly Oklahoma City are taking water claims in the Southern part of the State that the Indian Nations in the area claim. I will address the first issue in this week’s post.

Issue One: The Battle Between Texas and Oklahoma over the Red River Basin

Oklahoma’s main water resources are in the Southern and Western parts of the State. The Ogallala Aquifer runs through portions of the State, and the Red River forms the State’s Southern Boundary with Texas. A significant portion of the agricultural, urban and industrial water (mostly used for oil exploration) users in Oklahoma rely on these two sources of water. However, North Texas and the metroplex of Dallas-Fort Worth have claims to the Red River as well. It did not take many years of continued drought before disputes arose as to whom should have access to the water. 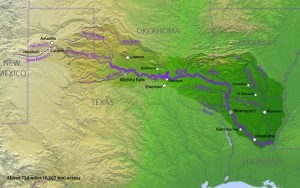 In April of this year, the Supreme Court heard oral arguments for the case Tarrant Regional Water District v. Herrmann. The case focused on the water claims of Texas and Oklahoma that the Red River Compact adjudicated. Congress authorized the Red River Compact in 1955 to allow the States of Texas, Oklahoma, Arkansas and Louisiana to divvy up water supplies from the Red River. It took the four states 23 years to agree upon the Compact which they signed in 1978, and Congress ratified in 1980. However, it did not take long for the states in the compact to start squabbling over who should get what entitlement.

(For a complete discussion of the Compact and the facts of the case in dispute, please see this interactive feature): http://stateimpact.npr.org/oklahoma/tarrant-regional-water-district-v-herrmann/

In the period after the Congress ratified the Compact, the population of North Texas boomed. In particular, the Dallas-Fort Worth area saw significant growth. The Tarrant Water District, the petitioner in the Supreme Court case, provides water to approximately 1.7 million people in 11 counties according to its website. In the face of a booming population and limited native water resources, the District looked to Oklahoma’s water resources to secure its future water needs.

In the initial court briefings, the Tarrant Water District argued first that the population is growing rapidly in Northern Texas, and the area will need continued water resources. According to the District’s own estimates, the population in its service area will more than double by 2060. Further, Oklahoma has vast water resources that Tarrant argues Oklahoma is not using. The State of Oklahoma uses approximately 2 million acre feet of entitlement from the Red River Basin each year. However, Tarrant argued that over 34 million acre feet of water flow from the Rocky Mountains and Mississippi River Basin through Oklahoma, and they do not use that water. The Red River Compact argues that each state should get “equitable” proportions of water from the River, but what is “equitable” is open for debate. As such, the Water District took Oklahoma all the way to the Supreme Court.

So what ended up happening? In June, the Supreme Court handed down a ruling that unanimously sided with Oklahoma. Oklahoma did not have to cede more water rights to Texas. In the opinion, Justice Sotomayor wrote,

Three things persuade the Court that the Compact did not grant cross-border rights: the well-established principle that States do not easily cede their sovereign powers; the fact that other interstate water compacts have treated cross-border rights explicitly; and the parties’ course of dealing

In the aftermath of the Supreme Court decision, Oklahoma lauded the decision as a protection of long-standing states’ sovereign powers. The Tarrant Water District remained concerned that it would have long-term supply challenges to sate its customers without further entitlement from Oklahoma’s resources. But in an interesting very recent twist, some pundits wonder if Tarrant’s dire water supply predictions are accurate. According to a September 20th article in Oklahoma State Impact,  despite the dire picture Tarrant painted, the actual water usage in the District has been “flat or down” in some service areas over the last year. In a Star-Telegram article, it seems as if Tarrant is backing down on some of its dire assertions. The article quoted Fort Worth Water Director Frank Crumb as saying, “We got a little over-optimistic on our growth estimates and they didn’t materialize. So we are just trying to get that back in line and correct it.”

It remains to be seen how Texas’s northern population will grow and how it will supply its continuing water needs. While the Supreme Court has ruled that it will not come from increased water diversions from the Red River, it may be found in State Representative Lyle Larson’s (R-San Antonio) recent call for a plan that would rely on interstate cooperation to develop conjunctive groundwater-surface water projects.

Stay tuned next week for the second part of this series.