In a move that seemed to surprise many interested parties, the California State Department of Water Resources (DWR) decided on an initial allocation of 5% of maximum deliveries to the 29 water contractors using the State Water Project. The initial allocation, while not unprecedented (the lowest initial allocation, also at 5% came in 2010 after the three year drought between 2007 and 2009) has raised concerns about long-term water supplies, storage, and a host of other issues. While DWR will likely raise the final allocation above 5%, California still faces tough challenges in managing drought conditions and economic growth in the long term. In this piece, I would like to address some of the reactions to the initial allocation and how California can plan for prolonged drought in the future.

But first a bit of background. The State Water Project is a system of reservoirs and aqueducts that delivers water from Northern California to customers in Central and Southern California. There are 29 state water contractors that have access to this water. The maximum amount of water that the SWP can deliver is 4.4 million acre feet. About 70% of the SWP supply goes to urban uses, and the remaining 30% goes to agricultural uses. The State Water Project theoretically can deliver 4.4 million acre feet to its contractors, but it rarely does. The amount of water that the State Water Project delivers varies widely from year to year.

All the water resources in California rely on a sizeable snowpack. However, the amount of snowfall that the western United States varies widely from year to year and the amount of water that water districts can receive from the public projects varies accordingly. Each year, the California Department of Water Resources will survey the snowpack and the amount of precipitation the state has received in areas where its water supplies originate. The department will compare the year’s snowpack to historical averages and make a determination of how much water it will grant to the state water contractors. This is the initial estimated allocation. As the rainy season progresses, DWR will make the final allocation determination for deliveries. Please see the table below for the historical yields that the State Water Project actually delivers. The light blue line shows the initial allocation, the dark blue line the final allocation. 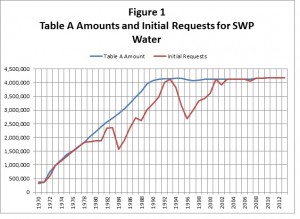 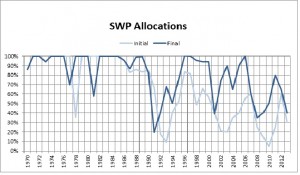 There are a few main reasons why it looks like 2014 will continue to face water challenges. First, we rely on Mother Nature to provide us with replenished water resources, and the forecasts show that she likely will not be cooperative. The National Oceanic and Atmospheric Administration predicts that this winter will be dryer than usual in parts of the Southwest and Southeast (Please see the graphic below). This is particularly challenging for California because we receive the vast majority of the year’s rainfall in the winter. We receive on average approximately 70% of our rainfall for the year in December and January, and approximately 90% of our rainfall between November and March. A dry winter could have lasting implications on the state’s water resources for the rest of the year. 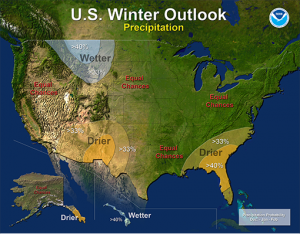 Second, the State’s main reservoirs are already well below historical averages in some instances. According to the State Department of Water Resources, Lake Oroville, the SWP’s main reservoir is at 41% of capacity. Lake Oroville is on average at 66% of its capacity at this date. Lake Shasta, the Central Valley Project’s largest reservoir is at 37% capacity versus the average at 61% of capacity on this date. As such, officials may be reluctant to increase deliveries significantly until the reservoirs recover closer to historical averages.

Meanwhile, the demands of thirsty end users and the elected officials that represent them will pull DWR in the opposite direction. When the news of the 5% initial allocation came out, many pundits and elected officials weighed in on the historically low projections. In a news release, Congressman Kevin McCarthy of Bakersfield stated, “It continues to be unacceptable that our constituents do not get the water they contract and pay for in full. Our state needs an affordable and reliable water supply to ensure a strong and vibrant economy, and I call on the Administration to take immediate action to increase vital water supplies for our communities.” Other groups, from ACWA to Senator Jean Fuller urged groups to back the Bay Delta Conservation Plan which they argue would increase water storage capacity across the state.

However, what is clear is that we cannot rely on Mother Nature yearly to supply us with new supplies on demand. We can build storage to capture as much rainfall in wet years. We cannot build a single new drop of supply. As such, I believe that our that our leaders should focus on storage and maximizing water capture during the rainy years Mother Nature gives us. Many organizations, including the Association of California Water Agencies and the State Water Contractors Association (SWCA) agree that storage capacity is key to our future water supplies. After DWR released its initial allocation figures, SWCA General Manager Terry Erlewine commented, “We lost an opportunity earlier this year to capture a significant amount of water due to our outdated water system. If we had a more modern water delivery system in place, like that proposed under the Bay Delta Conservation Plan, we would have more water in storage and today’s low allocation announcement wouldn’t be so dire.” Without this focus, we will only continue to fight over scarcer and scarcer water resources during the lean years like we are facing now.

3 thoughts on “What Will California do if the Initial State Water Project Allocation does not Increase Substantially?”