Just how much water pollution does the process of fracking create? Much like the debates over the scientific research behind climate change, it depends on whom you ask. Supporters of fracking argue that the process allows the United States to capture large amounts of domestically-produced oil and natural gas. They argue that the environmental impacts are minimal at most and are worth the plentiful energy that we can produce here at home. Opponents argue that the process of fracking depletes groundwater resources and introduces harmful chemicals and pollution to the already depleted groundwater tables. Earlier this month, these issues again came to the forefront as the Associated Press gathered data about water pollution complaints from states that allow fracking operations. In this piece, I would like to review the environmental concerns related to fracking and water quality. Also, I will address whether the potential dangers of fracking outweigh the economic and national security gains that the practice gives us. We would like to hear your opinion on this subject, so please feel free to leave a comment at the bottom of this blog. 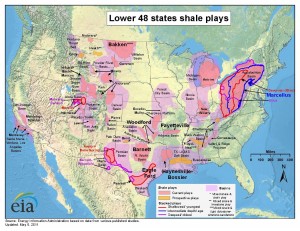 Fracking is no doubt a contentious issue. When I was doing research on this topic, people either believe that the process is the future of our energy needs or the downfall of America. Even segments on the CBS Evening News or 60 Minutes  find little common ground between these two sides. So where does the truth lie? Probably somewhere in between, and it depends on whom you ask. There is no doubt that natural gas production in the United States provides us with an economic boost. The economic crisis that began in 2008 crippled a host of industries across the United States. However, states that have large-scale natural gas production had much lower unemployment rates than the national average. For example, the Bureau of Labor Statistics shows that North Dakota has the lowest unemployment rate in the United States at 2.6%, compared to the national unemployment rate of 6.7%. The state also boasts a $1.6 billion budget surplus as I mentioned in a post on North Dakota’s Fracking Operations in November.

Unfortunately, the process of extracting natural gas from formations in the United States can cause some environmental challenges, particularly related to water resources and water quality. Fracking uses massive amounts of water and can be a strain on the water resources in the regions where fracking is employed. According to a recent study that San Jose State University conducted in the Marcellus Shale in Pennsylvania, wells required between 4.1 and 5.6 million gallons of water to begin natural gas production. While drillers’ water demands may not create short-term stress on a basin with abundant water resources, it is causing stress on the water supplies in areas experiencing drought.  For example, natural gas companies use fracking in the Texas Eagle Ford Shale, a region facing serious drought challenges. A February 5th article in the San Antonio Express News, drillers in Texas use about the same amount of water per well as in Pennsylvania (4.5 million gallons on average). However, 98% of the natural gas wells in Texas are in areas of medium or high water stress, and 28% of the wells are in areas facing severe or extreme water stress.

After writing this piece, I can understand why fracking is such a contentious issue. So where do I stand? While I believe that renewable energy should continue to play a larger role in the United States’ energy production, the fact is that renewable energy cannot produce the amount of electricity we demand at affordable prices. Until technology catches up, natural gas is the cleanest alternative to fulfill our energy needs. It is in abundant supply in the United States and reduces our foreign dependence on oil. It also has a much lower carbon footprint compared to coal or natural gas.

While US-produced natural gas can provide the energy that our country needs, drilling companies also should be held responsible for operating in an environmentally sound manner. By the number of confirmed contamination cases that I mentioned in the Marcellus Shale, it seems clear that drilling companies can do more to protect the water resources in the areas that they drill. We cannot risk long-term damage to our water supplies simply because drilling companies do not want to adhere to tighter environmental regulations. Also, I am concerned about fracking operations in states that are in the midst of a drought. The water resources in states like Texas and Colorado are already under duress, and fracking operations only add to the supply challenges that these areas face. Natural gas production in the US is an important component of our energy supply. But certainly fracking can be done in a more environmentally sustainable manner that protects the water resources of the areas where drilling takes place. Finding a balance between our energy needs and environmental sustainability will be crucial to the success of fracking in the United States.