Since the beginning of the year, Colorado has been in the news because it has implemented groundbreaking legislation. Colorado was the first state (with Washington State following close behind) to legalize recreational marijuana use. Now, Colorado is focusing on another first: It is the first state to regulate and reduce emissions that occur during the drilling of a well. The legislation mandates that drilling companies repair pipe leaks that cause methane to escape into the atmosphere and to install scrubbers that capture the emissions from a well that occur during drilling. Since the release of documentaries like Frack Nation, the country has taken sides on whether the benefits of fracking outweigh the potential costs to the environment. In particular, opponents have focused on the potential for water contamination during drilling and when the used water is disposed of. But how grave are these concerns? In this post, I will address the issues surrounding water pollution and fracking, and whether fracking can be done in an environmentally responsible manner.

As I mentioned in my last post, fracking wells requires massive amounts of water to make a well operational. The water used in the well drilling at some point has to get introduced back into the environment, and there are two areas where potential water pollution can occur. The first point where water pollution may occur is during the drilling process. Please see the diagram below. Drillers bore a hole through the water table to reach the shale formations deep in the earth. Once the drill bit is in place, they inject a mixture of water, sand and chemicals into the well bore to fracture the rock and release the natural gas hidden in these formations. 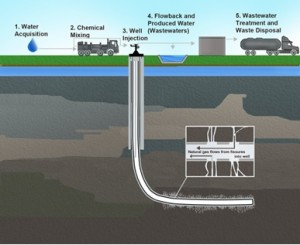 As you can see from the diagram, the well bore is lined with cement as it travels through the water table. However, if the cement is not set properly, the pipes could leak and release chemicals into the water table.

The second instance where water pollution from fracking could occur is when the drilling company re-introduces the water from the well, or “produced water” back into the environment. The environmental regulations, procedures and the level of water quality required to re-introduce the water back into the environment vary from state to state. All drillers must reach the water quality standards that the state in which they drill mandates. After the treatment, there are two main ways that drillers dispose of the water. First, the drillers could simply put the water back into a stream or river, in some instances the same river where they initially took water from. In other areas, states require that drillers force the water deep underground. Both of these processes have their potential drawbacks. If the water is not treated properly before drillers return it to rivers, the water could get into many watersheds as it travels downstream and cause pollution. Pumping the water deep underground causes less concern about contamination. However, this water will be permanently removed from the groundwater table and will have no further future use. What are the potential hazards with this type of wastewater disposal? Well, it is hard to tell.

In the last two years, a series of studies has tried to track where fracking wastewater flows to after it is discharged. The studies’ authors found this task more challenging than they had first anticipated. A study that the University of San Jose conducted in late 2013 found that in Pennsylvania, about half of the water that drillers used ended back up into rivers and streams after the drilling companies treated it. The other 50% of the water was either recycled, or shipped to other states for disposal deep underground. Questions also remain as to just how clean the water is that drillers are putting back into streams. Duke’s Nicholas School of the Environment took soil samples of areas in Pennsylvania and West Virginia near where drillers re-introduced fracking water into streams. The study found that the water near these drilling sites had radium levels in some cases 200 times higher than the control samples. Further, some of the water that was injected deep underground actually left the state. Since Ohio has less strict regulations, some drilling companies transferred water by truck from Pennsylvania to Ohio for deep injection. That water permanently leaves the Pennsylvania water table and will not increase Ohio’s water supply either because it is purposely injected deep below the water table.

What should we make of all this? I believe that much like the other fracking issues that I have discussed, the controversy surrounding water pollution and fracking lies somewhere in between the sensationalized headlines. The stories of people lighting their tap water on fire in some instances, may have merit, but in other cases may be sensationalized. On the other hand, drilling companies have not done a good job from a public affairs standpoint. Many companies have been slow to respond to regulations or have fought increased water quality monitoring. The combined water pollution and supply issues do concern me. Drillers can implement technologies that will decrease the chances of contamination both during and after drilling. Fracking does provide us with a cheap, abundant and domestically produced energy supply. But that does not give drilling companies the right to cause harm to the environment in the process. In next week’s post, I will look at some innovative technologies that companies are implementing to reduce the chances of pollution related to drilling. With these technologies and adherence to regulations, I believe we can reap the benefits of fracking in the United States while limiting its negative effects.