Last week, I wrote a post about how water politics helped to shape the primary elections in Nebraska. Nebraska, like many areas in the Western and Midwestern United States is facing a prolonged drought. The drought has an effect on everything from fracking policies to the prices that you pay in the grocery store. In today’s world, we are more inter-connected than ever – a change or a hiccup in one region or market can quickly have ripple effects in another area. We have to look no further than the housing crisis that led to the recession in 2008 for an example of this phenomenon. A crash in the US housing market caused much more global pain due to the incredible interconnectivity our modern financial systems have. The water industry and related fields such as agriculture and oil services are no different. Drought in one part of the world (namely the Western United States) can have a dramatic effect on policies and the prices of everything from groceries to oil. In this piece, I will focus on the drought in the Midwestern United States, and why we should care about its effects.

Kansas lies at the heart of the drought crisis in the Midwest. While Nebraska’s water woes played into last week’s elections, the heart of the drought is affecting Nebraska’s neighbors to the South. Southwestern Kansas and the panhandles of Oklahoma and Texas are bearing the brunt of the drought (please see the image below for the latest US Drought Monitor updates). All but a very small portion of Northeast Kansas faces some levels of drought. Vast swaths of Southwest Kansas face severe to exceptional drought. 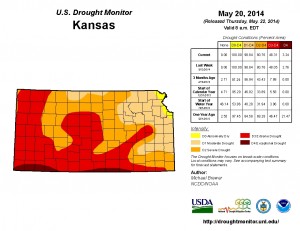 The drought in the Midwestern United States affects all of us because the region is a vital part of our nation’s breadbasket. Kansas in particular is one of the largest agricultural producers in the United States. According to a May 1st Wall Street Journal  article, Kansas produces by far the most winter wheat in the United States. In 2013, Kansas produced 319.2 million bushels of winter wheat. Washington State came in a distant second, with 114.5 million bushels produced in 2013. Both Oklahoma and Texas (which face similar drought conditions as Kansas) are in the top-5 winter wheat producing states in the nation. In these states, farmers worry that limited spring rains could put further pressure on the dwindling wheat crop. Some areas of Southwestern Kansas and the panhandle of Oklahoma saw less than one hundredth of an inch of rain in the last 6 months. The drought has pushed crop yields down drastically as both wheat and corn struggle to grow in these parched areas. Last winter, the US winter wheat cropped averaged a yield of 47.4 bushels per acre. For this year’s crop, the US Department of Agriculture estimates that Kansas will yield an average of 33.2 bushels per acre. Oklahoma Grain and Feed, a trade association, estimates that Oklahoma’s crop may fall 37% from last year’s output. The drought in these areas could cause constricted wheat supplies and higher prices in the grocery store. However, the challenges that are causing wheat and corn price spikes are not just restricted to the United States.

In our inter-connected world, foreign affairs matter, and they have also affected the price of corn and wheat in the US. How do recent current events affect our food prices in the United States? One word – Ukraine.  Since February, flare-ups in hostilities between the two nations have increased dramatically. While the tensions have not risen to full-scale war, western nations have kept a very close eye on this nation. It is a critical nation for a few reasons. First, much of Russia’s vast oil and natural reserves that are sold to Europe flow through the Ukraine. Also, both Russia and the Ukraine are major corn and grain exporters. According to the US Department of Agriculture, the Ukraine will be the fifth largest wheat exporter and the third largest corn exporter in the world in 2014. The country exports 16% of the world’s corn. Russia and Ukraine combine to sell 17% of the world’s grain. Commodities traders fear that continued hostilities could slow the amount of exports from these countries and constrict world supply. Add on the projected decreased supply from the crops in the United States, and you have a recipe for higher corn and grain prices across the board.

Both the drought in the US and the tensions in Ukraine have already affected prices for corn and wheat. According to a March 4th article in the Wall Street Journal, wheat prices jumped 4.6% on that day, the largest single-day gain in over 17 months. The price of wheat has not looked back since. At that time the price of wheat sat at around $6.00 per bushel (see the chart below for pricing). Since then, prices made a steady push from $6 to $7, and remain elevated. 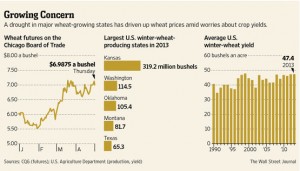 So what is the takeaway from all of this? First, the world today is incredibly interconnected. A drought in Kansas and fighting halfway across the world in the Ukraine can have serious repercussions on everything from food prices to water policies. Second, both the threat of drought and the threat of geopolitical tensions will likely remain with us for some time. We must better plan and prepare for the disruptions that both of these risks may bring. While we can’t prepare for the “unknowns” that political tensions may bring, we can take action to better prepare for droughts in our nation. Building larger and more adequate water storage facilities will allow us to fallow less land during severe droughts. Investing in more efficient irrigation systems and making advancements in more drought-tolerant plants will allow us to use more with less. Droughts will be an unfortunate and likely component of the future, but they don’t have to control us. With better long-term planning, we can go a long way to alleviate some of the challenges that they bring.