Do you believe an Aggie or a Red Raider?

The Los Angeles Times recently ran a story on the September torrential rainfall in Texas: Rain pounds Texas: A sign the drought is ending?

“This could be the start of the end of the drought,” said state climatologist John Nielsen-Gammon, a professor of atmospheric sciences at Texas A&M University.

“We’ve been behind on rainfall for several years in West Texas. We have thirsty watersheds.” “We need multiple, wetter years,” said Ken Rainwater, former director of the Water Resources Center at Texas Tech University.

Well, this is one Aggie-Red Raider dispute that can’t be settled on the gridiron.

Let’s look at the question in two ways.

With this background, let’s look at data on the elevation of Well J-17 (which is published daily by the Edwards Aquifer Authority www.edwardsaquifer.org).

San Antonio has been in critical management periods for most of the time since 2011 (see figure). Generally speaking, the elevation of Well J-17 reaches a low in the fall (when the irrigation season ends) and reaches a high in the following spring (when the irrigation season starts).  Reflecting the multiple-year drought in Texas, both the annual highs and lows for the elevation of Well J-17 have been progressively lower. 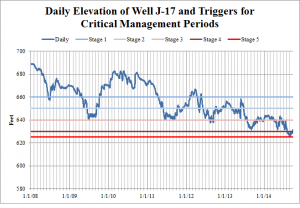 The downpour in late September as well as the wind down in the irrigation season caused a “bump” in Well J-17 elevations out of Stage 5 restriction territory. Is an elevation of more than 640 feet in the near future (Stage 2)?  Or even higher elevations?

A second way to look at the issue is join the Stratecon Water Policy Marketplace and look at the “Well J-17” prediction market.  Which stage of restrictions will the San Antonio Pool be in on April 1, 2015?  Come on Aggies, Stage 1 or Stage 2?  What about you Red Raiders: Stage 3, Stage 4 or Stage 5.  What do Longhorns think?  Non-Texans?

You don’t need to be an expert on hydrology to participate. The “wisdom of crowds” is smarter than experts (Google it!).  It’s free.  It’s anonymous. Try it.