This winter continues to be the tale of extreme weather patterns. In Boston, the City experienced its snowiest February ever, (Boston has weather records dating back to around the Civil War) and the grand total of snow this winter is less than 2 inches off of the all-time cumulative record set in the winter of 1995-1996. The subways and commuter trains in the City have run on modified schedules for weeks. Some above-ground tracks may not get fully cleared until the end of March. Economists estimate that the series of winter storms caused $2 billion in economic damages to the City of Boston alone.

Here in California, we have the exact opposite problem. The “ridiculously resilient ridge” of high pressure (yes that is an actual meteorological term) has kept storm after storm out of the Southwest United States and has kept large parts of the West Coast unseasonably warm. In late February, Anchorage, Alaska hit a record high of 44 degrees.

These weather anomalies are causing more than just hot temperatures in the West, and hot tempers in the East as residents there dig out of mountains of snow. The drought is causing sustained economic damages here in California. UC Davis Professor Emeritus of Agriculture David Howitt projects that California will face $3 Billion in economic damages from the 2015 drought. He said, “There’s going to be significantly more pain this year than there was last year. I would be very surprised if the economic impact was less than $3 billion.” The allocation reports for the State Water Project and the Central Valley Project corroborate Professor Howitt’s prediction for more pain this year. In this piece, I will look at the allocations for both the State and Federal water projects in California and make sense of what might transpire from these announcements.

On March 2nd, the California Department of Water Resources increased the projected allocation of the State Water Project from 15% to 20%. In mid-February, Rod Smith predicted in a piece that the final State Water Project allocation would be 21%, nearly spot-on with the update that the California Department of Water Resources released in March. While California missed many of the storms that are pounding the East Coast, the few storms that did hit the Golden State did help some reservoirs to re-fill. During the storms in December and February, the Department of Water Resources was able to capture runoff and pump it into the San Luis Reservoir near Los Banos. As you can see in the graphic below, the San Luis Reservoir increased from approximately 400,000 AF of storage in early November to 1,293,156 AF at the end of February, 2015. 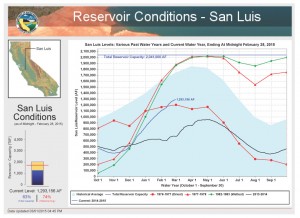 Unfortunately, the terrible snowpack conditions offset the better reservoir conditions data that we received this week. On March 3rd, the Department of Water Resources also conducted its updated snow survey. DWR found that the water content in the snowpack during their annual survey stood at only 19% of average this time of year. These snow readings put California snowpack near historic low levels we saw in 1977 and 1991. DWR Chief of Snow Surveys David Rizzardo said, “However you slice and dice it, we are at or below the driest year. There doesn’t seem to be any March miracle in the forecast. It’s extremely unlikely that we will pull out of it this year.”

It is important to note that the SWP allocations are not final. In the press release from DWR that I alluded to earlier, SWP Deputy Director Carl Torgersen points out that DWR may revise allocations depending on the changing hydrologic conditions this spring. But barring a very late “March Miracle,” the hydrologic conditions are not likely to get much better. The State Water Contractors as such will get significantly less water delivered than they could in a full-year allocation. Beyond the lack of snow and water storage, the issues surrounding the Bay Delta and the pumping restrictions to protect endangered species means that even in wet years, it is extremely difficult to deliver 100% of SWP supplies. This year, the State Water Contractors and those end users that rely on this supply will feel the pinch. For example, Metropolitan Water District of Southern California has 1,911,500 AF of contractual rights from the State Water Project. If this allocation holds, the SWP will only deliver 382,300 AF of entitlement to them. But at least this project is delivering something….

While the Department of Water Resources sees a very slightly rosier picture of hydrologic conditions in California than they did at the time of their first projected allocation, the US Bureau of Reclamation did not decide to raise their allocation to the Central Valley Project. For the second year in a row, the Central Valley Project will deliver a zero percent allocation to agricultural users that rely on these supplies. Municipal and industrial service contractors North of the Delta will receive enough water to cover health and safety requirements. The Central Valley Project relies on runoff from the snowpack and water stored in reservoirs such as Shasta, Trinity, Folsom, Millerton and New Melones. As you can see in the graphic below, the conditions in these reservoirs are in most instances well below average. The Manteca Bulletin points out that the New Melones Reservoir will likely dry up by the fall, and the Stanislaus River may run dry as early as June or July. As such, the Central Valley Project cannot deliver any water to agricultural users this summer. 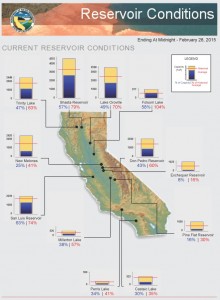 Whether you want to call the slight increase in the projected SWP allocation “good news” is up for debate. What is for certain though is that California faces its 4th critically dry year. Thousands of farms and millions of people rely on these two projects for critical surface water supplies. Cities and famers alike will likely have to conserve or scramble to find alternative water resources. An article on CNBC this week quoted Central Valley farmer Mark Borba who expects that banked groundwater may sell for between $1,500 and $2,500 an acre-foot as farmers with permanent crops scramble to keep their investment alive. No matter what, California will face another extremely challenging summer.