What do Jennifer Lopez, Kim Kardashian and Jessica Simpson have in common besides their omnipresence on television and in the tabloids? A recent CBS Los Angeles report found that, despite the Governor’s mandatory water restrictions in early May, these celebrities still have beautifully green manicured lawns at their LA-area homes. The article points out that while the new water reductions are mandatory, the $500 penalty for not complying with the usage reductions is “pocket change” for celebrities such as Kardashian. (Indeed, Kardashian apparently spent an estimated $12 million at her 2014 wedding to rapper Kanye West. She could pay the $500 fine for 80 months just to equal the $40,000 her high heels at the wedding cost.) Elsewhere in Los Angeles, the landmark Mormon Temple in West LA stopped watering the vast lawn on the 13 acre site about a month ago when Governor Brown began discussing water restrictions.

These two cases show the seemingly opposite reactions that citizens of the Golden State have towards the drought. On the one hand, organizations like the Mormon Church are taking the drought measures seriously, allowing a once lush and expansive lawn to go brown. On the other hand, celebrities (and anecdotally I would imagine many other people across the state) have not adjusted their behavior to address the drought conditions in the state. In this time of drought, can mandates from the government alone change behavior enough to decrease water consumption by the mandate? Or will water districts across the state have to resort to changes in water pricing to affect this change? I will explore both of these topics in this piece.

The drought in California continues unabated. According to the latest US Drought Monitor Report, 46.77% of the state remains in exceptional drought. The exceptional drought category increased from 32.21% at the beginning of 2015. At a time where reservoirs across the state should be filling up from snowmelt, reservoir levels are actually dropping. The Department of Water Resources cancelled the May snow survey after the April survey found no snow at that date for the first time in its 70-year history. 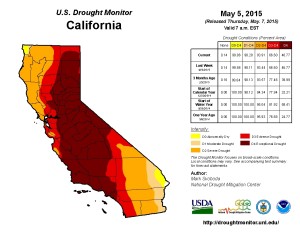 In this context, the State Water Resources Control Board (SWRCB) announced the first urban water use limits in state history on May 5th.  The new cutbacks do not affect each water district equally. Theoretically, the State Water Resources Control Board wanted to reward the areas of California that had already implemented water savings programs and place more of the burden for new water cutbacks on areas that had not. As such, the SWRCB assigned each water district with over 3,000 connections a conservation goal of between 8% and 36% that they will have to reach. (Please click here for the full list) Each water district will have the authority to impose measures to meet these goals. The mandatory goals will be in effect from June 1st until February, 2016. Cities and water districts that do not meet these goals may face fines of $10,000 a day this summer.

So how will cities achieve this goal? It depends on what the city decides to implement. For example, Newport Beach must reduce its water usage by 28%. The City enacted a Level III water conservation plan. Under the plan, residents cannot water lawns between 9 AM and 5 PM. They can water lawns twice a week from April to November, and once a week from November to March. Residents may not fill pools more than 3 inches per week and may not water lawns for 48 hours after rain. Many cities in California have also implemented tiered water rates to encourage citizens to use less water. However, a recent court case calls into question the legality of this program and another important way that cities have tried to curb water use.

Tiered Rates – What is Their Future in California?

Cities across California have used tiered water rates for years as a way to encourage water conservation. The idea is simple: the first amount of water on your bill is set at a certain rate per unit. As water usage increases past certain thresholds, the rates for these new “tiers” become higher per unit. Tiered water rates theoretically encourage citizens to use less water because increased water usage hurts their pocketbooks. According to the Sacramento Bee, about two-thirds of water districts in California have some type of tiered rate structure. However, a recent court case puts the legality of tiered water rates into jeopardy.

In late April, the California 4th Appellate District handed down an opinion the case Capistrano Taxpayers Association v. City of San Juan Capistrano. The case dealt a blow not only to the City of San Juan Capistrano’s tiered water rates, but also the tiered water rates of every water district in California that uses them. The case hinged around the interpretation of California Proposition 218, which in essence protects ratepayers from municipalities charging over and above the cost of service. The Capistrano Taxpayers Association argued that the higher water rates in the upper levels of the tiered rates charge customers for more than the cost of service. The court agreed with this argument. In the opinion, the court wrote, “We do hold that above-cost-of-service pricing for tiers of water service is not allowed by Proposition 218, and in this case, [the city] did not carry its burden of proving its higher tiers reflected its cost of service.”

Reactions to the court ruling were swift. Governor Jerry Brown said in a statement that, “The practical effect of the court’s decision is to put a straitjacket on local government at a time when maximum flexibility is needed.” I can understand both the court’s and the governor’s opinion on this issue. On the one hand, the court has to interpret the law, not make a decision on the “practical effect” of their judgment. We similar circumstances in almost every court opinion on pumping restrictions related to the Delta Smelt, and the economic ramifications that decreased pumping may cause. In all of these cases, it is not the job of the courts to weigh the economic and social impacts of their decision.

On the other hand, the Governor is right – local governments need as much flexibility as possible to get their citizens to reduce water consumption. As I mentioned earlier in the piece, the State Water Resources Control Board largely left it up to local governments to determine how they will reach the mandated water reduction targets. Citizens likely will not voluntarily reduce water to the extent the new mandates require (just look at Kim Kardashian’s lawn!). For now, it looks like cities may have to battle the drought with one less arrow in their quiver.