As California slogs through the fourth year of unprecedented drought, all options are on the table to provide new water supplies to the drought-parched state. Last week, I wrote about recycled water and its potentially increased role in the Western United States’ water supply. In the post, however, I cautioned that the high costs associated with this water as compared to surface water supplies during “normal” rainfall years may make the implementation of widespread recycled water programs economically infeasible. Also, I alluded to the fact that the public sometimes has an aversion to recycled water programs due to phrases such as “toilet to tap” to describe the process of turning raw sewage into drinkable water. (Even some popular shows have discussed the theme. The Tonight Show with Jimmy Fallon had Bill Gates on as a guest, and he and Jimmy Fallon drank water from the Janicki Omniprocessor, a machine that can create clean water from sewage in minutes. Gates hopes to send these machines to areas across the globe to cut down on diseases due to inadequate sanitation systems.)

Despite the potential challenges that new water supply sources such as recycled water pose, California must look at any and all options it has at its disposal to create new water supplies. In addition to looking at increased recycled water use, many jurisdictions across California are looking at ways to build infrastructure to capture increased amounts of stormwater. These projects range from small, residential projects to much larger systems that can divert water from major storm drain channels. While some of these projects may have the potential to provide increased water supplies for communities to use in times of drought, they are not without their drawbacks. In this post, I will address the opportunities and challenges that building increased stormwater capture facilities will bring to the state, and discuss the best ways that the state may use its financial resources to build this infrastructure.

Sending Water to the Ocean – Is that the Best Idea for Parched California?

I sometimes go into Downtown Los Angeles for meetings, and coming from the east, I must cross over the Los Angeles River to get to downtown.  As you can see from the picture below, what greets me when I cross the Los Angeles River near downtown looks nothing like a river. Rather, the LA River and its tributaries are mainly channelized, concrete storm drains with a vast network of infrastructure that collects stormwater. According to the LA Watershed Protection Program, the LA River is approximately 55 miles long. Of that stretch, only 5.5 miles of the River are soft-bottomed – a 3.1 mile stretch adjacent to the City of Los Angeles called the Glendale Narrows and a 2.4 mile portion in the Sepulveda Basin Recreational Area. When engineers designed the system, they were looking for maximum efficiency to get stormwater off of the land and to the ocean. However, in times of severe drought such as this, the cities that storm drain channels such as the LA River run through are realizing that they are letting a potentially valuable water resource flow directly out to the ocean. New planned infrastructure aims to change this, and Los Angeles hopes to be the model for stormwater capture infrastructure in the state. 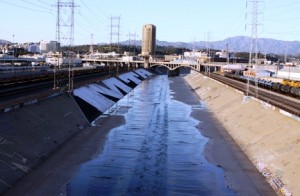 In May and June, the City of Los Angeles and associated districts took steps to address stormwater capture. First, LA Mayor Eric Garcetti signed a $40 million runoff treatment program to prevent stormwater from running untreated into Santa Monica Bay. The project will collect stormwater from the region’s network of storm drains near Los Angeles Airport and divert it to the Hyperion Water Reclamation Plant. Los Angeles will then send the treated water to percolation ponds to supplement groundwater supplies. The Mayor’s office estimates that this project could increase water supplies by up to 100 million gallons per year.

Los Angeles is also planning for similar future projects. In late June, the Los Angeles Department of Water and Power, in conjunction with the Metropolitan Water District and the LA County Flood Control District updated its Stormwater Capture Management Plan. The Plan, if implemented, may increase stormwater collection by 25,000 acre-feet per year by 2035. At buildout, these projects could add up to 200,000 acre-feet of average annual capture volume. LA will achieve this plan by both regional and sub-regional projects. Potential projects include dam and spreading basin improvements at the regional level, and guidelines to add retention basins into new development, parks and open space at the sub-regional level.

Mayor Garcetti and supporters of these projects are optimistic that the new infrastructure will add supply and help to remediate environmental issues. Currently, the stormwater from around the Los Angeles Airport goes untreated into the Santa Monica Bay. Environmental groups such as Heal the Bay argue that clean water is good for both the environment and the economy, as clean water will provide a new supply and a cleaner Santa Monica Bay will promote tourism. Mayor Garcetti said in a statement, “We must reimagine our relationship with water. We must be responsible with how we treat it, across its entire cycle. We can no longer afford to let storm water run off as pollution into our ocean.” However, not all groups are as enthusiastic about the prospects of these programs.

What are the challenges for these types of projects?

As with recycled water, increasing stormwater capture may play an important role in providing increased water supplies during times of drought. However, these types of projects come with challenges as well. First is the environmental challenge that cleaning stormwater, particularly from urban areas such as Los Angeles poses. Greater Los Angeles has many square miles of asphalt, concrete and impervious surfaces. When it rains, particularly during the first storm after it has not rained for a while, the rainwater picks up trash, spilled fuel and oil, and anything else left on impervious surfaces. The contaminants are in the water and must be removed before the water can percolate into the ground. The Los Angeles Enhanced Watershed Program Management Plan establishes maximum pollution limits (called TMDLs or Total Maximum Daily Loads) and best management practices (BMPs) for removing the pollutants from the water. These BMPs range from green infrastructure such as bioswales and vegetation that can filter stormwater pollutants to filtration systems and permeable pavement. These infrastructure programs face a catch-22: they can either capture the water on land and have to mitigate the pollution issues there, or they can send it out to the ocean and deal with the pollution challenges that option poses. Further this new infrastructure to capture and clean stormwater costs money, and some cities within LA’s program service area are concerned about how they will foot the bill.

As with recycled water or desalination, there is a cost associated with building the infrastructure necessary to capture and filter stormwater. Some cities are concerned that the costs associated with this infrastructure will be too much to bear. During the hearing that made the revisions to the stormwater discharge permit I referred to earlier, a few cities expressed this exact concern. According to the Los Angeles Times, Gardena City Council Member Dan Medina said that the permit revisions could “bankrupt our city and probably force it into a disincorporation.” Medina cited a consultant’s report that compliance with the new rules could cost between $12 and $24 million annually, a crushing cost to a city with general fund revenues of approximately $50 million a year.

Will stormwater break the drought or the bank?

I believe that increased stormwater capture is a critical component to California’s overall strategy to combat long-term drought. The effects of climate change will force us to address this issue. Last winter, Northern California experienced some of the rainiest December months on record, but most of the precipitation fell as rain. Snowpack acts as a natural storage facility, slowly releasing water as temperatures rise. Last winter, much of the precipitation fell as rain and quickly drained off of the land and into the ocean. If climate change will continue to persist as some scientists predict, we will have to build increased infrastructure that can capture this water source.

However, this has to be done efficiently. We have to recognize that there are limited financial resources to commit to these projects and like recycled water, should only go to the projects that can provide water storage and stormwater capture in the most efficient manner. Water banks, such as the various ones located in the Central Valley could provide the storage space necessary. This winter, forecasters are growing more confident that an El Nino pattern will form to help break the drought. But it is unlikely that even with same amount of rainfall that California experienced in 1997 and 1998 that the drought will totally ease. If California receives a deluge, we will need to use every available project to capture this water. In the future, we will have to plan more effective projects that balance the need to capture stormwater with the cost constraints the of the State’s budget.