As 2016 begins, climate researchers remain optimistic that the El Niño pattern that began to build last fall will hold and will generally deliver wet weather across areas of the US facing some of the worst drought conditions such as California. At the January 8th Operation Sierra Storm Conference in Lake Tahoe, Sasha Gershunov, climate and meteorology researcher at Scripps Institute of Oceanography in San Diego said that, “So far we’ve got out of this event exactly what we expected.” From the initial snow survey on December 30th, California’s mountain snowpack is currently at 136% of average, and many parts of the state received precipitation during the first two weeks of the year. Unfortunately, while the initial snow survey results represent a good start, (especially in comparison to last year’s record low snowpack) the precipitation has not made an appreciable dent in the drought conditions across much of the Western United States. According to the most recent US Drought Monitor conditions, despite appreciable rainfalls, severe drought continues to cover parts of California, Nevada, Oregon, Idaho and Montana. The severity of California’s drought has not yet decreased dramatically either. The land area of exceptional drought (the most severe category) fell from 44.84% last week to 42.66% this week. 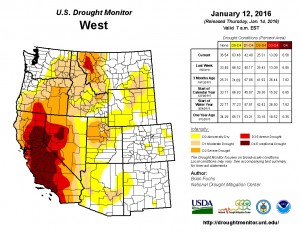 While weather forecasters expect that areas of the Western United States will continue to see periods of heavy precipitation going into February and March, other parts of the Western US may not see as much relief from abundant rains. In this post, I will review how forecasters believe El Niño will affect the Northwest US, and in particular its potential effects on the drought conditions in Oregon.

El Niño Does not Mean That Everywhere Gets Abundant Rainfall

As I conducted research for this post, a few key points stood out to me about El Niño events. First, no two of these patterns are alike. While scientists and pundits have made direct comparisons to the winter of 1997-98, others caution that the conditions of the ocean and atmosphere are much different now because average global temperatures are hotter. The periods of rain that fall also do not come evenly. The San Diego Union Tribune wrote an interesting article this week on why the weather patterns in Southern California shifted from significant amounts of rain in the first week of January to drier conditions this week. The article pointed out that the wet weather has shifted further north, and that periods of dry conditions are not uncommon during an El Niño cycle. For example, in 1997-98 (a strong El Niño year) Southern California had no major storms from December 9th to January 8th. In 1982-83, no rain fell from December 30th to January 16th, and the first major storm did not hit Southern California until January 27th.

Further, El Niño does not spread plentiful rainfall equally across all parts of the Western US. Despite higher than average precipitation totals this winter for some parts of the Northwest, El Niño usually causes drier conditions in the region as the winter progresses. The National Oceanic and Atmospheric Administration’s long-term weather map shows that areas of Oregon, Washington, Idaho and Montana have a 40-50% chance of receiving below average precipitation through the middle of March. Higher temperatures may also accompany the lower precipitation levels in some areas of the Northwest. For example, the Washington State Office of the Climatologist estimates that the state will have a 60% chance of seeing higher than average winter temperatures. This could have significant impacts on the water supplies of these already-parched states. As is the case in much of the Western United States, a healthy snowpack remains the most important source of water storage. Snow melts slowly, releasing water for consumption over time. Warmer temperatures could decrease the snowpack and increase the likelihood of flooding if significant rains occur when temperatures are above freezing. As of now, some states in the Northwest are cautiously optimistic about the precipitation they have received, but will prepare for a potential change in the weather patterns later in the winter.

Although Oregon received much less media attention regarding the drought than California, the state faced similar weather patterns that California had during this drought cycle. According to the Capital Press, nearly half of Oregon’s long-term monitoring stations reported record low snowfall totals in 2015, pushing many parts of the state into severe drought. Three months ago, the US Drought Monitor reported that 100% of the state experienced some sort of drought conditions, and 67% of the state faced extreme drought. But a series of December storms rolled through the state, and currently the areas of extreme drought dropped from 67% to 6%. The snowpack totals in some areas are already outpacing the totals Oregon received for the entire winter. For example, as of December 29th, almost 7 feet of snow had fallen at the Timberline Lodge on Mount Hood, and the snow contained 21.5 inches of water content. At peak annual snowfall in April, 2015, the snow at Timberline contained only 20 inches of water content. 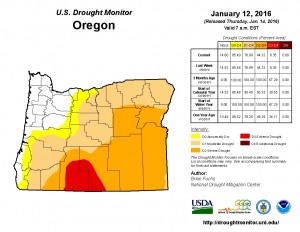 Oregon officials area happy with the start of the snow season, but also admit that it is much too early to determine the outcome of the drought the state is facing. The Climate Prediction Center (CPC) forecasts that the cold and snowy conditions Oregon is experiencing now may switch more to a warmer and drier pattern that is more typical for the region in an El Niño. U.S. Natural Resources Conservation Services Hydrologist Julie Koeberle said, “This is a great way to start. To be already better than last year is a little bit comforting. Normally, during most El Niños, it would be warm and dry and we just would not have gotten any precipitation at all. I am concerned that January could bring us warm and dry conditions based on the CPC forecast.”

A good start, but the winter has just begun

In some parts of the Western United States, snowfall totals have already surpassed the totals for the entire winter of 2015. Climate researchers are hopeful that the weather conditions will help to alleviate the severe drought conditions across much of the region. But they also recognize that one year’s rainfall likely will not reverse all of the losses that the prolonged drought has on states such as California. Further, each El Niño pattern has different characteristics. The winter precipitation of 1997-98 tracked differently than the El Niño storms in 1982-83, and it is likely that this winter’s storms will look different again. This winter’s storms have already tracked differently than past El Niño events.  ABC News reports that a persistent Pacific jet stream has so far generally tracked further north than is normal for an El Niño winter, and this phenomenon has been primarily responsible for the higher than average precipitation in the Pacific Northwest. Long range forecasts however predict that this phenomenon may revert to a more “typical” El Niño pattern towards the end of January, potentially drying out parts of the Pacific Northwest.

The bottom line is that the exact track and severity of El Niño events are hard to predict, and conditions can change rapidly. Further, forecasters must contend with the variable of higher average global temperatures than during the last strong El Niño in 1997. We cannot predict the exact outcome of this winter’s precipitation. But we can prepare now to limit the damage that potential flooding may cause and to capture as much rain as possible to replenish our depleted reservoirs and groundwater supplies.