At 1:04 AM on the morning of June 10th, a magnitude 5.2 earthquake hit Borrego Springs, CA, in eastern San Diego County. The earthquake along the San Jacinto Fault triggered hundreds of smaller aftershocks and residents as far away as Los Angeles could feel the shaking. I live approximately 100 miles away from the epicenter, and it woke me up. The earthquake caused renewed discussions among seismologists and the media about whether “the big one” will hit any time soon. We expect earthquakes in Southern California, but when we talk about Oklahoma, it is not a place that usually comes to mind when we think of active earthquake regions in the United States. However, just one day before the magnitude 5.2 quake in California, Oklahoma experienced 3 earthquakes, the largest of which was a magnitude 3.7. These earthquakes in Oklahoma are not an isolated incident.

Just two days prior on June 7th, the US Geological Survey reported six earthquakes that day ranging from 2.5 to 3.6 in western and central Oklahoma. So far in 2016, the US Geological Survey has recorded eleven earthquakes above magnitude 4.0 in in the state. Eight out of the 11 earthquakes measured above magnitude 4.0 were in Fairview, a small city northwest of Oklahoma City. Moreover, eight out of the 10 strongest earthquakes in Oklahoma’s history have occurred between 2011 and 2016. The other two strongest quakes were very widespread in terms of time, occurring in 1952 and 1882. What is causing this dramatic increase in seismic activity in Oklahoma? Some scientists argue that the widespread increase in hydraulic fracturing and the injection of used fluids into waste wells over the last five years is causing the increase in seismic activity. The increase in seismic activity has pitted oil and gas companies against environmental groups and citizens arguing that hydraulic fracturing is causing undue stress on the environment and properties across the Sooner State. But what can be done to decrease the temblors in the state? In this two-part series I will address some of the scientific evidence behind the link between fracking and increased earthquakes in Oklahoma in part I, and what may be done to help resolve these issues in part II.

Oklahoma is the new California for earthquake activity

Until a few years ago, Oklahoma was a seismically inactive part of the United States despite the fact that the region has fault lines running through it. Between 2000 and 2008, Oklahoma experienced at most three earthquakes above magnitude 3.0 annually. But in 2009, earthquakes above magnitude 3.0 started to increase dramatically. As the graph below shows, the number of 3.0+ earthquakes in 2009 increased from 2 to 20, and continued to increase from there. In 2014, the Sooner State passed California as the most seismically active state. That year, Oklahoma was more than 3 times more seismically active than California; it experienced 562 magnitude 3.0+ earthquakes versus California’s 180. 2015 ended even higher with 907. The Oklahoma Geological Survey said that before 2009, the state averaged 1.5 earthquakes of 3.0 magnitude or greater each year. Currently, the state is experiencing on average 2.5 earthquakes of the magnitude 3.0+ each day, about 600 times the historical averages.

Clearly something has changed to trigger the massive increase in frequency of earthquakes in the state. Scientists point to the increased use of hydraulic fracturing and more importantly, the increased prevalence of injection wells for produced water. Hydraulic fracturing, or “fracking” as it is known pushes a mixture of water, sand and chemicals down a well at very high pressure to create fissures in rocks that release oil and natural gas. As a well is made, much of the fracking fluid called “produced water” returns to the surface where well operators must dispose of it properly. In many instances, the produced water contains salt and other chemicals that make the water unsuitable for potable water uses. Oklahoma allows the use of injection wells (but as you will see, the regulations are actively evolving) which forces the produced water deep into underground aquifers, generally below the water table used for drinking water and irrigation. The water is pushed into these deep underground aquifers under pressure, and scientists believe that this is contributing to the increased earthquake activity in the state.

The pace at which growth in oil and gas production occurred may also be contributing to Oklahoma’s challenges. From 2010 to the peak of the current cycle in the oil and gas market in 2014, (since then the oil and gas prices have fallen from over $100 a barrel to approximately $47 a barrel currently) the Oklahoma State Chamber of Commerce estimated that oil production about doubled to 120 million barrels annually and natural gas production increased 50% to 2.2 trillion cubic feet per year. During the run-up, the state also saw a commeasurable increase in the number of injection wells across the state. 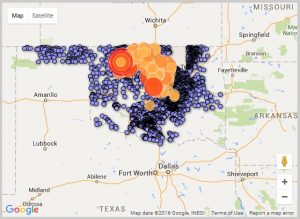 A 2015 Stanford University study showed that some areas with increased injection well usage above faults also have experienced increased seismic activity. The map above from the Oklahoma Office of the Secretary of Energy and the Environment shows the approximately 11,700 statewide injection well sites in blue dots overlaid with the 2016 earthquakes in orange and red dots. As the map shows, while injection well sites are spread out across the state, the majority of the earthquakes in the state are centered in an area generally to the north and east of Oklahoma City. Scientists believe the areas showing the greatest increase in seismic activity have both naturally active faults and have seen some of the biggest increases in produced water injection activity. The Stanford study reported that the three areas of the state that have seen the greatest increase in seismic activity also have seen marked increases in wastewater disposal. These areas have collectively increased produced water injections from 1.6 million barrels per month in 1997 to more than 33 million barrels per month in 2013.

However, scientists are still trying to determine why earthquakes have occurred in specific locations and at points in time. For example, the largest earthquake recorded recently in the Midwest was a magnitude 5.6 in 2011 centered near Prague Oklahoma. Interestingly, Prague had active injection wells for 17 years prior to 2011. Theories suggest that cumulative injections over time finally pushed the fault beyond a critical pressure threshold and caused the fault to slip. So while the science is pretty clear that injection well activity is at least partially causing the increase in earthquakes, it is not clear as to why specific earthquakes happen when and where they do.

The spike in seismic activity across the state is causing concern among citizens whose houses are rattled frequently, regulators unsure how to respond, and oil companies unsure how future regulations in the state may affect them. Over the long-term, what can be done to address these issues?  I will discuss both items in my next post.