Last winter, California was supposed to bear the brunt of a “Godzilla El Niño” that would go a long way towards alleviating the drought here. Instead, a host of atmospheric conditions largely sent storms that most meteorologists predicted would hit California to the Pacific Northwest. As such, Northern California, Oregon and Washington experienced the majority of the storms while Southern California largely remained warm and dry. The winter storms helped to alleviate the drought in Oregon, but not completely erase it. According to the US Drought Monitor, extreme drought covered 67.29% of Oregon a year ago and 67.96% of Washington State. Currently, 32.78% of Oregon and 92.09% of Washington are drought free. Only 2.63% of Oregon’s land area has severe drought; Washington has none. During the winter of 2015-16, storms that many meteorologists initially believed would “bust the drought” in California eventually tracked to the Pacific Northwest. From December 1, 2015 to March 1, 2016, Seattle received more than 25 inches of rain – one of the soggiest winters on record. However, the lingering effects of the drought remain in both states. Low reservoirs, drought-affected forests and tough growing conditions have all presented challenges to the Pacific Northwest.

Last year, the weather pattern that was supposed to drench Southern California and keep Washington relatively dry completely reversed itself. Now, weather forecasters expect that a mild La Niña could bring another deluge of storms to the Pacific Northwest, much to the delight of the skiers and snowboarders headed there this winter. As we saw last year though, early expectations of weather patterns completely reversed as the winter progressed. Could this winter’s actual patterns vex forecasters again? I will address these items in this week’s post.

Lingering Effects of Drought in the Northwest

Despite healthy rainfalls across much of Washington and Oregon last winter, both states still face lingering effects of long-term drought. In Oregon, this week marks the 5th year of the start of this drought cycle. In Washington, the state has not been drought-free since the week of April 30, 2013. The prolonged drought has had negative effects on stream flows and reservoir conditions in each state. According to the State of Washington Department of Ecology, 48% of the state’s rivers and streams were below average flow rates in September 2016. In the summer of 2015, 70 to 80% of the state’s rivers were below average flow rates. The lower than average streams also caused water temperatures to rise, putting further stress on the salmon runs. Fortunately for the state’s water supplies, major reservoirs in the Yakima Basin are near or above averages for this time of year according to the US Bureau of Reclamation.

Unfortunately, Oregon’s reservoirs did not fare as well in the drought. Many reservoirs in southeast Oregon are at critically low levels. According to data from the US Bureau of Reclamation, all reservoirs in the Snake River basin are below average for this time of year. For example, the Phillips Reservoir is currently at 3% of capacity, holding 2,473 acre-feet compared to 73,000 AF when full. The Umatilla River Basin also has reservoirs at below average capacity. During the peak of the drought last summer, 23 of the 36 counties in the state declared drought emergencies and more than a dozen cities in the state enacted conservation measures according to the Oregon Statesman Journal. The low water levels are causing lingering economic and environmental challenges in both states.

The Economic and Environmental Effects

Washington and Oregon have felt both the economic and environmental effects of the drought. According to the Oregon Farm Bureau, agriculture contributes $22.9 billion to the state’s economy, or 10.6% of the net state product. However, the drought and ill-timed rains this fall have caused problems for the industry. In Oregon, farmers should be harvesting their fall crops. Unfortunately, the ill-timed rains caused muddy fields, slowed down harvesting of corn, and in some instances delayed plantings of winter crops. The region still also faces some environmental challenges as a result of the prolonged drought. Christine Buhl with the Oregon Department of Forestry notes that many trees in the state’s conifer forests show signs of water stress, which can lead to other, more long-lasting complications. Even if the region rebounds from drought conditions, the trees’ defensive systems still remain susceptible to bark beetles and other invasive insects. Water stress lowers the trees’ ability to fight off insect infestations, leading to potential environmental challenges even after drought abates.

Will this Winter Provide any Relief?

While I wish that I could provide a more concrete answer to this question, the fact is that it is anybody’s guess as to the amount and location of precipitation for the Pacific US this winter. Long-term weather forecasting is a very inexact science and a whole host of inputs can make even the best of predictions turn on a dime. Last year’s forecast is a perfect example – forecasters initially thought weather conditions in California would develop that would take a substantial bite out of the drought, considering that last winter had some of the strongest El Niño conditions on record. However, atmospheric conditions steered storms north that in similar situations usually impact central and southern California. Past history is no guarantee of future results, and this mantra definitely applies to this winter’s forecasting.

So what is in store for this winter? There is good news and bad news. First the good news. Rainfall in October across Washington, Oregon and parts of Northern California broke records. In Northern California, the city of Eureka saw 9.79 inches of rain, 492% of average for October. Other cities including Oakland, Livermore and San Francisco all had more than double the average rainfall totals in October. According to the Statesman Journal, the Oregon cities of Salem, Astoria, Eugene and Portland registered the highest number of rainy days on record for October. The state’s capital, Salem received a total of 11.23 inches of rain in October, breaking the previous record of 11.17 inches set in 1947. Washington also had record-breaking rains for the month. According to , as of October 26th, Seattle-Tacoma Airport measured 8.4 inches of rainfall, very close to the 8.96 inch record set in 2003.

Further, the UN World Meteorological Organization (WMO) reaffirmed its outlook that “there is a 50-60% probability of weak La Niña conditions forming in the last quarter of 2016, and persisting into the first quarter of 2017.” In the US, the National Oceanic and Atmospheric Administration reached the same conclusion, saying that there is about a 70% chance of La Niña forming in the fall and about a 55% chance of it persisting through the winter. However, as you can see from the images below, the temperature anomalies have been erratic over the last month, and as of now conditions remain neutral (see slide 22 on the link above for historical ocean temperature data). 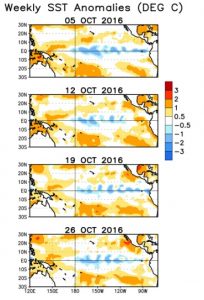 If these conditions persist and a La Niña forms this winter, the Pacific Northwest historically has seen above average rainfall. Southern California and the southwestern states such as Arizona and New Mexico tend to have lower rainfall totals and higher than average temperatures. However, there are a whole host of factors that play into what type of winter we actually experience. First, at most this winter will experience a weak La Niña. Weaker anomalies such as the one predicted this winter do not have as high probabilities of following the historical pattern of stronger La Niña years. So scientists are not certain how this winter will play out. Further, while colder water conditions exist in the equatorial Pacific, along the western coast of the US and Canada, the warm water known as “the blob” persists. “The blob” was present in 2014 and 15 when much of the Pacific coast fell into severe drought. The slug of exceptionally warm water along the Pacific Coast set up another phenomenon called the “ridiculously resilient ridge” of high pressure which steered storms away from California and Oregon and caused record breaking snow in places such as Boston.

So what will happen this winter in terms of precipitation? The short answer is that we do not know definitively. Meteorologists can only make educated guesses for the winter’s forecast due to complexities of weather patterns and their uncertain effect on storms that may bring further drought relief to the Pacific Northwest. As of now, the long-term forecasts are relatively sanguine about Oregon, Washington and Northern California getting around average rainfall totals for the winter. However, the picture gets much less clear as to whether Southern California or parts of the Central Valley still under exceptional drought will get any reprieve from this winter’s storms. Only time will tell what the winter will bring.