Hydrowonk gratefully received an invitation to attend the Salton Sea Tour sponsored by the Water Education Foundation on March 16th, the day the Natural Resources Agency released a 10-Year Plan for habitat and dust suppression projects in the Salton Sea.  The tour was hosted by Assemblyman Eduardo Garcia, State Senator Ben Hueso and Resources Secretary John Laird.  After assembling at the Imperial County Airport, the entourage went to two venues.

Why Field Visits are Always a Good Idea

What happened?  Why did the Salton Sea elevation fall precipitously since 2004?  Strolling over the exposed playa, I spoke with many knowledgeable people involved in the Salton Sea and the creation of the Quantification Settlement Agreement (“QSA”) in 2003 (in which Hydrowonk represented the Imperial Irrigation District).  Everyone lacked an explanation.

The conundrum is compounded by the presumption that water conservation undertaken under the Imperial Irrigation District–San Diego County Water Authority agreement was designed to fully mitigate the impact of water conservation on the Salton Sea for the first 15 years (through 2017).  That is, through 2017, the mitigation plan for the transfer was designed to maintain inflows into the Salton Sea.  How?

This was the formula used to calculate IID’s delivery obligation for mitigation water found in Exhibit B of the Colorado River Water Delivery Agreement entered into by the Department of the Interior, Coachella Valley Water District, Imperial Irrigation District, Metropolitan Water District of Southern California and the San Diego County Water Authority.  Hydrowonk knows this for a fact.  I ran the spreadsheet.

So what gives?  Let’s look at data on the elevation of Salton  Sea—see chart from United States Geological Survey 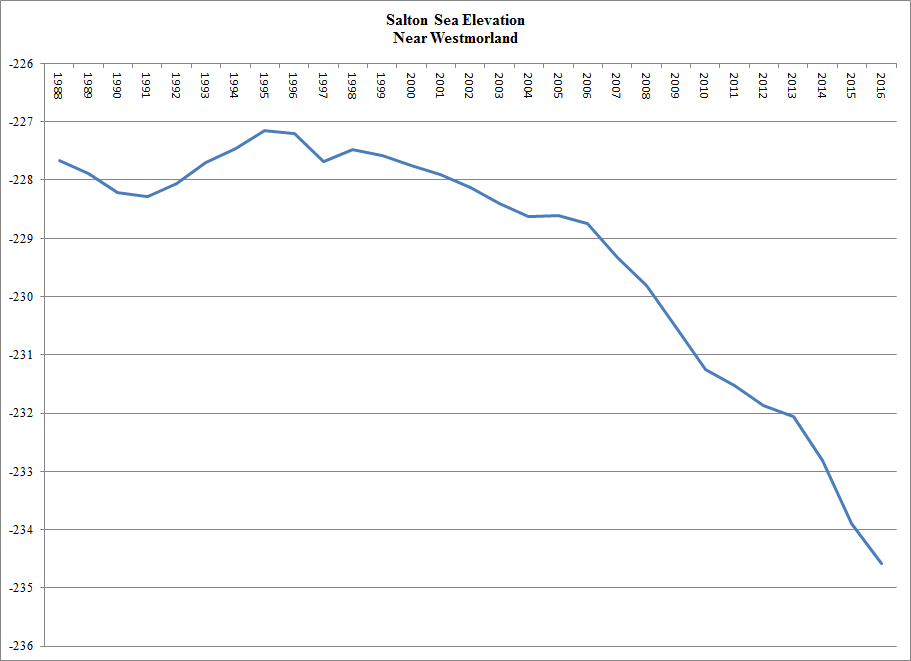 How can a successful restoration plan be developed and implemented unless we understand the nature of the problem?  Returning to my conversations during the playa tour, the “wisdom of the Salton Sea crowd” awaits development.  Are reduced inflows from Mexico part of the explanation?  Has conversion of lands in Imperial Valley from agriculture to solar significantly reduced inflows to the Salton Sea?  To what extent have reductions in agricultural water use below IID’s Priority 3 entitlement (adjusted for transfers) significantly reduced Salton Sea inflows?  Was the definition of the mitigation water obligation under the QSA or its implementation flawed?  Should have IID’s water conservation agreement with the Metropolitan Water District of Southern California included a mitigation obligation?  Are there other factors at work?

Understanding the causes of elevation trends is essential to discovering the Salton Sea’s future.  Once we have a scientific framework for understanding how the Salton Sea evolves, we will have better assessment tools for developing and monitoring the success or failure of habitat and dust suppression programs.  Unless we understand how to “bend the curve” on Salton Sea trends, our future will not be attractive.

Returning to the stroll on the playa one last time, I asked our guide about the source of the water for the habitat and dust suppression projects under the 10-year plan.  He responded that water will come from interception of inflows into the Salton Sea and use of water already in the Salton Sea.  Are we rearranging the chairs on the Titanic?  Will the ponds constructed under the 10-year plan further accelerate the decline in the Salton Sea’s elevation?  Will more playa be exposed and offset the playa covered by habitat ponds?

Any long-term management strategy, of course, must manage variability as well as address trends.  For the USGS historic record, the variability of the actual Salton Sea elevation around trend is about +/- 0.5 foot (see chart).  There are short-term runs of successive years above and below trends, but at least the dynamics in the historical data is not complicated (for Statwonks, the correlation of deviations between successive years is 0.54, the correlation of deviations two years apart is -0.19).  What is the significance of short term variability in the Salton Sea’s elevation?  How can or should it be managed? 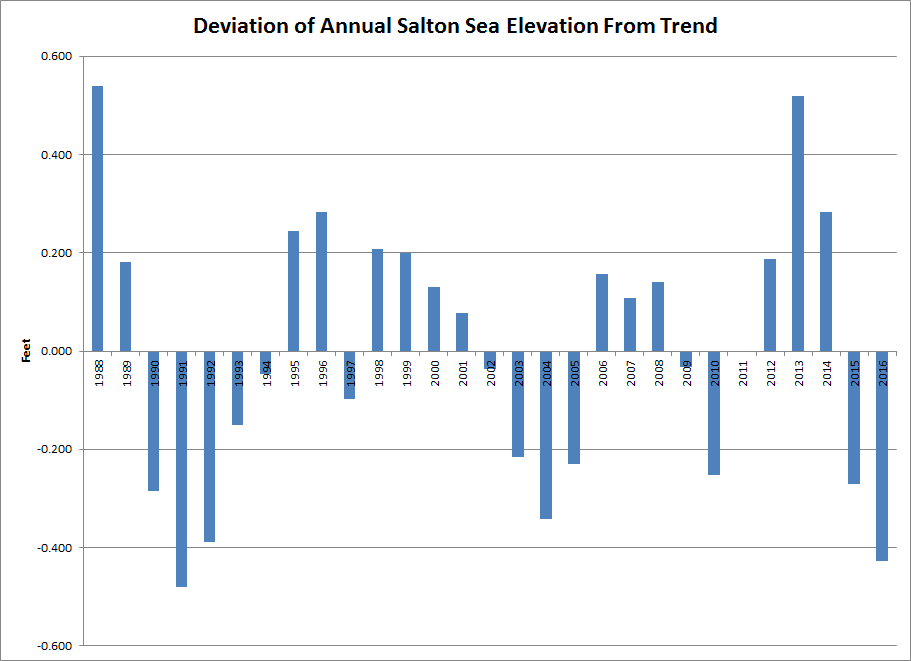 The second stop was to the 10th Annual Renewable Energy Economic Development Summit at the Imperial Palms Hotel & Resort in Holtville.  The tour’s hosts joined a panel including representatives of Imperial County (Ralph Cordova) and the Imperial Irrigation District (Kevin Kelley).

Secretary Laird noted that the current $80 million funding level covers the first five years of the plan.  This leaves a challenge to Governor Brown’s successor in the last year of the first term.  Senator Hueso expressed a strong commitment to the Salton Sea including that he has not given up on finding new water to increase and stabilize the Salton Sea’s elevation.  He believed that the private sector will have an important role in a long-term plan.  He intends to introduce legislation that puts the announced 10-year plan in statute and call for adoption of a long-term plan.  Assemblyman Garcia expressed strong support for addressing the Salton Sea and Senator Hueso’s agenda.  In Sacramento, Assemblyman Garcia and Senator Hueso are known as the “Salton Sea Boys”.

Observations about Next Steps

The facts on the ground are troubling.  The rapid decline in Salton Sea elevation started in the mid-1990s and accelerated after 2005.  Why?  Remarkably, no one knows.

Hydrowonk suggests that legislation codifying the 10-year plan announced on March 16th include a requirement that the Resources Secretary develop and use scientific tools to quantify the factors affecting Salton Sea elevation and water quality.  The tools should be developed through a formal “rule-making” process to accommodate third party comment and review.  The objectives would be to provide a science-based comprehensive quantitative assessment of (i) the forces affecting the Salton Sea and (ii) the impact of projects and programs.  The first objective identifies the forces that must be confronted and managed.  The second objective provides benchmarks for monitoring the actual performance of programs and programs undertaken to address the Salton Sea.

In closing, Hydrowonk is stunned by the facts on the ground.  The declining  trend in sea elevation is not obviously related to IID-San Diego transfers before 2018—the declining trend started in the mid-1990s (almost a decade before the transfer) but accelerated after 2005 even though IID delivered water into the Salton Sea to “fully mitigate” the impact of transfers.  Our understanding of the Salton Sea is flawed.  Should not public policy be based on a scientific understanding of the causes of our challenges and the consequences of our actions?  Would not this knowledge increase the prospect that the long-term restoration plan contemplated under Senator Hueso’s legislation will successfully address the public health and ecosystem challenges confronting the region?

Hydrowonk is returning to blogging after a long hiatus.  He has been busy working on developing opportunities for binational cooperation on water resource matters, which include drought relief in the Colorado River Basin and restoration of the Salton Sea.

1 thought on “Why Is the Salton Sea Over There?”