November 2012 was desalination month in California.  The San Diego County Water Authority approved a 30-year agreement with Poseidon Resources to buy up to 56,000 acre feet (AF) per year of desalinated seawater produced from the Carlsbad Desalination Plant.  With the annual price tag of water set at $2,041/AF to $2,295/AF (later reduced to $1,917/AF to $2,165/AF when San Diego secured project financing at unexpectedly favorable terms), there is buzz about what the deal says about the value of water.  As with any venture, the project also has critics about the cost of water, skeptics about risk allocation, and cynics about the role of a private party.

This post offers a Cautionary Tale to those wanting to “price their water rights” off this transaction and to those who bemoan a role for the private sector.  I believe that there were at least three factors at work: supply reliability, independence, and controllable counter-party risk.  The pricing reflects premiums paid for all three components.  San Diego has long-championed supply reliability and independence.  Controllable counter-party risk may have been another, unstated reason. 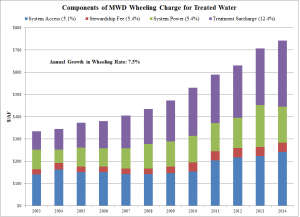 Counter party risks don’t dominate topics at water conferences.  Over the years, I have come to appreciate the importance of who are your counter parties and partners.  For San Diego, the promise of supply reliability and independence is a bet on plant performance and delivery performance.

Plant Performance.  Poseidon Resources has raised significant private capital based on its long-term agreement with San Diego.  Since San Diego “pays for performance”, the private capital transaction is based on the company earning returns from the contract.  Senior management is accountable to boards that are representing, directly or indirectly, capital sources.  As they say, “nothing like being responsible for hundreds of millions in investments to concentrate one’s mind.”  Rather than a detriment, the “singular focus” of the private sector on earning returns is beneficial.

Delivery Performance.  San Diego entered into ancillary agreements with local agencies to move desalinated water from the plant to a regional distribution system.  These agreements are within the San Diego family.  Is reliance on family members more comfortable than reliance on outsiders?

Pricing other water sources off desalination is tricky business.  The price, without adjustment, would be relevant only if the source meets the same reliability standards, location advantages (avoids Metropolitan wheeling costs and deliverability issues) and the same attractive counter-parties for transportation and exchanges.  If not, the premiums (whatever they were) would need downward adjustment in a valuation.

For those critical of the private sector, I apologize for heresy.  Yes, desalination faces construction, operational and regulatory risks.  (So do other water sources.) The Carlsbad lesson is that a public agency contracts with a private party and pays for performance and bearing risks.

A project should never be fully publicly financed.  Significant private capital must stand at risk behind performance obligations of the private party.  (This is why contracting operations to consultants without “skin in the game” is not recommended.)  Allocating risk to the private sector, of course, means paying commensurately higher returns.

San Diego’s venture into desalination provides an opportunity to think about desalination projects.  Don’t let any controversy distract you from the lessons.  San Diego has been on the cutting edge of water management and controversy since at least the mid-1990s when they pursued (successfully) a long-term water conservation and transfer agreement with the Imperial Irrigation District.  For an agency that facilitated change on the Colorado River, why should anyone be surprised they are pushing the envelope on desalination?

The San Diego decision was controversial at the board level.  Not all member agencies saw the project as beneficial.  My next post on Wednesday, January 9th will outline a decision-making procedure for how a regional water authority with member agencies can go ahead with new projects that respects the assessments of each member agency.