There are two ways to think about interest rates for project evaluation: (i) policy, or (ii) financing:

The Importance of Interest Rates

Consider a stylized example.  Suppose a $1 billion capital project has four years of project development costing $250 million each year.   Post-project completion, the project generates anticipated annual benefits of $30 million for 50 years.  Does 50 years of annual benefits of $30 million ($1.5 billion) justify a $1 billion investment?  Not necessarily.  We need to account for the timing of costs and benefits.  The interest rate measures the time value of money.  The question is how does the value of the schedule of costs incurred during project development compare to the value of the schedule of annual benefits enjoyed post-project completion? 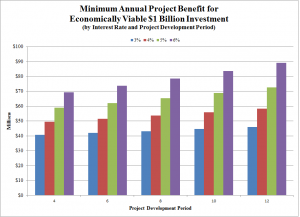 At the time of project evaluation, the choice of interest rate involves judgment calls.  There are two aspects: (i) market reception and (ii) future versus current market conditions:

A conceptual framework is useful to guide discussion.  See framework below for one commonly used in economics and finance.  The interest rate for a project equals the return on a benchmark security plus a risk premium.  A common benchmark is a “risk-free” security such as yield on 10-Year U.S. Treasury Notes.  The “Risk Premium” is the extra return needed to finance the project given financial risks borne by capital providers.

For an assessment of current market conditions, the yield on 10-Year Treasury Notes is a “look-up” exercise.

Especially when thinking about future market conditions, it is useful to breakdown the yield on 10-Year Treasury Notes into two components: real interest rate (return adjusted for inflation) and expected inflation.

Since 2003, the U.S. government has issued Treasury Inflation Protected Securities (“TIPS”) that adjusts principal payments by inflation.  Therefore, the yield on TIPS provides a market estimate of the real interest rate.  Using the above equation, one can infer a market estimate of expected inflation by comparing yields on 10-Year Treasury Notes with TIPS yields. 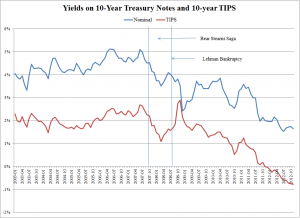 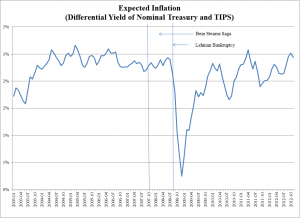 An interest rate based on today’s market conditions is probably too low for evaluations of long-term projects.  Based on the above data, I conclude that today’s treasury yields below 2% reflect historically low, and in fact, currently negative real rates.  With expected inflation returning to pre-financial crisis levels, using an interest rate reflecting today’s conditions is a bet that real interest rates will be negative long-term.  In my opinion, this is not a good bet.

We at RAND were struck by the fact that, during financial crises, the “flight to safety” by foreign buying of US treasury notes and bonds meant that the market was “buying safety in America” by accepting negative real rates.  Later in the 1970s when that financial crisis was in the rear view mirror, real interest rates rebounded to their long-term historical levels of 2% to 3%.

What does experiences from 40 years ago have to do with project evaluation today?  The interest rate used for evaluation of a long-term project should use an interest rate of 4.5% plus a risk premium.  The real rate will return to historical levels long-term.  When?  (If I knew I would trade interest rate futures.)  Using the experience of the 1970s as a guide, negative real rates will last at most only a few years.  An 2.5% expected inflation is consistent with (i) yield differentials between nominal 10-year Treasury Notes and TIPS and (ii) long-term inflation in the United States since the 1980s.

What about the risk premium? See my next post in this series on January 18th.