My earlier post on Prediction Markets discussed why prediction markets for the water industry.  They are the next frontier in water markets—information markets to improve planning and decision-making in the face of uncertainty about legislative and regulatory actions, political change, hydrology, project operations, litigation outcomes and water prices.  Currently, discussions of the future are often little more than unsubstantiated opinion.  The water industry can do better.

Prediction markets involve the trading of a contract tied to future outcomes.  The market price is an estimate of the probability of the future outcome occurring.  Prediction markets have predicted elections and policy outcomes in the public sector and sales forecasting, project completion dates, R&D success and other commercial questions in the private sector.

The University of Iowa has run prediction markets on Presidential elections since 1988.  Academic studies have shown that the pricing from the Iowa Electronic Market is a superior predictor of election outcomes than polling.  A review of how prices changed in the 2012 presidential election market illustrates how prices are informative about questions generally debated by dueling pundits during the election.

The prices set for these contracts during the campaign provided real-time estimates of the probability that the candidate named in the contract would receive the most votes in the 2012 election.  Since the pricing in these markets changed over time, they give information on how the probability of success for a candidate varied over time.

What was the impact of the first presidential debate on expected outcome of the 2012 Presidential election?  Did the price of the Obama contract increase or decline?

Answer:  On the eve of the first Presidential Debate, the Obama contract sold at 77 cents and the Romney contract sold for 23 cents.  After the debate, the price of the Obama contract steadily declined to 65 cents and the price of a Romney contract steadily increased to 35 cents by the eve of the Vice Presidential Debate.  The prediction market said that Romney significantly improved his chances of winning by his performance at the first Presidential debate.  Nonetheless, President Obama remained the front-runner.

Thereafter, the trends reversed so that by the eve of the election, the price of the Obama contract rebounded to 79 cents and the price of the Romney contract plummeted to 22 cents.  By Election Day, a Romney victory at a 22% probability was not likely.

Why Do Prediction Markets Work?

Prediction markets have gone Hollywood.  The investment banking and bond-trading firm Canter Fitzgerald has operated the Hollywood Stock Exchange (www.hsx.com) since 1996.  Trading is open to the public who receive $2 million of Hollywood Dollars (fantasy currency).  Markets estimate the gross proceeds of new releases, likelihood of new projects reaching commercial production, and many other issues related to entertainment management.  Studios use pricing on the exchange as input into business decisions.  Further, Canter Fitzgerald sells proprietary analysis of trading patterns to financial firms and studios, which combine the pricing information and analysis with other sources to decide which films to invest in, which to release, how much promotion money to invest in a new release, and which scripts to look at in the future.

How does one assess the accuracy of prediction markets?  For example, suppose that a prediction market’s price settles at 60 cents before the resolution of the outcome (for example, the contract paying $1 if a bill becomes law trades at 60 cents the day before the Governor signs or vetoes the law).  With an estimated probability of 60% becoming law, it is more likely than not that the bill becomes law.  Does the governor signing the law confirm the prediction?  Alternatively, does a gubernatorial veto invalidate the prediction?  The answer is not necessarily.  The validity of prediction markets cannot be determined by looking at one prediction.  We need to look at the accuracy of markets over a larger number of circumstances.

In his book Oracles: How Prediction Markets Turn Employees into Visionaries, Donald N. Thompson discusses the predictive accuracy of prediction markets run by Inkling Markets, a Chicago-based company that has operated more than 7,000 prediction markets for companies and governments worldwide.  As shown in the figure below, the closing prices predict the frequency of the traded events actually occurring.  For example, when closing prices are 20 cents, 30 cents, 40 cents and so on, the frequency of the events occurring is 20 percent, 30 percent, 40 percent and so on.  This prediction record confirms the power of prediction markets. 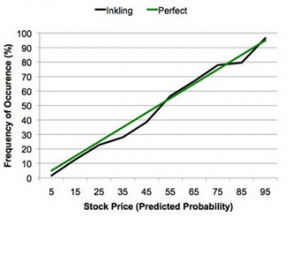 The Future:  Why Not the Water Industry?

As discussed in my earlier post in this series, these structures can accommodate the variety of questions about the future challenging planning and decision-making in the water industry.  The technical capabilities are immense.  The tools have almost unlimited application.