Talk about an interesting unintended consequence of the drought – in Wildhorse and Willow Creek Reservoirs in Elko County, Nevada, the Department of Wildlife has lifted all fish catch limits. The Department of Wildlife is concerned that as the water levels in these reservoirs fall, oxygen levels will decrease further causing a massive fish kill during the summer. This summer will be the second year in a row that Nevada lifted fishing limits due to drought, and the drought in Nevada is in its third year. Nevada relies on rainfall to support everything from tourism and construction in Las Vegas to agriculture in the more rural areas of the state. However, for the last three years, Mother Nature has been uncooperative. In this piece, I will review some of the challenges that Nevada faces as well as the steps the state can take to address the long-term challenge of water shortage.

Nevada faces a very similar situation to California regarding drought conditions. The same weather patterns that have brought drought to California have brought similar conditions to its neighbor to the East. Nevada relies on two mountain ranges for the vast majority of its water. To the West, the Sierra Nevada provides snowfall runoff. To the East, the Rocky Mountains provide water to the Colorado River. All states along the Colorado lay some claim to the River’s bounty. However, as I discussed in a Post last month, the Colorado River has experienced lower than normal inflows over the last few years, and more demands from the states on its water resources. The Sierra Nevada range experienced one of the lightest snowfalls in recent history last winter, as the photographs below show in stark detail. These two factors paint a dire picture for Nevada’s short-term water supplies. 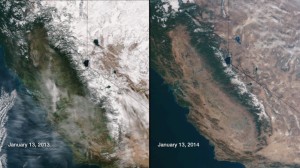 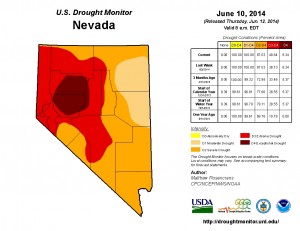 When we first think of Nevada, Las Vegas almost always comes to mind. The increased population and tourism in the city has put increased strains on the water supplies from the Colorado River. A June 5th article in The Slate points out that the water level in Lake Mead has never been lower since the Hoover Dam was constructed in the 1930s. This presents a major problem because Lake Mead supplies 90% of the water to Las Vegas. The drought is also hurting the agriculture industry. While the spat between rancher Cliven Bundy and the US Bureau of Land Management has gotten most of the national headlines, the cattle and ranching industry in the state faces some serious challenges due to the drought.

Many ranchers in the state lease rights from the Bureau of Land Management (BLM) to graze cattle. However, the BLM this year is limiting the amount of grazing land on Federal properties because the drought has taken such a toll on the plants for forage. While tourism and construction in the city centers such as Las Vegas may take center stage in our minds, we cannot forget how important the agricultural industry is to the State of Nevada. The Nevada Department of Agriculture estimates that the industry generates $3.3 billion a year in economic value to the state economy. The state’s economic vitality is intrinsically linked to the reliable supply of water to the areas in the state that need it most.

So what can be done? I believe that there are a few things that we all can try to address. When we look at droughts in any area of the US (and the globe for that matter), we have to determine what the best uses of water are for the limited resources that we have. Then we have to examine if we are using these limited resources most effectively. In a few instances, I believe that Nevada and other states in the Western US are not using water most efficiently. I worked in real estate development prior to going back to school, and I was surprised when I learned that on average, 65-70% of the water used in residential homes goes towards landscaping. The Nevada Division of Water Resources estimates that 70% of the water that Las Vegas residences use also goes towards irrigation. While some areas of Las Vegas and the hotels in the city use recycled water for irrigation, some citizens are averse to its use. Slogans like “toilet to tap” have scared people into believing that using recycled water is entirely unsafe and unsanitary. But when we really think about it, does it make sense to spend all of that energy and money to purify water to human consumption standards only to pour it out on lawns and shrubs?

So while I can understand the controversy for the alternative, I do not believe that using this high of a percentage of potable water for landscaping is the best use of this water. Also, since the creation of planet earth, we have the same amount of water molecules. So by nature water gets recycled. Further, we need to determine what the best uses of water are for agriculture and plan for prolonged droughts with more water storage and recycling. The harsh reality of drought is that our citizens, businesses and elected officials will have to make the tough choices about how to split up limited water resources. We can’t do anything right now to make more rain fall from the sky, so we have to make do with the water resources we have in the most efficient manner. However, we do have control over our future. Our future should do more to plan for prolonged droughts and find the most efficient and effective uses for the limited water resources that we have.