Over the last few weeks, the Journal of Water has posted a few very interesting articles about the challenges to California’s water rights. In particular, local irrigation districts in Central California and the State Water Resources Control Board have gotten into arguments over whether the most senior water rights can be curtailed in a time of drought. According to a Modesto Bee article, the State Water Resources Control Board (SWRCB) may this month curtail more junior water rights from drawing water. The SWRCB argues that they need to take this measure in the midst of unprecedented drought to protect the most senior water rights holders. The irrigation districts and the water rights holders are concerned that this move will lead to water rights curtailments of even the most senior rights in the state. At this point in California, there is clearly not enough water to satisfy all of the claims to water in the state. Until Mother Nature provides us with more rain, we have to determine who should receive water, and how much. In this piece, I will address the issue of water rights law in the state and how this may play out if the severe drought continues.

But first a bit of background. California’s water rights laws are mind-bogglingly complex, but they generally follow the prior appropriation doctrine. The prior appropriation doctrine follows a “first in time, first in right” rule. That is, the first person or organization to lay claim to water from a particular river or stream establishes the first right or “senior” claim to this water. More parties can claim rights to the water source as long as there is further available water. However, these later claims become “junior” claimants and are in line behind the most senior rights holders. All parties that have water rights to a particular water source will receive their allocation as long as there is enough water in the river or stream to support all of the claims.

When there is not enough water to satisfy everyone’s needs, some rights holders must go without some of their entitlement (or all in the instance of extreme drought like we are facing now). But again, not all water rights in California are created equal. The year 1914 is a key year in the Golden State that demarcates the seniority of water rights. (Please see the California Water Resources Control Board  page for a more detailed discussion of the history of water rights in the state) Until 1914, water appropriators did not have to file formal paperwork or receive permits to remove water from rivers and streams. The increased need for water as the state grew caused disputes between claimants to the state’s surface water. The Water Commission Act of 1914 established a permitting process that would formalize how water users would be able to divert water from rivers and streams. However, the Act did not erase the water rights in place prior to the legislation’s passage. As such, these “pre-1914” water rights are the most senior water rights in the state. However, regardless of how “senior” particular water rights may be,  the amount of water that Mother Nature provides the state still dictates what claimants can draw from surface water sources.

California unfortunately faces this exact situation as it battles through the fourth year of drought in the state. As Rod Smith wrote in a recent Post, the California Department of Water Resources (DWR) only increased its allocation to the State Water Project to 5% after some significant rainfalls in the spring. Further, DWR will only deliver this water in the fall after the peak water use season. Until then, our state will have to rely on the water storage and supplies we currently have in place. Also, the prior appropriation doctrine will determine who will get water and who will not. And therein lies the rub.

As the realization sets in that the fourth year of drought has depleted water supplies, we must face the fact that not all water rights holders will be able to receive water this year. The only questions are who will get some water, and how much? This uncertainty causes concern among the farmers, water districts and businesses that require adequate and reliable water supplies. The discussion of water curtailments has even the most senior water rights holders in the state concerned over what policymakers will do next. Some of the oldest and therefore most “senior” water rights date back more than a century. In comparison, the State Water Project holds relatively “junior” water claims because the state began the Project in 1960. As you can see in the graph below, the State Water Project since the early 1990s has a history of rapid changes in allocations from year to year. However, the state’s most senior water rights holders are concerned that the SWRCB’s recent actions could also curtail their rights. 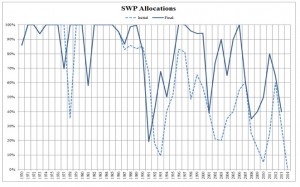 At issue is whether the most senior water rights in the state should face the same curtailments as more junior water rights if there is not enough water to satisfy any of the claims. For example, the same Modesto Bee article I cited in the opening paragraph points out that the Oakdale and South San Joaquin Irrigation Districts oppose the SWRCB’s actions to curtail water diversions because these districts believe curtailments do not pertain to their particular water rights. These districts have some of the oldest water rights in the state, established more than a century ago, and the management argues that the curtailments do not apply to them. “We don’t think the state’s authority extends to our pre-1914 water rights,” said Steve Knell, Oakdale Irrigation District general manager. “We fully expect to take them on should they decide to go down that path.” Jeff Shields, General Manager at the South San Joaquin Irrigation District expressed similar concerns. “We will do whatever we have to do to protect our legacy water rights,” said Shields.

So what is the state to do in this case? While I am not a water rights attorney, our state’s laws have determined a hierarchy for the seniority of water rights that has been in place for over a century. During times of bountiful rains, the state can provide water to most if not all of the claimants to water sources. But we do not have the luxury right now of bountiful water. Just take one glance at the zero percent allocation for the State Water Project earlier this year, and you will see just how dire the water situation has gotten in California. It is an unfortunate consequence of drought that there will not be enough water to serve all claimants. We can certainly have a debate over whether these laws most fairly allocate scarce water resources. But whether we agree with the philosophy of the laws or not, California has in place a way to determine who will get water through the system of rights seniority. The SWRCB held meetings on July 1st to expedite the enforcement of the curtailments the Board has put in place. It remains to be seen how actively the Board will pursue enforcement of this policy. Stay tuned for an update in a future blog piece on this topic.