Since the beginning of this year, water managers in states such as California have relied on both surface and groundwater storage to make it through the unprecedented drought. In many cases, these managers point to the large groundwater aquifers and surface water storage that some areas of the Western United States have to give us much needed water during the last few years. The proponents of using storage argue that during dry years, we can draw down our reserves from these sources to get us through even the prolonged drought we are now facing. However, some recent studies suggest that these practices may not be sustainable over the long term in the drier Western United States. In this piece, I will review the most recent research on groundwater depletion in the Western United States. In a follow-up piece next week, I will look at the latest legislation moving through California and Texas to address the groundwater depletion issues.

The Western United States remains mired in exceptional drought and little rain has fallen across the region to help alleviate the situation. The US Drought Monitor’s weekly update shows that California has fallen further into exceptional drought. This week, over 58% of California is in a severe drought, a 22% increase over the prior reading. Areas of Nevada, Texas, Colorado, Oklahoma and Kansas also face severe drought. Water is the lifeblood for all communities in these drought-stricken areas, and cutting back on water consumption quickly is easier said than done. Many farms and businesses count on reliable long-term reliable water supplies for their livelihood. Further, while states such as California have implemented mandatory Water Usage Reductions, the fact of the matter is that changing people’s water usage habits takes time. 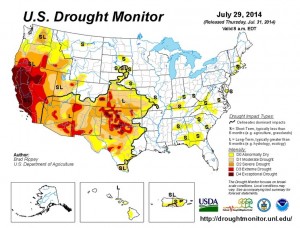 In response to the unprecedented drought the Western United States is facing, more and more areas have drawn down both surface water and groundwater supplies. The idea is that we will draw down our water inventories during the drought to continue to provide service to citizens and businesses. When (maybe now it is if?) it rains again, we can rebuild our storage supplies by filling these aquifers and surface storage facilities back up. The idea in theory has kept us from so far having to make even more painful water cuts during the drought. However, the rate of groundwater depletion and the side effects it may cause is alarming and a cause for concern going forward.

We have all seen pictures in the news media of boat docks on dry land and cars that have been submerged in lakes for years that are now high and dry. The two images below, however, were the images that initially showed me the severity of the drought we are facing in 2014. The images are of Lake Oroville, one of the largest and most important reservoirs in California. The pictures are taken in identical locations. The first picture was taken in January, 2013. The second picture was taken in January, 2014. The rate of water loss in one of California’s most important reservoirs is astounding. And Lake Oroville is not alone. Lake Mead is at the lowest elevation since the Hoover Dam was built. 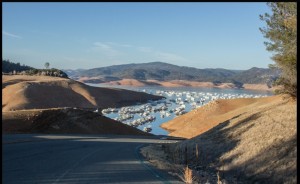 The pictures above are of reservoirs that we can see the changes in easily. However, a more alarming and less visible change is happening below the surface to our groundwater supplies. A new study that NASA and UC Irvine commissioned shows that groundwater in the Western United States is falling at a similar pace to our surface water supplies. The figures the study cites are alarming. In the last 10 years, the Colorado River Basin has lost 15.6 cubic miles of groundwater. This amount of water equates to 53 million acre feet of water, almost twice the amount of water Lake Mead can hold at full capacity! According to the study, 75% of that loss came from excessive groundwater pumping. The US Bureau of Reclamation points out that the weather in the Colorado River Basin since the turn of the century has been the driest in the last 100 years. But even the authors of the study were shocked at the amount of groundwater depleted in just 10 short years. “We don’t know exactly how much groundwater we have left, so we don’t know when we’re going to run out,” said Stephanie Castle, a water resources specialist at UCI and the study’s lead author. “This is a lot of water to lose. We thought that the picture could be pretty bad, but this was shocking.”

The study paints a pretty dire picture for groundwater in the Western United States. While we all hope for rain this winter, some experts argue that even above-average rainfall will not reverse all the damage that the drought has caused. Some of the damage such as land subsidence may be permanent. In California, some areas of the Central Valley are witnessing further land subsidence as farmers desperately pump groundwater to make up for the lack of surface water supplies. Land subsidence occurs when wells pump water out of underground aquifers and the land sinks when the soil compacts. According to the US Geological Survey, some areas of the San Joaquin Valley could subside by as much as a foot this year. Land subsidence could cause some permanent damages. First, aquifers in areas with land subsidence may not recharge even if significant rain falls in the area. Second, the hydrologic conditions both above and below ground may change permanently. Rivers and canals above ground may not flow properly as a result of the land subsidence. These negative changes may be permanent if the subsidence is severe enough.

Right now, farmers in California face a tough situation. They have no access to surface water since the State Water Project is delivering no water and surface water rights have been curtailed. Farmers must use groundwater to keep their crops and businesses alive. However, the use of groundwater to make up for the lack of surface water supplies is not on a sustainable trajectory. Further, the issues with groundwater depletion and subsidence may become permanent if enough pumping occurs to outlast the drought. In my piece next week, I will look at the latest legislation to address the groundwater challenges and whether these new measures will provide an adequate solution to the problem.