In the drought-parched Western United States, it is hard to find a silver lining in the economic and social costs that the long-term drought has caused. But at Lake Mead on the Colorado River, people are trying to make the most of the limited water supplies and take advantage of the unique sights that the low water levels have revealed. In late July, CBS News reported that the exceptionally low lake levels have revealed interesting historical attractions that up until the drought, were essentially unreachable. The receding shoreline revealed the foundations of Saint Thomas, a pioneer town that Mormon settlers founded in 1865. Until the US government purchased the land in the 1930s, the town was inhabited and included a school, homes, a general store and ice cream parlor. In the 1990s, 100 feet or so of water would have covered the ruins of Saint Thomas. Now, visitors can hike for about a mile across the desert to reach the foundations of the former town.

Other than this small interesting historical consolation, there is little to cheer about the overall water situation in Nevada. According to the most recent US Drought Monitor, Nevada and neighboring California are the only two states in the nation currently experiencing exceptional drought conditions. In Nevada, 100% of the landmass currently is in some form of drought, and exceptional drought covers 15.93% of the state. Further, the elevation at Lake Mead remains at some of the lowest levels on record since the Lake was filled in the 1930s. In July, the US Bureau of Reclamation reported that the elevation at Lake Mead was 1,078.15 feet, deepening concerns about the possibility of a shortage in the near future. (A shortage would be declared and water restrictions imposed if the Bureau of Reclamation forecasts in August that Lake Mead’s elevation the following January will be at or below 1,075 feet above mean sea level.)

But if you think that the potentially dire water situation has slowed down tourism and development in Las Vegas, think again. For example, a new hotel called The Resorts World Las Vegas is scheduled to break ground next year. It will feature approximately 3,000 rooms and one of the largest casino floors on the Strip. Clark County has a current population of about 2.1 million people, and that number is expected to grow to approximately 2.7 million by 2035. So where is the water supply going to come from to accommodate this new population and development? And is it sustainable? I will answer these questions in this post. 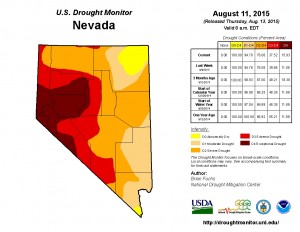 The Colorado River entitlement is split up between seven states and the country of Mexico. As you can see in the chart below, Nevada has the lowest entitlement from the Colorado River of any state – just 300,000 acre-feet, 550,000 acre-feet lower than the 2nd lowest state entitlement of New Mexico at 850,000 acre feet. California’s 4.4 million acre-feet of entitlement dwarfs Nevada’s figures. How did Nevada get such a small entitlement? The Southern Nevada Water Authority explains that when the Colorado River Compact was signed, Nevada’s population and priorities looked much different. At the time of the signing of the Compact in 1922, Nevada’s population was approximately 80,000. In comparison, California’s population was approximately 4 million in 1922. Instead of securing increased water supplies for a sparsely-populated state, Nevada focused on hydro-electric generation, ultimately securing one-third of the power generated from the Hoover Dam which was completed in 1936. 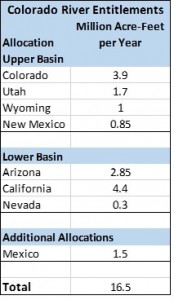 While electricity supplies certainly are still important to the bright lights of the Las Vegas strip, (For example, estimates for the electricity bill for the light beam on the top of the Luxor pyramid alone top $1 million dollars a year) water supplies are also very important to the continued population growth and economic development of the State. Nevada looks to recycled water and other conservation measures to provide adequate water supplies for the growing state.

We have written a series of posts at Hydrowonk on the general sustainability issues surrounding the Colorado River watershed. Nevada has limited supplies from the Colorado River, and according to the Las Vegas Valley Water District, approximately 90% of Clark County’s water comes from the Colorado River. So how can water officials and Las Vegas citizens maintain sustainability during these trying times for the Colorado River watershed? First, water conservation is a key component of Las Vegas’s long-term water sustainability plans. In 1996, the Southern Nevada Water Authority (SNWA) established a Water Resource Plan which set initial water conservation goals for the Las Vegas area. In 2009, SNWA updated the plan and adopted a new conservation goal to reduce per capita water use to 199 gallons per day by 2035. Las Vegas has made strides to reach this goal. The Las Vegas Valley Water District reports that from 2003 to 2013, Nevada has reduced its per capita water use from 314 gallons per capita per day to 205, a 34.7% decrease in water usage.

The Las Vegas area has also increased its use of recycled water. According to the Southern Nevada Regional Water Recycling Study, approximately 40% of the Las Vegas area water supply comes from recycled water sources. The figure dwarfs the percentage of recycled water used in Los Angeles, which currently stands at about 1% and may rise to 8% of total supply by 2035. Las Vegas uses recycled water in two ways. First, the water districts there provide recycled water directly to end users to water golf courses, landscaping and to recharge fountains. Las Vegas also increases its water supply from Lake Mead through the use of “Return Flow Credits.” When Las Vegas treats its wastewater, the water it does not use directly discharges into the Las Vegas Wash. The Las Vegas Wash then flows into Lake Mead, thus recharging the Lakes’ supplies. For every gallon that Las Vegas returns to Lake Mead, it is allowed to extract a gallon above and beyond its entitlement from the Colorado River.

The Sustainability of the Colorado River Water Supply

The Las Vegas area is taking steps in the right direction to ensure a reliable water supply for the businesses, citizens and visitors. Both the conservation measures that I outlined as well as the increased focus on recycled water may provide Las Vegas with a reliable portion of its water supply for the future. Also, in relative comparison to California’s water supplies from the State or Central Valley Projects, water from the Colorado River has been more “reliable.” An article this week from the Riverside Press Enterprise concluded that steady water supplies from the Colorado River have caused less land fallowing in farms in Southeast California than farms in the Central Valley that rely on water resources from Northern California.

However, Las Vegas cannot rest on its laurels. It still receives 90% of its water supply form Lake Mead, so the health of the Colorado River Watershed is crucial to the viability of Las Vegas. Lake Mead currently stands at 38% capacity, and Lake Powell is at 53% of capacity. These figures should be cause for concern for all parties that rely on these lakes for their water supplies. So while Nevada has implemented good programs to create water supplies through conservation and recycling, it must continue to monitor the long-term health and viability of the Colorado River upon which it relies so heavily.