California and Florida may be on opposite coasts, but they have more similarities than you may expect in relation to water supply challenges. While California and much of the Western Unites States remains in the grip of a long-term drought, the Southeastern United States has quietly and unfortunately also entered into drought. Southern states including Florida, South Carolina, Alabama and Louisiana are experiencing drought conditions, in some cases severe. The most recent US Drought Monitor shows that while drought conditions in the Sunshine State have abated somewhat, approximately 27.1% of Florida is experiencing some level of drought. The drought conditions are at their worst near the population centers of Tallahassee in the north and Miami in the south. Just a month ago, close to 40% of the state was in some form of drought and extreme drought covered parts of Southeastern Florida west of Miami.

As in California, Florida faces pressures on its limited water resources including water needed for population growth, agriculture and the environment. Both states also face similar challenges as saltwater intrusion affects coastal water supplies. In this post, I will address the similarities between Florida’s and California’s water supply challenges, the problems that saltwater intrusion can cause with coastal water supplies, and what each state is doing to address the situation. 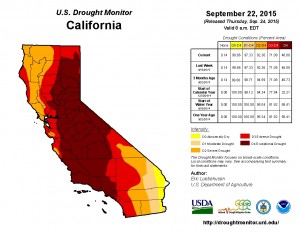 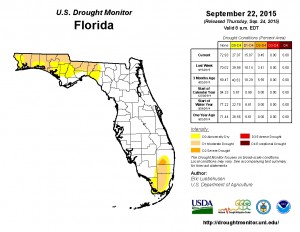 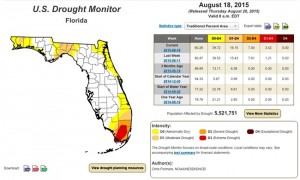 Similarities between the Drought Conditions in Florida and California

While California and Florida are on opposite ends of the United States, the two states have many similarities in relation to the water supply challenges they both must address. When conducting research for this post, a few common trends surfaced between the two states. First, both states face population pressures and the challenges of providing an adequate water supply to this new population base. The Florida Office of Economic and Demographic Research estimates that Florida’s population will increase from 18,801,310 residents to a projected 26,081,392 residents in 2040. The projected 2040 figure represents a 38.7% increase, and is a faster projected population growth rate than California. The California Department of Finance projects that California’s population will grow about 26.5% over the same period.

Further, like California, agriculture remains an important economic driver to Florida’s economy. According to the Florida Department of Agriculture and Consumer Services, Florida’s annual crop receipts of about $1.93 billion rank the state 9th in the nation. Florida grows approximately two-thirds of the country’s citrus crop. However, Florida policymakers warn that without a unified and statewide conservation and reuse policy, agricultural operations will face an uncertain water future. At the Florida Water Forum last week, Agricultural Commissioner Adam Putnam said that without a change in legislation and a unified conservation policy, the agricultural community may face a water shortfall of over 1 billion gallons (approximately 3,070 acre-feet) daily, or about 1.1 million acre-feet annually.

Both states face the effects of climate change and the environmental ramifications associated with agricultural operations. In California, some agricultural areas of the state face groundwater contamination problems from fertilizers and pesticides leaching into the water table. Last week, the Westlands Water District, one of the largest irrigation districts in the Central Valley agreed to a somewhat controversial settlement with the Department of the Interior to retire at least 20% of the lands within its district and clean up contaminated aquifers within its bounds. (The controversy is over what Westlands gets in return – reduced debt owed to the Central Valley Project. Opponents of the deal argue that the agreement will give Westlands greater access to Federal water from the CVP because the settlement grants Westlands an indefinite contract rather than one that has to be renewed every two years.) Florida also faces challenges associated with pollution from farming operations. In Southern Florida, regulations have forced sugarcane operators to reduce phosphorous runoff from fertilizers into the Florida Everglades National Park, but environmental groups there say the industry has not gone far enough. Farming groups argue that the 1994 Everglades Forever Act forced them to reduce phosphorous levels by at least 25% of levels before the law passed. Environmental groups however say that sugarcane ranches aren’t doing enough to reduce phosphorous levels, particularly during the drought. A Miami Herald article points out that while farmers have reduced phosphorous runoff, the reduced amount of water draining into the Everglades as a result of the drought has actually increased salinity in the National Park.

Farm runoff isn’t the only challenge facing both California and Florida during the drought. Saltwater intrusion into coastal wells remains a key challenge in both states as cities, agriculture and businesses use limited water supplies.

In California, the Pajaro Valley between Monterey and Santa Cruz on California’s Central Coast, saltwater intrusion threatens some of the most lucrative farming areas in the state. Mostly disconnected from the State Water Project, this area of the state relies on groundwater for almost 80% of its water supply. The region’s aquifers have been dropping steadily over the last few years, and as such California Department of Water Resources designated this basin as one in critical overdraft. The steady decline in the water table has allowed saltwater to flow in some parts of Monterey County as much as 6 miles inland!

Florida is facing many of these same challenges. A US Geological Survey report concluded that the population centers in Southeastern Florida in combination with their reliance on groundwater from aquifers close to the coast have exacerbated the challenges associated with saltwater intrusion. However, both states are using innovative solutions to address the real problem of saltwater intrusion.

What is being done to address the situation?

When I was conducting research for this article, it struck me that the challenges both Florida and California face with saltwater intrusion are not new. The Monterey County Water Resources Agency has documents from the 1940s  warning that excessive groundwater pumping may be causing saltwater intrusion. In areas around Miami, wells operational since as early as the 1920s have just been recently shut down due to saltwater intrusion concerns. But operations in both states are using innovative ways to keep saltwater intrusion at bay.

In the Sunshine State, the South Florida Water Management District has approved about $1.4 billion for 488 projects since 1997 to fight back against saltwater intrusion along the coast. The grants have paid to move well fields further west and away from the coast, build reverse osmosis plants to take advantage of brackish water supplies further inland and water storage projects to capture stormwater for later use. In California, areas across the state are looking to recycled water for supplies to keep saltwater at bay. In the Pajaro Valley, the Pajaro Valley Water Management Agency built a 20-mile long recycled water pipeline from Watsonville to the agricultural areas of the valley. The agency injects the recycled water back into the aquifer for growers to use and to act as a barrier between the aquifer and the seawater. Officials in Soquel Creek have also moved two wells further inland to reduce the reliance of groundwater pumping near the ocean.

These measures have helped Florida and California to reduce the impacts of saltwater intrusion inland. But there still is work to be done, and the stakes are high. While treatment options and moving wells are expensive, losing agricultural land and water supplies for cities is not an option. Gary Peterson, Director of Public Works for the City of Salinas, California said, “People pay into the system because they recognize that stopping seawater intrusion is the most important thing for us or we lose the valley. That means we can’t grow anything here.” Cities and water districts in both states will continue to implement these strategies as we try to find a balance between needed water supplies and Mother Nature.