While many areas of the United States are recovering from drought conditions, there is one area which is headed deeper into extreme drought: the Northern Plains. While a series of storms in May and June caused widespread flooding and damage in Oklahoma, these storms largely missed the Dakotas and Montana. According to the most recent US Drought Monitor as of August, Montana and North Dakota were the only states in the US that had any exceptional drought. Currently, 99.59% of the Roughrider State is in some form of drought, and 43.84% of the state faces either extreme or exceptional drought. At the beginning of the calendar year, only 6.13% of the state had some form of drought, and there was no drought more severe than “abnormally dry,” the least severe drought designation. 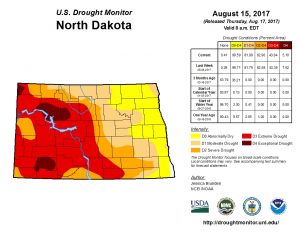 The drought in the state has become so severe that Governor Doug Burgum issued a drought emergency declaration on June 22nd and made emergency grants for livestock water available through the Drought Disaster Livestock Water Assistance Program. Also, after months of negotiations between North Dakota Senator Heidi Heitkamp and the US Department of Agriculture, the Department agreed to open up federal grazing acreage under the Conservation Reserve Program for cattle herds that the drought has affected.

Clearly the drought is affecting a variety of industries, and at present, there is not enough water supply to satisfy all water users. Further, a change in regulations will now allow the oil drilling industry to access water on the Little Missouri River (assuming that there is available supply) in which the industry had a moratorium in place on draws for the last few months. What has changed from a regulatory perspective that is allowing the drilling industry to access these waters? And will these new regulatory changes really open up new water supplies to the industry in practice? I will address both of these issues in this post.

North Dakota remains one of the most important states in terms of energy production. According to the US Energy Information Administration, North Dakota ranks number 2 in crude oil production, only behind Texas. It also ranks number 11 in natural gas production.  According to the US Bureau of Economic Analysis, the oil and gas industry contributed $5.9 billion to North Dakota’s economic output, or about 12.3% of the state’s total GDP. Despite a fall in oil and gas prices to the mid-$40s per barrel at the time of publishing this post, North Dakota’s unemployment rate remained at an astonishing 2% in May 2017. Despite the fall in oil prices, there are currently more active drilling rigs in the state than there were a year ago. According to the North Dakota Oil and Gas Division, there are currently 53 active drilling rigs in the state as of August 21st compared to 32 on the same date in 2016. It is a sharp drop from the 193 rigs active in 2014 and 185 rigs active in 2013 on the same date. Despite the drop in active drilling rigs in the state, clearly the oil and gas industry remains a key component of North Dakota’s economy.

The challenge for drillers in North Dakota is finding a reliable supply of water for operations. Robert Shaver with the ND Water Appropriations Division estimates that an average shale well takes approximately 2 million gallons of water to prepare for oil extraction, and the estimated oil field water demand in the state is 22,400 acre-feet. One of the largest aquifers in the oil producing part of the state is the Fox Hills aquifer, but it is a major source of water for livestock and well pressures have been on the decline since the 1980s. The state allows “fallow transfer” programs where a farmer can choose not to plant a certain crop, and in turn sell a pre-determined amount of water (that the farmer would have used for the crop) as an industrial permit to a drilling company. However, the extreme and exceptional drought that many farmers are currently facing leave very limited water supplies to transfer. In terms of surface water rights, the drilling industry looked to rivers such as the Little Missouri for extra water supplies. But regulatory hurdles caused challenges to executing that plan.

The Rules on the Little Missouri River Change

In the spring of 2017, a hydrologist reviewing permit applications came across the language of the law and notified the State Water Commission of this oversight. North Dakota also determined at that point that the Little Missouri River Commission, an oversight board that the law requires, had not met in more than a decade. Clearly the law had not been followed to the letter, and as such, Governor Burgum issued a moratorium on industrial permits beginning in May. The state reacted quickly to rectify the situation.

“Channelization, reservoir construction, or diversion other than for agricultural or, recreational, or temporary use purposes and the dredging of waters within the confines of the Little Missouri scenic river and all Little Missouri River tributary streams are expressly prohibited.”

– Continue with the moratorium Burgum set in May.

– Grant temporary water permits only for minor industrial uses, such as road construction and dust control.

– Allow industrial use of the Little Missouri from Sept. 15 through May 15, outside of the tourist and farm irrigation season.

– Allow industrial permits for the river year round.

In late June, the Commission voted 7-1 to allow year-round permits, and the moratorium was lifted.

Did Clarification of the Law Really Change Anything in Practice?

The change in law on paper can provide the legal groundwork for allowing drillers and other industrial users to tap the Missouri River for water resources. But practically, little water if any may be available to drilling companies at least in the short term. There are a few reasons for this. First, because of the drought, there may be very little excess water from this source. State Engineer Garland Erbele said, “It’s questionable whether there is even sufficient water supply left in the river to provide water for new permits.” North Dakota’s water rights also follow the doctrine of “first in, first right,” meaning that the earliest established water rights have seniority over newly applied-for rights. Drillers applying for new permits must wait for all prior water rights holders to receive their allotment before the newer water rights holders receive anything. Considering the drought conditions, this is unlikely. Finally, North Dakota has an established preference in granting permits when there is insufficient supply to satisfy all applicants. Industrial uses are given a low priority in this circumstance. Chapter 61-04 (Appropriation of Water) under North Dakota Code states:

61-04-06.1. Preference in granting permits. When there are competing applications for water from the same source, and the source is insufficient to supply all applicants, the state engineer shall adhere to the following order of priority:

Considering the current drought and the fact that Governor Burgum began accepting applications in late June for the North Dakota Drought Disaster Livestock Water Supply Project Assistance Program, it is unlikely that drillers will receive any appreciable water supplies from this source until drought conditions improve.

Longer term, North Dakota will have to grapple with the fact that, particularly in periods of drought, there will not be enough water resources to satisfy every water right holder and the environment. Further, changing politics and interests will continue to play into lawmakers’ decision making calculus. Jan Swenson, Executive Director of the Badlands Conservation Alliance alluded to the changing political dynamic when she said that the original authors of the Little Missouri State Scenic River Act would be “stunned” to see the recent amendment to the Act. She said, “The spirit of the act, to me, suggests that [the original authors] did not want to see the Little Missouri State Scenic River and the surrounding Badlands and prairie landscape become an industrial zone. It appears to me that North Dakota values, politically at least, have changed.” It remains to be seen how lawmakers will address these competing water interests in the long term.