The inevitable is upon us.  Channeling Hydrowonk’s favorite Chicagoan theologian, “the curtailments have come home to roost.”

Many are not surprised.  The early 20th century was a period of historically high natural flows on the Colorado River when the 1922 Colorado River Compact was negotiated.  The 1944 Treaty with the Republic of Mexico was, at least partly, a national security exercise during World War II against Nazi incursion south of our border.  Were interested parties inside and outside state and federal governments engaged in long-term comprehensive risk assessment over the past seventy years?  Based on Hydrowonk’s four decades plus experience, nope (with a few exceptions).  Neglect is always a prelude to catastrophe.

How did we get ourselves into this mess?  Hubris and failed risk management.

How do we dig ourselves out?  Improved risk management, maintaining the “Law of the River,” and creating water markets throughout the Colorado River Basin.  The alternative will be a future of increased water supply risks from protracted litigation and political conflict that will impede the transition to prudent long-term water supply management. 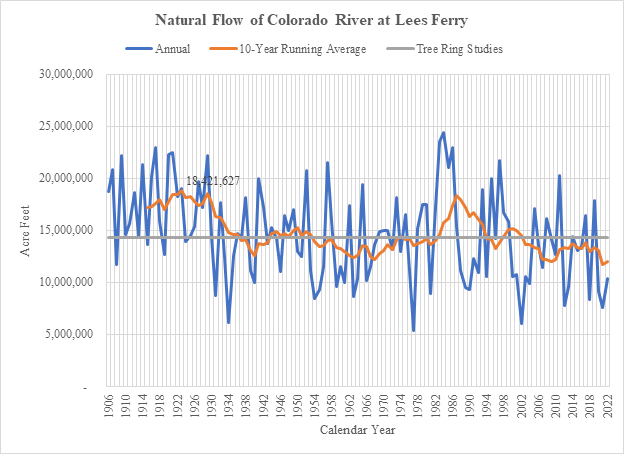 History confirms the view of the “Windshield Brigade.”  The magnitude and duration of any drought should be measured by how annual natural flow compares to 14.3 million acre-feet. Will the impact of climate change make the hydrologic circumstances in the future even more severe than today’s circumstances?

Our challenge today reflects the consequences of “deferred action” (a common malady of policymaking).  The historic floods of the 1980s proved to be a distraction from the needed acknowledgment that the Colorado River was over-appropriated.  The Rear View Mirror Brigade believed that the Colorado River was not over-appropriated.  The most notable proponent was the Metropolitan Water District of Southern California, who issued in the mid-1990’s its “Reliability Plus” Report (out of print) foreseeing an annual supply of 5.2 million acre-feet of Colorado River water available to California into the then indefinite future.  This perception may have found solace in the three high flow years in the mid-1990s.  Fooled by randomness. 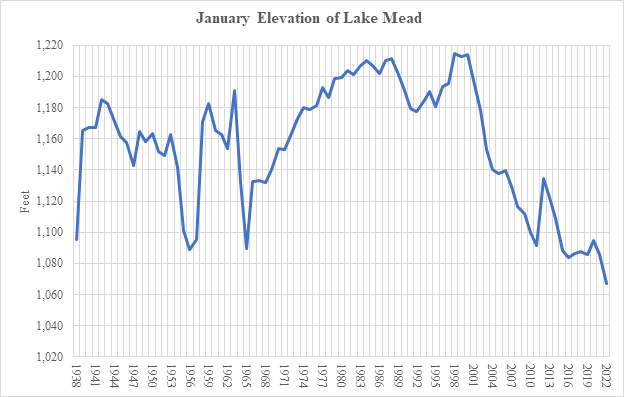 The federal government and the Upper and Lower Basin parties recognized that the era of ubiquitous Colorado River water may be coming to an end.  In 2007, the Bureau of Reclamation established criteria for the Secretary of the Interior to declare shortages in the Lower Colorado River basin based on the elevation of Lake Mead.  Reflecting the priority of Colorado River water rights in the Lower Basin, curtailments of water deliveries were mostly allocated to Arizona and secondarily to Nevada (see table).

Shortages were not triggered for many years.  Natural inflows above of 20 million acre-feet happened in 2011 (see first figure).  Starting in 2016, however, the elevation of Lake Mead hovered less than 10 feet above the 1,075-foot trigger for declaring a shortage.

For the first time in history, the Bureau of Reclamation declared a shortage for 2022 on the Colorado River as the expected elevation of Lake Mead fell below 1,075 feet but remained above 1,050 feet.

The risk of continued and even more severe water curtailments is imminent (see figure).  Over the next few years, there is an increasing risk of curtailments of Colorado River water, with California facing cutbacks ranging from 200,000 acre-feet per year to 350,000 acre-feet per year.  Under the priority system governing the allocation of California’s 4.4 million acre-feet Colorado River entitlement, these curtailments will be borne almost exclusively by the Metropolitan Water District (under a 2020 settlement of litigation with the Imperial Irrigation District, IID agreed to share 3% of Metropolitan’s curtailments up to a 50,000 acre-foot cumulative cap in exchange for storage in Lake Mead).  Comparing the Bureau of Reclamation’s February 2022 forecast to its May 2022 forecast, the dynamics on the Colorado River is increased risks of more severe and sustained water curtailments, with only a small prospect of normal water years by 2024 and thereafter. 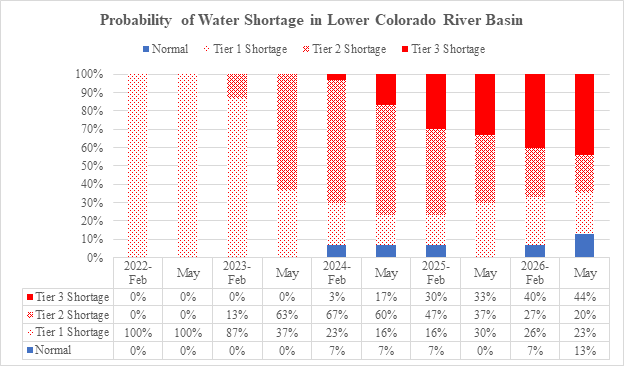 While the current circumstances seem like a drought, the risk of curtailments extend beyond a “temporary” drought cycle.  For at least more than a decade, there has been evidence that Colorado River flows are converging to the levels identified by tree-ring studies (https://hydrowonk.com/blog/2013/03/04/on-markets-and-water-security/).  In fact, since storage at Lake Mead commenced in 1938, the Bureau of Reclamation’s estimates of the annual natural flow of Colorado River at Lees Ferry averaged 14.0 million acre-feet, or 0.3 million acre-feet below the long-term average from a Tree Ring Study.

The Bureau’s June 2022 announcement about the need for immediate curtailments beyond the curtailments under the Drought Contingency Plan is a testament that current tools of risk management are inadequate.

First, the focus on expected elevations ignores the underlying risk of hydrology.  There is a material risk that the actual elevation will fall below the expected elevation.  Especially if there are underlying trends in hydrology not captured by the forecasting model, curtailments will be delayed at the expense of more severe challenges in future years (such as the free fall in Lake Mead’s elevation).

During discussions Hydrowonk had with former Director of California’s Department of Water Resources after California’s 1991 Drought, David Kennedy regretted not curtailing State Water Project deliveries in the late 1980s so that California had more water in storage for water deliveries during the 1991 drought.  A series of small curtailments to reduce a large curtailment later can indeed be a sound economic bargain.

Second, the focus on only “next year’s” elevation ignores potential dynamics driving future water supply availability.  Especially if there is a run of “dry/drought years,” curtailments should be made earlier to maintain storage to address a succession of future dry years.  Not only will one not take advantage of Mr. Kennedy’s bargain, but there will also be a growing risk of reservoir elevations falling below minimum power pools and marching toward dead pool elevations.

Prudent risk management is based on how best to achieve a defined objective in the face of underlying hydrologic uncertainty and economic conditions.  This requires understanding (i) how decision rules impact the likelihood of achieving objectives, and (ii) balancing the cost versus the benefits of achieving the objective.

A comprehensive risk management strategy will adapt as actual hydrologic conditions are realized.  From this perspective, a prudent risk management strategy would have the terms and conditions of curtailment changing over the past decade.  Give the Colorado River Basins states and Mexico their due, they did move to the Drought Contingency Plan in 2019.  By June 2022, the Bureau has concluded that that plan is not sufficient.

Does this sound too complex?  It isn’t.  This is simply an exercise in stochastic dynamic programming.  This tool has been applied to revolutionize golf and how PGA/LPGA compiles statistics and how players select targets (see Every Shot Counts: Using the Revolutionary Strokes Gained Approach to Improve Your Golf Performance and Strategy, Mark Broadie).  (Hydrowonk use has reduced his handicap by 25%!)  If golfers can change how they think about and improve their game, why can’t the water industry?

Since the 1990s, when the Grand Canyon Trust commissioned my study of the implications of river flows following tree ring studies, Hydrowonk has been in the Windshield Brigade.  Therefore, I agree with the perspective that the expectations of the 1922 Colorado River Compact cannot be realized.

Former Secretary of the Interior, Bruce Babbitt, has suggested that the 1922 Compact should be revamped https://www.latimes.com/california/story/2022-05-19/former-interior-secretary-calls-for-revamping-colorado-river-compact.  Admittedly, Secretary Babbitt is a long-ago mentor (he was the lead governor for two books, Troubled Waters and Trading Water, I wrote under grants to the National Governors Association in the 1980s and was gracious enough to write forwards).  Respectfully, Hydrowonk has an alternative viewpoint.

As we all know, the Bureau followed the Drought Contingency Plan in its August 16th announcement as the Basin States were unable to find a mutually agreeable plan to reduce the use of Colorado River water by 2 million acre-feet to 4 million acre-feet above the cutbacks under the Drought Contingency Plan.  Presumably, the Bureau has not changed its position about the required cutbacks to address the challenges on the Colorado River.

Hydrowonk sees two alternatives.  The Bureau can cross its fingers and double down on continued closed door negotiations among representatives of water users.  Or the Bureau can turn to decentralized decision-making and create a platform for voluntary transactions among eligible water users.

Twenty-first century IT (Web 3/Blockchain) can provide the operational capability for creating a Colorado River Water Marketplace (“CRWM”).  The platform must be based on transparent rules regarding eligibility for participation, with records of rights and water use linked to the Bureau’s contracts and operational data.  In other words, the CRWM must have substantial “back-end” infrastructure to assure that trading will, in fact, improve water resource management.

The Bureau should have oversight of CRWM but not operational control, which should be vested to a third party.  Why?  Because the Bureau itself may be an acquirer of water to increase reservoir levels. (The Inflation Reduction Act includes $4 billion to address drought in the west).  In addition to water users, other eligible buyers could be power or environmental interests who purchase water for dedication to increase storage and flows on the Colorado River.  Eligibility criteria should recognize state law regarding the entities who control water rights.

The geographic scope of the marketplace is an important policy decision.  Are there separate marketplaces for the Upper and Lower Basin, or one for the Colorado River Basin?  What about Mexico?  With focus and making devising the rules a top priority, the CRWM can be up and running within a year.

Each state should also re-examine project opportunities, especially by those who seriously mis-read conditions on the Colorado River.  In California, Metropolitan has significant unused capacity in its Colorado River Aqueduct (“CRA”).  Time to revisit the Cadiz Project (disclosure: Hydrowonk has conducted studies for Cadiz).  The project has many ways of addressing water problems.  Water can be delivered to Southern California via the CRA.  The project can provide water to Arizona or Nevada via an exchange of Colorado River water with Metropolitan.  Alternatively, the project can deliver water into the stressed Central Valley via the company’s northern pipeline.

One could also proactively explore binational opportunities.  Water conservation and water development opportunities abound south of the border.  Hydrowonk has been trolling these opportunities since 2010, although given developments in Baja major cities on August 12, one may consider staying off the streets on Fridays.

Continuation of how we manage the Colorado River will not address the emergency identified by the Bureau.  The looming catastrophe can be avoided only if our management strategy changes.  Lawyerly arguing over dueling redlines of the 1922 Compact will solve nothing.  It is time for us to step up and bring creativity, imagination, and innovation to the table.  It is time that we act like we believe that the Colorado River is a unique and socially valuable resource worthy of sustainable management for generations.