Beats me whether the Bay Delta Conservation Plan (“BDCP”) is a doable deal.  My reaction is from a review of the meeting notes and materials posted by Chris Austin in Maven’s Notebook on the July 17th  presentation by the Department of Water Resources.  Ms. Austin has provided an invaluable service of making available detailed meeting notes (in her characteristic factual style) and source documents for her readers.  Whatever one’s view is on the BDCP, all should express their gratitude to Maven.

At this stage, the BDCP is still a “concept deal.” Some concept deals mature into real projects.  Others wither away.  Further refinements in analysis and consideration will determine BDCP’s destiny.  BDCP has problem children:

As the BDCP conversation moves from internal deliberations within DWR and its consultants to the water community, water users, public and (most importantly?) capital markets, BDCP proponents will find that they must address fundamental questions more thoroughly (and in some cases correctly).  A prudent person needs more refinements and analysis before making a responsible “go” decision.

This is the first post in a series on the BDCP.  My purpose is not to advocate on behalf or against the BDCP.  Instead, my purpose is to share my perspective on the factual and analytical foundations behind DWR’s project assessment.  As such, I am drawing upon more than three decades of experience in putting together transactions, conducting due diligence on water investments, and managing projects.

From this perspective, I read Chris Austin’s post of meeting notes and materials as an exercise in due diligence.  Imagining myself in a conference room on the top floor of a downtown office building, the “DWR team” walked into the room to “pitch their deal” to a client.  Here are my observations (commensurate with my remuneration?).

Before sharing my “client” report, let me state the limited scope of my review on project costs.  I’m using DWR’s estimates of costs of the myriad of activities in the BDCP.  I am also focusing on the water facility, although all the considerations discussed below may equally apply to mitigation activities and species conservation efforts.  In effect, my client has asked me “can this dog hunt for water users”?  For reasons discussed in my third post in this series, I look at the viability of public funding for conservation of species.

August 13 update:  Based on feedback, I was unclear about the “scenario” of my posts.  Stratecon does not have a client for this analysis.  Instead, I have taken the approach of SUPPOSE I had a client who asked me to conduct a due diligence review.  As such, what would I say?   The discussion and analysis is SOLELY mine.  I apologize for the confusion.  It has always been our policy (for 30 plus years) to disclose whether any issue written about also involves a client.

How Do the Numbers Work?

As a Ph.D. economist, I’m comfortable with “the lingo”: constant dollars, nominal dollars, discount rates, real interest rates, nominal interest rates, present value and so on.  Below, I focus on the cost of the water conveyance facility that accounts for the bulk of estimated project costs.

Let’s start with the estimated capital cost of the BDCP’s water facility.  DWR estimates the sum of annual construction, design and (construction) permitting costs incurred over the first 10 years of the project at $14.5 billion (2012$) (Table 8-7, Chapter 8).  The estimate is in 2012$; that is, the estimated cost of the project under 2012 market conditions.  The cost estimate reflects historical cost estimates prepared in earlier years adjusted by “various price indices, including consumer price indices . . . and civil works construction cost indices . . .” (section 8.3.3, Chapter 8).

What is the project’s anticipated start date?  Not explicitly stated.  I take a hint that the “first year of the project” is after receipt of permits from federal and state environmental agencies and through the permit term (section 8.3.1).  Diving deep into the background materials, the first project year is evidently  2016 with construction expenditures occurring through 2025 (see Table 8-49, Chapter 8).  A simple declarative sentence would have been appreciated–“assumption: the project starts in the year 2016.”

Under these assumptions, the present value of capital expenditures on the BDCP water facility is $12.7 billion (2012$) as of (the unstated valuation date of) January 1,  2016.  (I was able to replicate within $7 million DWR’s estimate assuming a January 1,  2016 start date for calculation of present value–the small difference is probably due to rounding of numbers.)

DWR excludes three considerations (either by oversight or assumption) that understates the present value of capital costs for the water facility:

As shown below, reasonable accommodation for these considerations increases the estimated present value of capital costs by $1.9 to $2.2 billion.  In other words, federal and state water contractors would have a $14.7 to $14.9 billion obligation to cover on January 1, 2015, not $12.7 billion in inflation-adjusted dollars.

Remarkably, DWR does not discuss the trends in cost indices.  Ironically, it updates historic cost estimates to 2012 with adjustment based on cost indices (see above). Based on the Bureau of Reclamation indices, projecting an annual increase of 1.1% in the inflation-adjusted cost through the construction period of the BDCP project increases the present value of water facility construction costs by $1.4, from $12.7 billion to $14.1 billion (see chart). 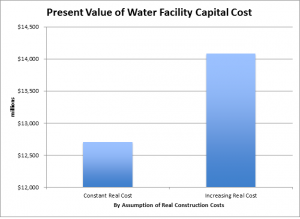 My purpose is not to criticize DWR (their approach is a common one).  Instead, my purpose is to note that perhaps a reason construction projects are almost always more costly than initially estimated is that opinions of probable cost ignore increases in the real cost of construction between the time an opinion of probable cost is prepared and when construction is completed.  Project analysis that ignores the trends in economic conditions misstates project costs.  When real costs are rising, project costs are inevitably understated.  The opposite is also true.

This is a technical issue worth $308 million.  DWR calculates present value evidently assumes that all costs occur year-end.  As a practical matter, cash flows occur throughout the year.  The mid-year adjustment assumes that cash outflows are uniformly distributed throughout the year (consult a finance book for details).  This adjustment is consistent with discussion at the July 17th meeting about taking into account accrued interest when the timing of cash outflows do not match the timing of cash inflows (more on this in my next post in this series).

DWR expressly does not develop a finance plan as part of its project assessment.  While this is common practice, this materially understates the cost of BDCP capital investment.  Capital financing is not free.  Underwriting costs alone could be hundred of million of dollars.

There is good news about debt reserves.  During the term of the financing, short-term interest can be earned (present value of interest earnings is $76 million assuming a 1% return from short-term, low risk instruments).  When the bonds are paid-off, the debt reserve could also be released back to water users.  Assuming that the term of the financing is 40 years, the present value of having $409 million released in 40 years is $72 million.  Therefore, the net cost of the debt reserve is $260 million (rounded).

In other words, by not developing a finance plan, DWR’s cost analysis is incomplete.  Again, DWR’s approach is common in the industry.  Economics and finance teach that the present value analysis (provided that one chooses the “correct” interest rate) accurately takes into account financing.  The “correct” interest rate includes the interest payment to financiers plus an amortization of financing costs, such as underwriting costs (which are not included in my estimate) and debt reserves (which are included).  Again, more on this in my next post in this series where the reader’s bonus is yet another concept of interest–“true interest cost”.

The table below collects the adjustments (I show the range of the debt reserve depending on whether a debt reserve involves six months or one-year of maximum annual debt service):

Economics and finance must be integrated into project cost assessment and DWR’s assessment of the BDCP water facility is no exception.  Actual project costs depend on market conditions when they are built, not years earlier when preliminary cost analyses were prepared. Project financing includes more than interest rates.  Financial reserves must also be committed.  We will see that the finance plan will also have a critical impact on water costs incurred by water users when we discuss debt coverage ratios.

With a $14.7 to $14.9 billion estimated capital cost obligation, what is the cost of water for water users?  See my next post in this series on interest rates, risk premium, risk assessments and the cost of water.