This second post in my BDCP series answers the question that eludes readers of the Department of Water Resources (“DWR”) materials and participants at DWR’s July 17th presentation:

What is the cost of water to state and federal water contractors?

As explained below, the answer depends on interest rates and risk assessments.  I conclude that a reasonable range for the cost of water for state and federal contractors is substantial and depends on DWR’s Delta outflow scenario:

These cost estimates are for water delivered at Banks and Tracy pumping plants.  The valuation date is 2016.

The cost of water results from a comparison between BDCP water facility costs incurred versus the volume of water delivered.  DWR’s presents estimates of the cost incurred in Chapter 8 of DWR’s materials, although it under-estimated the present value of capital costs for the BDCP water facility by $2 billion. 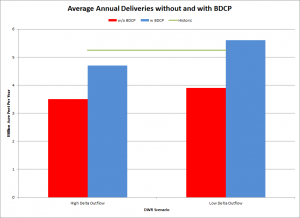 DWR forthrightly notes that the BDCP’s water facility is attempting to offset the anticipated losses in future water supplies under increasingly stringent regulation and climate change.  Under the high Delta outflow scenario, state and federal contractors face shortfalls of about 500,000 AF/year in average annual deliveries even with the BDCP in comparison to historical deliveries over the past 20 years.  Under the low Delta outflow scenario, the BDCP can deliver about 300,000 AF/year to 400,000 AF/year more than historical deliveries.  Averaging over these scenarios yields the increasingly common characterization of the BDCP:

There is a mismatch between the timing of capital commitments and the water supply benefits of the BDCP water facility (see chart).  State and federal water contractors must put up about $15 billion in present value of capital commitments a decade in advance of receiving water deliveries over the 50-year term of the take permit.

From an economics and finance perspective, the capital commitment schedule is fundamentally different from the water supply schedule.  The risk profiles are different.  Even with construction risks and pricing risks through the construction period (significant in their own right), the water supply benefits probably face higher risks.  In any case, the risk profiles are different.  The estimated average water deliveries generated from the BDCP water facility are from computer model runs.  The assumptions and model structure may not accurately reflect actual future conditions (this is not a criticism of DWR modeling; this is the risk of all modeling exercises).

How does one compare the relative risks of costs and water supply benefits?  The answer requires an excursion into interest rates and risk assessments.

Federal guidelines for water project valuations also recommend considering the risk and uncertainty of projects.  One recommendation is to use the “certainty-equivalent method”–discounted expected cash flows (reflecting the probability and consequences of risks) using the “risk-free interest rate” adjusted by the financial risk of project uncertainty (measured by the extent to which cash flows are related to general market conditions).

From this perspective, DWR’s analysis is partly on track.  On the positive side, DWR’s use of the risk-free interest rate is reasonable to the extent (which I believe is reasonable) that project risks are not related to general market conditions.  On the other side of the ledger, DWR may not fully address project risks.  To its credit, its analysis of average water deliveries considers hydrologic uncertainty and other regulatory factors incorporated into their water supply models.  Are there no other project risks?

The discussion at DWR’s July 17th presentation did raise issues about DWR’s interest rate assumption—a reasonable subject for debate.  However, the focus on interest rates used in other investments (transportation projects and other infrastructure) is not on point.  Risk assessments should focus on the consequences of project and water supply risk and include them directly into the calculation of expected cash flows.  This approach is also discussed in federal guidelines.  Water projects are not like transportation projects, commercial real estate projects, agricultural investments or any other type of investment.

The Cost of Water

How does one measure the cost of water?  I use the following approach:

I originally proposed this cost concept, “ESP” (equivalent single price) in Water Strategist in the 1990s.  My proposed ESP was a fixed nominal price.  Metropolitan Water District of Southern California (“MWD”) later developed a related concept, Relative Unit Value, which measures the value of water (increasing at an assumed rate, such as the rate of expected inflation) applied to expected water deliveries over the life of a project so that the present value of benefits equals the present value of costs.  The 1998 Long-Term Water Conservation and Transfer Agreement between the Imperial Irrigation District and the San Diego County Water Authority also used a similar concept to compare the cost of water across projects in its price redetermination section.  Therefore, the metric used is becoming a common way to measure water costs. 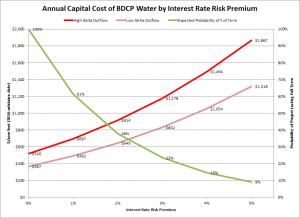 Risk premium in interest rates are equivalent to implied early termination risk.  The green line in the above chart shows how the expected probability of the BDCP water facility reaching the full term of the take permit declines with the risk premium.  A 1% risk premium is equivalent to assuming that there is only a 60% chance of the BDCP water facility operating to the full term of the take permit.  Higher risk premium yield lower expected probabilities.  As a practical matter, a BDCP water facility where project risks call for a 3% or higher risk premium may prove economically unviable.  Annual  capital costs of water would exceed $800/AF for the Low Delta Outflow scenario and exceed $1,100/AF for the High Delta Outflow scenario. 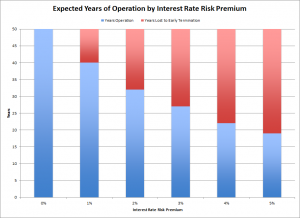 Turning the discussion around, the risk assessment must find that the risk of the BDCP water facility investment and water supply is on the order of a 1% to 2% risk premium.  Otherwise, “this dog won’t hunt.”  If this dog hunts, I conclude that the reasonable range for the estimated cost of water for state and federal contractors based on capital costs alone is in the following range:

Averaging across the  scenarios, I conclude that a reasonable range for the cost of water is:

Why is the cost of water so high?  The major reason is the decade delay between the $15 billion capital commitment and the delivery of water.  At the DWR July 17th presentation, there was a question about the accrued interest on debt during the construction period.  The back and forth between the questioner and Jerry Meral, Deputy Director of the Natural Resources Agency suggested that “tax payers” must bear the burden of accrued interest.  They need not be the case at all.  Bond financings can be structured that they are funded directly by state and federal water contractors.  Of course, without a proposed finance plan, one can not comment on whether that is the case with the BDCP water facility.

From Water Costs to Water Rates

Without a finance plan, one must be hesitant about drawing conclusions from these estimated water rates.  In years when the project operates “as planned”, the debt coverage ratio generates net cash flow for the project.  What happens to the money?  Is it placed into reserves and funds future replacements and repairs?  If so, then future water rates would not need to cover future replacement and repair costs.  Alternatively, do the reserves accumulate and refunded to water users at the end of the take permit term?  As with the analysis of the debt reserve requirement in my first post, water users may ultimately benefit in some form from the net cash flow generated by the debt coverage ratio.  Like the debt reserve requirement, I’m skeptical that the benefit (in whatever form it is) will fully offset the economic value of the higher water rates required by the debt service ratio.

State and federal water contractors would pay a hefty price for water supply generated by the BDCP water facility.  The ranges of estimated costs offered above are wide.  Understandably, narrower ranges would be better.  Undertaking two fundamental aspects of project valuation can narrow the ranges:

Without these tools, the BDCP water facility will remain a “black box” concerning investment risks and a potentially large, undefined financial obligation for state and federal water contractors.

Do not construe this post as opposition to the BDCP.  The numbers reflect the facts considered and the methods employed.  My objective is to assure that the public discussion of this once in a generation investment in water proceeds with a thorough examination.

Like my last post, the absence of a finance plan severely limits the ability of anyone to definitely discuss project costs and implications for water users.  Again, putting off the finance plan is a common practice.  It is time for the industry’s practices to change.  Otherwise, the BDCP water facility can be discussed for the next couple of years, but the “real discussion” will not start until a finance plan is prepared.  Once that effort starts and consultation with the capital market commences, project proponents will find that they will run into a myriad of questions about risk assessment.  By that time, project definitions will be hardened.  Should not project design be coordinated with risk management?

Even if the final and definitive assessment remained in the neighborhood of this post, it does not follow that the BDCP water facility is a bad investment.  Nothing is good or bad save the alternatives that make it so.

As seawater desalination becomes an increasingly important part of California’s water supply scenario, the BDCP water facility is still generating water at a significant discount in comparison to desalination.  (This comparison must take into account potentially significant differences in supply reliability, location, and counterparty risk.)  Having said this, there will also be issues about the ability and, more importantly, willingness to pay by water users.  There are significant implications about how to integrate the BDCP water facility into the existing state and federal projects.  I will turn to these issues in subsequent posts in this series.