This week, I was looking at a curious set of pictures of the United States at night from space (see the pictures here). The pictures show heavy concentrations of lights around the places you would expect – New York, Chicago, Las Vegas and Los Angeles – and in a place where you would not expect. There is a mass of lights up near the Canadian border, in a place where you would not expect large populations. In fact these lights do not mainly come from people’s houses but rather from the huge numbers of oil rigs that now dot the Bakken Shale Formation in Western North Dakota.

Proponents of drilling in the Bakken Shale cite the economic growth that oil drilling has brought this once quiet region. They also point to the fact that an increase in drilling in the United States reduces our dependence on foreign oil and increases our national security. However, while the pluses are certainly tangible, there are some real tradeoffs to the practice. In this article, I would like to look at the critical role that water plays in drilling in North Dakota, and if there is a way to keep the drilling sustainable without depleting the state’s water resources.

There is no doubt that oil production in North Dakota has brought economic benefits to the state. While many state governments (not to mention the Federal level too!) are facing massive budget deficits, North Dakota enjoys a $1.6 billion budget surplus. In a time where much of the rest of the country still faces unemployment rates around 7%, North Dakota’s official unemployment rate is 3.5%. Most of the jobs that the state has created link back to the drilling of oil. Average wages have also increased significantly. According to the Federal Reserve Bank of Minneapolis, average weekly wages in the North Dakota counties that drill oil have more than doubled from $573 per week to $1,255 in the period from 2003 to 2013 (please see the graph below). Compare these figures to the US as a whole: average weekly wages in the US increased from $881 a week to $949 in the same period. 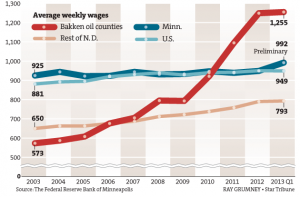 While there are great economic benefits to the citizens of North Dakota, inevitably there are some tradeoffs. One of the major issues the state faces is that fracking uses significant amounts of water, and the practice is putting strains on the state’s available water resources. When drilling in the Bakken Shale, each well needs between 1 and 3.5 million gallons of water to unlock the oil deep underground. To complete this task, drillers mix water with a variety of chemicals and force it underground to activate the well. This procedure unlocks the vast domestic oil resources that we have, but it has a few side effects that certainly need to be considered to determine the long-term sustainability of this practice.

The biggest concern is the long-term sustainability of the water supply in the state. Since delegates wrote the state’s constitution in 1889, the state has held the water supply in trust as a public resource. Anyone in the state with access to either groundwater or surface water can apply for a permit to extract water. According to an August 6th article in the High Country News, between 1980 and 2007, the state issued 10 permits to businesses who wanted to establish water depots to serve the oil and gas industry. Between 2007 and today, the number of permits has increased 6-fold. And currently, there are few if any limits on the amount of water that each water depot can extract. The article points out that the state’s application process is not currently onerous as long as the new permits won’t “unduly” affect existing permits, which have priority. However, conflicts have already arisen as to whom should have access and priority to the state’s water resources.

Currently, a small consortium of water permit holders called the North Dakoa Independent Water Service Providers (IWSP) provides much of the water to drilling companies. The drilling companies’ need for water and the state’s push to expedite oil drilling permits has made the business of selling water a profitable one. But the IWSP is not alone in trying to reap the benefits from the need for water resources. Oil drillers have applied for their own water permits in the state. In 2012, Select Energy company based in Texas received a permit to pull nearly 6 billion gallons annually from Lake Sakakawea, a reservoir along the Missouri River.

The state is also getting into the business of selling water directly to drillers. The rural areas of the state have grown substantially as the oil fields grow, and the population boom puts strains on the rural water and transportation infrastructure of the state. Watford City, the largest town in the main drilling area has grown from a population of 1,744 in 2010 to an estimated 6,500 today. In response, the state created its own cooperative of water producers called the Western Area Water Supply Authority. The Authority’s expressed purpose is to provide residential water infrastructure to the rapidly expanding towns. It is paying for this water infrastructure by selling 20% of its water entitlement to oil drillers, and they have already built nine depots. This new competition is not sitting well with the IWSP.

Throughout the year, the Water Supply Authority has used its stature in the state government to launch an aggressive legal and lobbying campaign against the IWSP. The IWSP has pushed back, saying that a governmental agency should not get into the business of competing against private citizens. The competition is pushing down the price of water, leaving less revenue for both sides. According to Jeanie Oudin, an energy consultant with the firm Wood Mackenzie, the increased competition could push down water prices by 10% over the next few years. The move down in prices could make competition more fierce and even increase the production of water for drilling.

Is this path that North Dakota on sustainable? Will at some point the state have to face long, drawn-out adjudication fights like California has seen in some of its basins? It is hard to tell at this point. Currently there is enough water for the state’s demands, but the increased population as well as the increased demands that the oil industry puts on the supply will leave the long-term supply of the state in jeopardy. Now is the time that all of the stakeholders should sit down and determine how best to supply industry and its citizens with the water they need to keep the state’s booming economy going. If the squabbles continue, the state will have to make even tougher decisions when the water supply becomes scarcer. We can either manage the interface between oil and water now, or we can wait until fights over water erupt and make decisions in a crisis. Either way, both interests will sit at the table… so why not do it in a proactive manner? With proper foresight, planning and proper resource management, I believe that oil and water can mix.