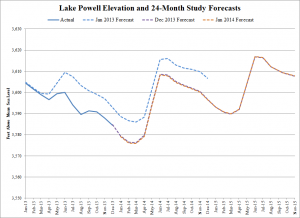 A stock analyst would note that the elevation of Lake Powell will reach “higher highs” and “higher lows.”  Looks like a recovery. 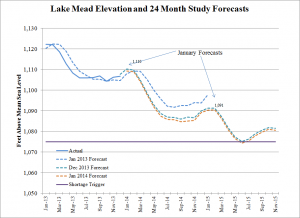 A stock analyst would note that the elevation of Lake Mead will reach “lower highs” and “lower lows.”  Looks like a declining trend.

What Does History Show?

A look at the historical record of Lake Powell and Lake Mead elevations tells an interesting story.  From 1964 (the first year of Lake Powell storage) through 2001, the January elevations of both lakes generally followed each other—rising together until the late 1980’s, falling together in the early to mid-1990s, and reaching a peak high in 2001 (the correlation between elevations was 0.92).  Elevations started falling afterwards, although Lake Powell’s elevation started a recovery in 2006 while Lake Mead’s elevation continued declining.  Since 2002, the January elevations of both lakes do not move as closely together (the correlation between elevations is small, 0.15). 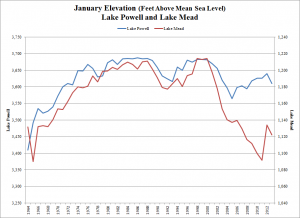 Both the Bureau’s forecasts of future elevations and the recent historic record show that the dynamics of Lake Powell and Lake Mean elevations are different.  Why?

Hydrowonk is looking into this.  Once I figure it out, look for the analysis in JOW Corner in the Journal of Water (www.journalofwater.com).

7 thoughts on “A Tale of Two Colorado River Basins”