Hard times stress relationships.  The situation on the Rio Grande River is no exception.  Texas is amidst severe drought.  Texans wants Mexico to release more water into the Rio Grande to ease the economic losses from the current multi-year drought https://hydrowonk.com/blog/2013/09/11/water-supply-in-texas-a-two-part-series-on-the-ongoing-challenges-the-lone-star-state-faces.  Texan political leadership’s growing frustration with inadequate water supplies on the Rio Grande has prompted thoughts of cutting funding for the implementation of Minute 319.

Rather than bickering, Texas and Mexico can be better served by collaboration.  After discussing the current situation, I outline the basics of a “grand bargain” between Mexico and Texas.

Under the 1944 Treaty between the United States and the Republic of Mexico, the United States receives one-third the flow of the Rio Conchos, a river in Mexico that flows into the Rio Grande just south of Presidio, Texas.  Mexico’s treaty obligation is to deliver an average of 350,000 acre-feet annually over five-year periods.  This year is the third year in the current five-year cycle.  To date, Mexico has delivered just over 700,000 AF of water to the Rio Grande (see chart from International Boundary and Water Commission). 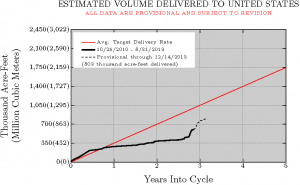 From a perspective that Mexico should deliver 350,000 AF annually in each year of the current five-year period (which Mexico is not obligated to do), Mexico is “behind” almost a full year of deliveries (350,000 AF).  Can Mexico deliver over 1 million AF of water into the Rio Grande over the next two years to meet its treaty obligation for the current five-year period?

As a result, Texas will face deliveries from Mexico that are the lowest when they are needed the most (during drought) and the highest when they are needed the least (during wet conditions).  Whether Mexico will meet its five-year delivery obligation depends on Mother Nature (will drought conditions be offset by sufficiently wet years during a five-year cycle so Texas receives 1,750,000 AF over the five-year cycle)?  History sometimes says yes, such as during the five-year cycle starting in 1988 when Mexico reached its delivery obligation within three years (see chart from International Boundary and Water Commission).

History also says no, such as during the 1990s and earlier this century.

U.S. Senator John Cornyn (R-TX) and Congressman Filemon Vela (D-TX) have suggested funding cuts for implementation of Minute 319 if the International Boundary and Water Commission does not take action to improve Rio Grande water deliveries from Mexico http://journalofwater.com/jow/legislators-hint-at-possible-funding-cuts-for-minute-319/.  In a letter to IBWC Commissioner Edward Drusina, Senator Cornyn and Congressman Vela argue that the IBWC has responsibility to address Mexico’s water deficit.  “Early detection and evaluation of a particular problem and the development of measures for resolution is part of the core mission of the IBWC,” they wrote.

In Senator Cornyn’s and Congressman Vela’s press release, Carlos Rubenstein, Chairman of the Texas Water Development Board said, “(t)he fundamental problem remains that Mexico does not recognize the U.S. as a water user under the treaty and does not set aside any water for treaty compliance.”  “To the extent that remains unchanged, water reliability under the treaty for the Lower Rio Grande Valley in Texas will remain at risk.”

A Lesson from Minute 319

Minute 319 provides a framework for bi-national collaboration on the management of water resources in the Colorado River Basin, including international water projects and water exchanges https://hydrowonk.com/blog/2013/01/14/minute-319-sets-pathway-for-long-term-mexico-us-water-projects/.  The Seven Basin States (Arizona, California, Colorado, New Mexico, Nevada, Utah and Wyoming) and the Republic of Mexico recognize that management of bi-national water resources requires bi-national cooperation.  The self-interest of the parties and their recognition of the needs of the Colorado River Basin brought parties to the table.

Outline of a Grand Bargain on the Rio Grande

As in the Colorado River Basin, Mexico and Texas could address problems on the Rio Grande River through collaboration.  Identify changes in operations and institutional structure so that treaty obligations are satisfied.  Consider “firming up” Texas’s water supply in droughts.  As in the Colorado River Basin, find and carry out projects to conserve water and develop new supplies.

From Texas’s perspective, they have the potential to firm-up the reliability of their 350,000 AF annual supply under the 1944 treaty and receive more water supplies from water conservation and water development initiatives.  From Mexico’s perspective, the agreements would include payments to assure Chihuahua benefits and funding for improved water resource management and development.  The deals would give an incentive for Mexican politics to fill the “donut hole–where the Republic of Mexico’s treaty obligations to Texas have not been institutionalized—so that the State of Chihuahua has an incentive to manage its resources with Texan interests in mind.

In other words, are there mutually beneficial deals on the Rio Grande?

Why not try this approach on the Rio Grande?  Create, don’t litigate.