Last week, the National Security Administration’s often-maligned surveillance programs received headlines for quite an unusual reason: Protesters and civil rights activists in Utah are trying to use a local municipality’s control over water supplies to stop the construction of a new NSA “data mining center”. The NSA plans to open a new data analysis center in Bluffdale, Utah, a suburb of Salt Lake City. The data center will need a steady supply of water to cool its massive computers that presumably scan everything from terrorists’ communications to this blog piece about the NSA’s facilities.

According to a December 4th edition of Time Magazine, opponents of the NSA’s surveillance program have formed a coalition called OffNow to urge lawmakers in the state and the local water district to rescind their agreement with the NSA to supply the project with water. Beyond the civil rights controversy that the NSA programs bring up, OffNow takes exception to the fact that this facility will receive below-market rate water prices in order to help spur economic development and construction in the surrounding areas. Why do I bring this story up? Water is an absolutely crucial component to the economic development of any economy, and some recent studies suggest that areas of the country like Salt Lake City may face reduced water supplies in the years to come. As in this situation, state and local governments will have to face the reality of finding a balance between the need for economic development and long-term water conservation. In this piece, I will address the current water supply trends in the State of Utah, and how the state can better plan for its future water needs.

Salt Lake City and its suburbs rely on the runoff from the Wasatch Mountains to the east of the city. Yes, the same snow that blankets some of the ski resorts many people enjoy in the winter become part of the drinking water supply for the people of Salt Lake City. The city relies on about half a dozen rivers that collect snowmelt on the western side of the Wasatch Mountains for its water supply. Please see the map below for details of Salt Lake City’s main water resources. But new studies suggest that this water supply has an uncertain future. The main cause? Climate change. 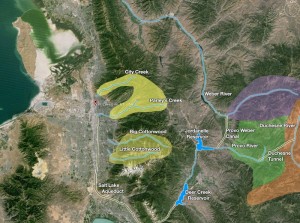 A new study that the Cooperative Institute for Research in Environmental Sciences (CIRES, a division of the National Oceanic and Atmospheric Administration) penned concludes that rising average temperatures in Utah and across the Western United States could have negative implications for long-term water supplies. Utah’s average temperatures have increased by two degrees over the last century, and the summer months have experienced the most drastic increases in temperature. While two degrees over the course of a century may not seem like much, the study’s authors believe that rising temperatures could have far-reaching effects.

The study estimates that for every degree rise in the average temperature in the Salt Lake City area, the annual flow from the streams that supply the city’s water supply could drop by 1.8 to 6.5 percent. The increase in temperatures can potentially put strain on water resources in a few ways. First, if temperatures rise, more of the precipitation in the region will fall as rain rather than snow. As such, the change will lead to earlier runoff and less flow in creeks and streams later in the season because snow acts as natural water storage.  Second, since the water sources will provide less water as the summer and fall progress, water suppliers will have a harder time providing resources to its farmers and citizens. While these issues may seem challenging to solve, the solutions that leaders in Salt Lake City implement may become an example for other regions across the Western United States that face the same issues.

The challenges going forward for Salt Lake City are daunting, but the City is taking some steps to plan for its uncertain water future. According to a November 1st article in The Salt Lake Tribune, the four streams highlighted in yellow in the above picture (City, Parley’s, Big and Little Cottonwood Creeks) account for 50-60% of the city’s water supply. Tim Bardsley, the lead author of the CIRES study said that the study focused on these streams due to their importance to the City. He said, “We focused on those four creeks because they are a primary supply that runs right into the city. It is the timing of stream flow that is of particular importance to Salt Lake City.” He concludes that climate change may affect these lower elevation streams more than the city’s water resources at higher elevations. As such, the study recommends that Salt Lake City determine ways to increase the harvest from its higher elevation streams that climate change may impact less.

The study also recommends a common theme that many states across the west are adopting: increased water storage. Regardless of climate change, precipitation tends to come in wet and dry cycles in the Western United States, and water districts need to plan accordingly for dry seasons. Salt Lake City will look to underground aquifers for storage capacity that they need. Laura Briefer, Water Resources Manager for the Salt Lake City Department of Public Utilities said, “We don’t see a whole lot of new places for surface storage of water. [But] We are experimenting with, and looking at, aquifer storage.” Creative water storage solutions may hold the key to many region’s supply challenges.  As I discussed in last week’s column (Read it Here), California’s Bay Delta Conservation Plan needs more robust storage to capture runoff when Mother Nature supplies it. Without ample storage, cities will simply squander the excess water that comes in a rainy season. If Utah is successful in building more storage to capture water during rainy seasons, other cities can use their experience as a model to emulate for their water needs.

Climate change is a sensitive political issue. Regardless of what you may believe is causing climate change, the changes in temperature are happening and it is causing changes in our water supplies. By focusing on harvesting more water from potentially less volatile supplies and focusing on storing as much water as possible to use in dry years, we can pave the way for more stable water supplies in the future.