Last week, Rod Smith wrote about the changing elevations of both Lake Powell and Lake Mead. You can view his piece here. In his post, he delved into the mystery of why the elevation of both lakes is not as tightly correlated in the last ten or so years as they were in the past. It is an interesting issue-, and I am looking forward to an answer as to why. What is not nearly as much of a mystery, however, is the fact that the Colorado River Basin is providing less and less water to more and more end users. In this piece, I would like to explore the implications of the decrease in water supplies across the entire Colorado River Basin, and the potential long-term implications this change has on the cities, agriculture and citizens in the Western United States that closely rely on the river’s water. 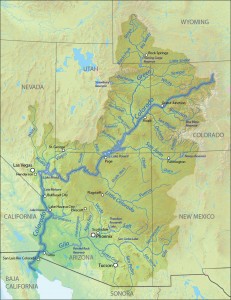 As you may know, the Colorado River is the primary river system in the Western United States. Seven states and the nation of Mexico rely on its waters to irrigate agriculture and provide drinking water to about 40 million people. In the United States alone, cities from San Diego to Denver and everywhere in between rely to some extent on water from the Colorado River. The River is also incredibly important to agriculture and the economy of the West. Have you eaten lettuce this winter? There is a very good chance that the lettuce you are eating now was grown in Southern California or Arizona along the Colorado River, one of the only places in the US that can support a winter growing season.  Yet all these groups who place demands on the Colorado’s water may have to re-think their needs if the drought that grips much of the Western United States continues for much longer.

So if this is a potential glimpse into the future, are we ready for the challenges ahead? The crux of the issue is that so many people rely daily on the spigot of the Colorado River to sate their thirst. The City of Las Vegas is a prime example. According to Rod’s data in the article he wrote last week, Lake Mead currently sits at about 1,106 feet above sea level. According to the January forecasts, Lake Mead could drop by another 20 feet this year. The drop would bring Lake Mead perilously close to levels where rationing measures would have to take place. An elevation of 1,075 feet would trigger a shortage and water rationing. At 1,050 feet, further water rationing would take place and the first water diversion to Las Vegas would run dry. At 1,000 feet, a second Las Vegas water diversion out of Lake Mead would run dry.

What does this all mean for the Western United States? In times of plenty, we forget about how important the Colorado River is to our livelihoods. We take for granted that the River would always provide us with enough water. Until recently, the Colorado did provide that assurance. But we can’t rely on the past to predict the future. Last year, the Bureau of Reclamation estimated that by 2060, the annual demand for Colorado River water could exceed supply by 3.2 million acre feet annually. While agriculture uses the bulk of the River, the population in cities that need the Colorado River for water resources will continue to swell. The Colorado provides water to about 40 million citizens currently. By 2060, that number could swell to almost 76 million.

My point in this piece is that we likely cannot rely on the Colorado to provide us with as much water as it has in years past. And even if the river does supply us with as much water, there will very likely be more demands on it. Now is the time to think about what each state that relies on the River can do to lower their water demands. It is much easier to plan for future challenges now rather than when a challenge becomes a full-blown crisis. I also believe that it is a great time to start thinking about further collaboration between the states that use the Colorado River. In the Journal of Water, (view the piece here) Rod Smith wrote about how Pat Mulroy, the General Manager of the Southern Nevada Water Authority urged the users of the Colorado River to collaborate at their 2013 annual meeting. In a time where Washington and our state legislatures are mired in gridlock, we must look past the partisanship to create long-term collective solutions to the supply challenges that our entire region faces. We all face these issues, so we must find some common ground to solve these problems.

When will the drought in the West break? No one knows for sure. But until then, prudent planning, collaboration and reductions in water use will go a long way towards ensuring that our water usage from the Colorado River remains sustainable.