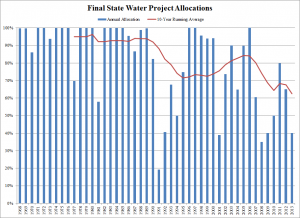 The period of 90%+ SWP Allocations corresponded to the scheduled build-up of the SWP (see build up chart).  SWP Contract Amounts grew until 1990.  Therefore, the relevant historical period for thinking about SWP Allocations going forward is the post-1989 record.  After the Monterrey Amendments to SWP contracts, SWP contractors now request their full contract amount each year. 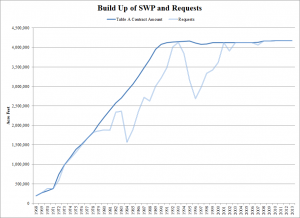 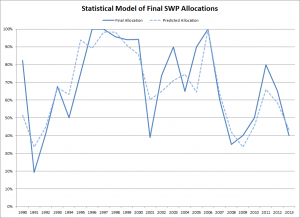 Storage in Oroville stood at 1,633,286 AF at the beginning of the water year, only about 400,000 AF below the 1990-2013 average (2,030,963 AF) and about 540,000 AF above the minimum amount of water in storage at the start of the water year (2008-2009 when the SWP Allocation was 40%).  The problem, of course, is low precipitation.  For the first three months of this water year, actual precipitation has been only 17% of the average for 1990-2013.  Assuming that the remaining months will average only 17% of average, precipitation will remain low despite the variability in monthly precipitation in the historical record. 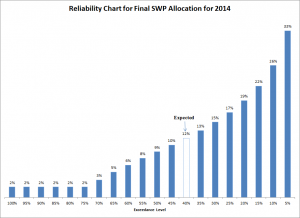 Mother Nature will not bail out California.  In the 1991 drought, the Final SWP Allocation was 19% when there was a “March Miracle.”  The odds are not good for a repeat of 1991.  2014 will be significantly worse.  The Final SWP allocation will be about one-third 1991’s Final SWP Allocation.  As noted in this Monday’s Wall Street Journal editorial, “the chickens have come home to roost” after decades of gridlock in California.