As stated in my earlier post, the analysis placed a 2% minimum SWP Allocation, which would be only 83,000 AF of SWP water allocated.  I admit that DWR surprised me by going to 0%.  Should have stayed with my model.

The chart below shows the Reliability of the Final SWP Allocation with and without the 2% minimum. 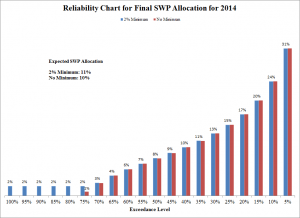 The conclusion of my earlier post may warrant repeating:
Mother Nature will not bail out California.  In the 1991 drought, the Final SWP Allocation was 19% when there was a “March Miracle.”  The odds are not good for a repeat of 1991.  2014 will be significantly worse.  The Final SWP allocation will be about one-third 1991’s Final SWP Allocation.  As noted in this Monday’s (January 27, 2014) Wall Street Journal editorial, “the chickens have come home to roost” after decades of gridlock in California.