In the last week, President Barrack Obama and Jerry Brown have rolled out drought relief packages. Pundits have expressed their opinions both for and against these packages, and they have also used these proposals as a venue to opine on everything from the Bay Delta Conservation Plan to Climate Change. Both packages try to address both short-term and long-term issues related to the drought, but will they be successful towards these goals? In this piece I will address the details of both of these measures and how effective I believe they will be towards curbing the drought that California faces. Let’s start first with the President’s proposal.

President Obama’s trip to the Central Valley and his relief measures:

President Obama spent Valentine’s Day in the Central Valley of California, touring parched farms in the area and promising relief for affected farmers and communities. During his remarks, the President called for politicians on both sides of the aisle to drop partisan bickering over water issues. Knowing the political tensions that water issues can cause, he said, “We’re going to have to figure out how to play a different game. If the politics are structured in such a way where everybody is fighting each other and trying to get as much as they can, my suspicion is that we’re not going to make much progress.” He then proposed the following emergency package to help farmers and communities in need: 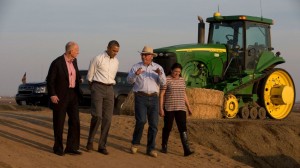 During the same time, Senators Diane Feinstein and Barbara Boxer announced $300 million legislation aimed at helping drought-stricken areas. Their proposal was very carefully worded; the legislation essentially would make it easier to make water deliveries through the Bay Delta, but the measure at the same time would not lift environmental regulations mandated to protect endangered species such as the Delta Smelt. According to Senator Feinstein’s Press Release, the proposal “Provides federal authorization and orders the Interior and Commerce Departments to cooperate with a California Water Resources Board plan to keep the Delta Cross Channel Gates open as long as possible to allow more water to be delivered without endangering migrating salmon.”

What can we make of the Federal proposals? The livestock disaster aid, food bank support and rural community aid will help to relieve the stress that the drought is causing in areas reliant on farming or with dwindling water supplies. But long-term, these plans will not do much to address future droughts. Environmental interests are concerned about protecting endangered species such as the Delta Smelt and salmon populations regardless of the drought conditions. The Feinstein plan will have to walk a tightrope between providing excess water from the Delta and appeasing environmental groups. I doubt that either side will be completely content with her proposal. Also, neither of these plans addresses a key point that Rod Smith and I both have addressed in a few previous columns: Droughts will continue to affect us unless we build adequate amounts of storage to provide for our water needs during the dry years. While these plans may provide temporary solution, neither provides solutions to address the root causes of the challenge California faces.

• $549 million from the accelerated expenditure of voter-approved bonds, Proposition 84 and Proposition 1E, in the form of infrastructure grants for local and regional projects that are already planned or partially completed to increase local reliability, including recapturing of storm water, expand the use and distribution of recycled water, enhance the management and recharging of groundwater storage and strengthen water conservation.

• $20 million transferred from the Greenhouse Gas Reduction Fund to the Department of Water Resources (DWR) for direct expenditures and grants to state and local agencies to improve water use efficiency, save energy and reduce greenhouse gas emissions from state and local water transportation and management systems.

• $14 million for groundwater management across the state, including assistance to disadvantaged communities with groundwater contamination exacerbated by the drought.

• $10 million transferred from the Greenhouse Gas Emissions Fund for the California Department of Food and Agriculture to invest in irrigation and water pumping systems that reduce water use, energy use and greenhouse gas emissions.

• $10 million transferred from the Greenhouse Gas Emissions Fund for the DWR to establish a grant program for state and local agencies to implement residential, commercial or institutional water efficiency projects that reduce water and energy use.

• $15 million from the General Fund for Emergency Drinking Water Fund to address emergency water shortages due to drought.

• $13 million from the General Fund to augment the California Conservation Corps and local community conservation corps to expand water use efficiency and conservation activities and to reduce fuel loads to prevent catastrophic fires. 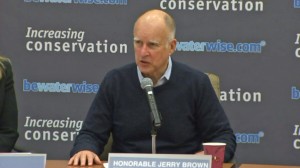 Governor Brown’s package, like the President’s proposal, has both pros and cons. I like the fact that the vast majority of these funds are supposedly going towards the acceleration of “shovel ready” groundwater storage and recharge projects. But some pundits argue that while we will build planned projects faster, the proposal will do nothing to address further water storage needs in the state. Further, opponents of the measure argue that it does little to rein in what they view as excessive water use from the farming and oil industries.

When a reporter asked President Obama about the lengthy political wars waged over water in California, he quipped, “I’m not going to wade into this. I want to get out alive on Valentine’s Day.” His joke unfortunately reflects a touchy political subject. The harsh reality in this drought is that Mother Nature provides us with only so much water. It is up to our political and business leaders to determine what interests will receive water, and how much. So while these measures will help to alleviate some of the negative effects of the drought, it is impractical to think that these measures will solve all of our water woes.

2 thoughts on “Will the Aid Packages for California Help to Dampen the Impact of the Drought?”