California’s State Water Project is the backbone of the California economy.  The recent declaration of a zero water allocation for 2014 has exposed the California economy’s vulnerability to decades of political gridlock and ineffective water agency action.  Last Friday’s announced allocations for the federal Central Valley Project piled on.  Unless changes are made promptly to California’s “water culture”, look for California growth to come to a screeching halt.  To quote Reverend Wright (admittedly out of context), “California, the chickens have come home to roost.”

This post is the first of an eight-part series on Rethinking California’s Water Industry.  In this post, I analyze the economic implications of the unreliability of the State Water Project, including the use of State Water Project (“SWP”) water for real estate development.  Carryover storage capacity owned by water users and having more than five times SWP contracts needed to cover water demands are critical.

Water wonks know the facts.  The SWP provides water to over 25 million Californians (two-thirds of California’s population).  It also provides water to over 750,000 acres of California’s most productive irrigated lands.  The SWP’s infrastructure traverses the backbone of the Golden State.  Look outside the window of a Southwest Airlines flight between Ontario and Sacramento and see most of this mammoth project.

The total contract amount for the State Water Project is about 4.2 million acre-feet of water.  The SWP, of course, does not have enough water to meet its full contractual obligations.  Instead, California’s Department of Water Resources (“DWR”) declares a percentage water allocation each year, based on the amount of water in storage in Oroville in the fall and the precipitation in the Northern Sierra. 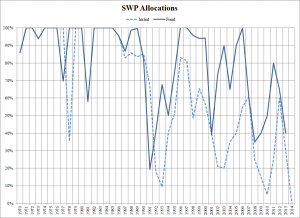 The reasonable prospect of a zero water allocation means that it makes no sense to discuss SWP supply reliability.  Instead, it is time to consider a set of closely related questions:

Hydrowonk uses the same framework the Department of Water Resources uses to analyze the economic cost of municipal water shortages avoided by the proposed Bay Delta Conservation Plan (“BDCP”).  DWR has completed an updated analysis of the deliverability of the SWP project as part of its analysis of the BDCP.  The table below shows the results for the existing conveyance—High Delta Outflow Scenario.  Ninety-nine percent of the time, the SWP allocation will exceed 12%.  About half the time, the SWP Allocation will exceed 41%.  The minimum allocation is 7.2% and the maximum allocation is 91%.

Note: DWR does not publish its schedule, so I read off a chart.  Therefore, the information in the above table would not exactly coincide with DWR’s analysis.

Hydrowonk developed a SWP Water Shortage Model to analyze the economic costs of relying on the SWP for a new real estate development.  This example is relevant for California because many water agencies are using the SWP as a benchmark to assess the adequacy of water supplies for new real estate developments.  Recognizing that the SWP contract is not fully reliable, agencies require more than one acre foot of SWP contract amount to meet an acre foot of a new development’s water demand.  Generally speaking, if the average water allocation of the SWP was 60%, a developer would need 1.7 acre feet of SWP contracts (1.7 ≈ 1/.6) per acre foot of water demand.

Techno wonk alert: Expected costs of water shortages is calculated by a 10,000-iteration Monte Carlo study using the continuous form of a probability distribution based on the table above for SWP water allocations.

The expected SWP water allocation is 41.45%.  Therefore, the standard practice of water agencies would mean that a new real estate development project must dedicate about 2.5 of SWP contract amounts per acre foot of water demand—actually 2.41(= 1/.4145 ) for those interested in finer precision. 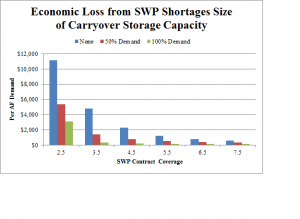 Expected water shortage costs can be reduced by greater SWP Contract Coverage and more carryover storage.  Assuming that expected cost of water shortages below $600/AF of water demand were acceptable, there are different pathways:

SWP Contract Coverage without carryover storage is a fool’s errand.  When water allocations are zero, current year water supply is nothing regardless of the size of SWP Contract Coverage.  Therefore, carryover storage is necessary to avoid catastrophic water shortages.  These are low probability events, on the order of a 100-year flood (see chart). 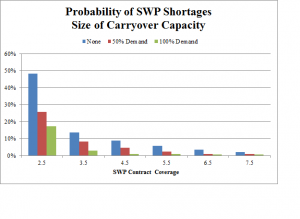 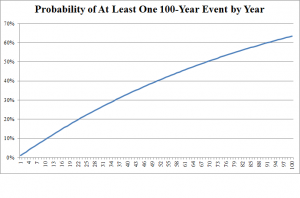 Hydrowonk doubts that the California economy can grow or even maintain itself in the face of this time profile of risks of economic catastrophe.  The metric expected economic cost of water shortages masks the water supply lottery in California. 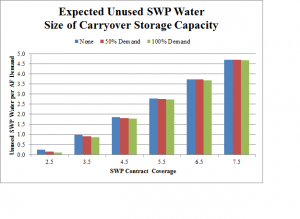 From an economics perspective, there are two options to put the “unused water” to work.  Expand carryover capacity.  However, few areas have local carryover capacity equal to annual water demands.  This leads us to the second option—transfer water to a third party.

Class 1 would equal a fraction of the current Table A contract amounts.  What fraction?  A SWP Contract Coverage of 5.5 per AF of water demand puts expected economic costs from water shortages below $500/AF with some carryover storage and the probability of a water shortage on the order of 1% (see above charts).  So, the SWP project could support water demands equal to 18.2% ( ≈ 1/5.5) of total contract amounts.  So, Class 1 contract amount would represent a pro-rata claim on the first 760,000 AF of available water in any year.  Class 2 contract amounts would represent a pro-rata claim on the amount of SWP water available, if any, in excess of 760,000 AF in a year.

While I was not in the business when the SWP was put together, the lack of reliability of SWP supplies today was probably not anticipated.  The structure of SWP contracts and operations used tools suited for the circumstances anticipated.  The variability of SWP supplies and the lack of reliability today challenge California’s water industry.  In this “new world,”

Status quo is not sustainable.  This year’s initial allocations for the SWP and the federal Central Valley Project has revealed that the “emperor has no clothes.”  So improve the risk management of these projects but accept that they are not reliable.  That means expanding the scope of one’s concept of water sources for water systems.  Failure to act effectively will have consequences: