As the 2014 midterm elections approach, many state and local governments will make key decisions on water policies. In Rod Smith’s last Post, he discussed the issues surrounding the proposed water bond in California. (To make or view predictions on the California Water Bonds, visit the Stratecon Water Policy Marketplace).  In other states, water resources issues are playing key roles in the legislative and gubernatorial elections. In this piece, I will focus on how water issues pertaining to both agriculture and fracking are playing into the mid-term elections in Nebraska.

But first a bit of background. It is no secret that Nebraska is a vital part of the United States’ bread basket. While California’s exceptional drought conditions have grabbed the headlines in recent months, other places in the country including Nebraska are facing drought conditions. Please see the graphics below for the US Drought Monitor’s most recent drought maps for both the United States and Nebraska. As you can see from the maps, Northern Texas, the panhandle of Oklahoma, Kansas, Eastern Colorado and Southwestern Nebraska are facing the worst drought conditions in the Midwest. Nebraska received some rains during April to help reduce the effects of the drought. But according to an Article from an ABC affiliate in Lincoln, NE, farmers face a catch-22 from the rains: If farmers do not get more rain, there will likely not be enough water for their crops. If the state gets more rain, the cooler temperatures that accompany the rains will make it hard for the crops to grow. 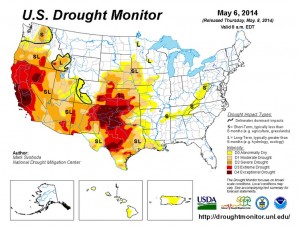 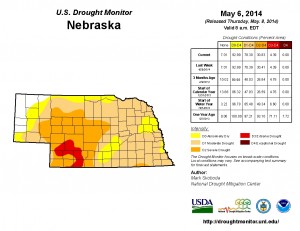 Besides the drought and agriculture, Nebraska faces a man-made demand on the state’s limited water resources: fracking. A few articles on our blog have touched on the issue. When we think of fracking, we often think of the larger shale fields in states such as Texas, North Dakota and Pennsylvania. As drillers discovered productive oil fields in nearby Eastern Colorado, they quickly looked to Nebraska as an untapped resource. In 2013, Nebraska produced 3 million barrels of oil, an 11% increase from the year before. The oil production figures in the state may be small, but Nebraskans are debating the same issues that many states with fracking operations face – namely the depletion and contamination of groundwater resources in areas where fracking is prevalent. Since fracking is a relatively small and new industry in Nebraska, there are much fewer regulations on fracking wells than in states such as Pennsylvania or Colorado. However, the regulatory environment in Nebraska towards fracking is beginning to change.

Last year, the Nebraska Legislature began a series of hearings on how it would regulate the fracking industry. The hearings received input from a variety of organizations including the Nebraska Wildlife Federation and the Nebraska Oil and Gas Commission. This year at the end of the hearings, State Senator Norman Wallman introduced LB 635. According to News Net Nebraska, the bill will require drillers that use fracking to release gas to:

Senator Wallman introduced LB 635 earlier this month, so we do not yet know the outcome. However, with the mid-term elections office looming, water issues in the state will continue to sway politics.

Let’s start out with the Senate race in Nebraska. This past Tuesday, Republican Ben Sasse and Democrat Dave Domina won their respective primaries for the US Senate election in November. Since Nebraska is a Republican-leaning state, most polls expect that Ben Sasse will be the presumptive favorite for the Senate seat in Nebraska. As of late, he has gotten some high-profile support from the likes of Sarah Palin, Senator Ted Cruz, The Club for Growth and the Senate Conservatives Fund. But some of his endorsements may cause derision and a conflict of interest for him. In particular, the Farm Bill likely will be divisive for his supporters.  The Nebraska Farm Bureau endorsed his candidacy and the Farm Bill, but The Club for Growth has gone on the record opposing the legislation.

He will also likely be torn on the issue of fracking and how it affects both water quality and supply. Drilling companies can be at odds with the needs of the farming community when it comes to water resources. In the Issues Section of his campaign website, Mr. Sasse supports the Keystone Pipeline and the expansion of US oil and natural gas production. He also opposes further regulations related to the Federal Clean Water Act. In his discussion of agriculture issues facing Nebraska, he points out that a reliable water supply is fundamentally important to farmers in the state. Going forward, these two interests may pull him in opposite directions as farming and oil fight for limited water resources.

Water issues are also shaping the Governor’s race in Nebraska. Pete Ricketts won the Republican nomination for Governor on Tuesday. Like Senate hopeful Ben Sasse, Ricketts also received high-profile endorsements from Sarah Palin and Ted Cruz. During his campaign, he built his agricultural coalition and acknowledged the importance of this industry to the state. He focused on campaign stops in western and central agricultural communities and made sure he got the message out about his support of the farming industry. Agriculture is the backbone of the state’s economy,” Ricketts said. “It’s the single biggest industry in the state. It’s important for the governor to provide leadership on everything from water policy to opening up new markets to promoting value-added agriculture.”

As you can see, water resources in Nebraska are vital to the state’s economy for both agriculture and energy. The state’s primary winners have shown their support for both of these industries in Nebraska, but in the end these industries may not be the best of friends. Agriculture and energy represent competing claims on limited water resources. Further, as we have already seen from candidates such as Ben Sasse, they are wary of further regulations stemming from the US Clean Water Act. However, farming relies on both a reliable and clean water supply to support crops.  At some point, these two competing claims may pull these candidates in opposite directions. Talk on the campaign trail is cheap. It will be interesting to see how they respond when they have to make the tough decisions on these issues.