While we here in California still face one of the worst droughts in our state’s history, some areas of the Western United States are enjoying the beginning of a reprieve from exceptional drought conditions. In particular, parts of Texas faced severe drought conditions over the last few years. Increased storms and precipitation in these areas of late has reduced the drought in these states. But is everything fixed with the rains these areas have received? The answer to that question unfortunately is no. While these areas have received rain to help alleviate drought conditions, Texas must also deal with the longer-term challenge of groundwater depletion that the drought caused. Hopefully California can use the case of Texas for how it will have to handle the challenges of water management after a drought.

For the last two years, some parts of Texas experienced similar drought conditions that California is currently experiencing. The same weather patterns that brought little rains and scorching temperatures to California brought similar weather to the Plains States, Oklahoma and Texas. Some very welcome changes to the weather and some good soaking rains changed the fortunes of Texas in the last few months. As you can see from the latest US Drought Monitor map below, Texas still has some areas of extreme and exceptional drought. Unlike California though, the areas of extreme drought in Texas are getting smaller, not bigger. Three months ago, extreme or exceptional drought covered 32.81% of Texas. Currently, that figure dropped to 16.23%. The Climate Prediction Center predicts that much of Central Texas will be drought-free by the end of the year. However, the end of the drought does not mean that the lingering effects of the drought will be alleviated. Texas will still have to address the challenge of groundwater depletion that the most recent drought caused.

The Edwards Aquifer that provides water to the San Antonio area is a case-in-point for the challenges that Texas still faces in regards to the drought. Despite the alleviation of some drought conditions in the Lone Star State, water levels in key aquifers continue to fall. The Edwards Aquifer Authority reduced pumping by 40% after water levels in the aquifer reached critically low levels. Specifically, the J-17 Monitoring Well dipped below 630 feet below sea level, causing Stage IV water cuts. Stage IV restrictions cut the amount of water that municipalities and farming interests can pump out of the aquifer by 40%. These same pumpers have already faced Stage III pumping restrictions since April 10th of this year when the Edwards Aquifer Authority cut permitted pumping by 35%. With little new rain in the forecast and continued summer heat, officials warn that these restrictions may not abate soon. 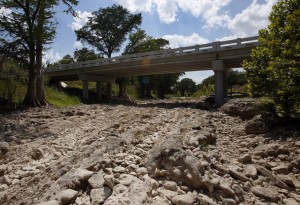 As this example shows, the lingering effects of drought take a long time to recover. While the weather in Texas has slowly helped to move the state out of a severe water crisis, the challenges the state faces are by no means over. With the lack of rainwater, Texas like many other states relied on groundwater pumping to provide water supplies. However, groundwater pumping can only provide so much water. According to a Groundwater Recharge Study that the UT Austin Bureau of Economic Geology authored, natural groundwater recharge in Texas can take hundreds to thousands of years, depending on soil, geologic and climate conditions. As California is learning, groundwater is a resource that can be depleted very easily but is hard to build back up quickly.

Unfortunately, the drought in California is showing no signs yet of abating. But hopefully in the near future a change in weather patterns will help alleviate the drought that is gripping this state. As we can see from the examples in Texas, water supply challenges do not disappear simply because rain alleviates some of the drought conditions. Many long-term forecasts predict much drier potential conditions in the Western United States over the next few years. When the drought lifts in these areas, we cannot just go back to using water resources inefficiently. The excess water we get in a rainy season is a savings account for the inevitable next drought. Unfortunately, in some instances California forgets this lesson quickly. 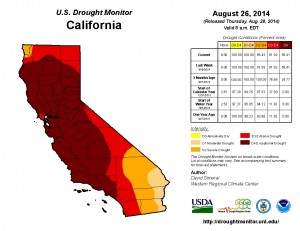 Consider, for example, the actions that the Santa Clara Valley Water District (SCVWD) took in 2009 to try to curb a severe drought. The SCVWD serves the entire Silicon Valley, including the cities in which tech titans Apple, Google, Cisco and many others call home. In an effort to make its citizens conserve water after three years of severe drought, the water district tried to enact a “mandatory” 15% water usage reduction for every citizen. The water district quickly found out how little power it had to force citizens to conserve. The district had no legal authority to raise rates on water without the consent of the people, and it could not force the retailers to which it sold water to follow the rationing “mandate”. In an attempt to coax the citizens into considering water rationing, the district spent $1 million of taxpayer dollars in a public affairs outreach program on the importance of rationing water in times of drought.

The region survived the water crisis, but the district had a short memory in remembering the importance of conserving water regardless of the supply. In 2010 the drought finally broke when California experienced an above-average snowfall. The SCVWD staff recommended keeping the water rationing measures in place, but the elected Board of Directors decided to lift the restrictions in a 5-2 vote. According to a June 16th, 2010 San Jose Mercury Newsarticle, the Board worried that the population would “go back to its old ways” of using unlimited amounts of water, but they could not force rationing on the population in times of plenty. One of the water retailers in the region explained had an intriguing explanation as to why the Board rejected the mandatory water rationing.  “Our reservoirs are as full as we can let them get,” said Charles Hardy, a spokesman for the East Bay Municipal Utility District, which serves 1.3 million people. “Our board basically said if there’s no reason for restrictions, why are you going to ask people to conserve? Because when you really need them to conserve you want them to conserve.” 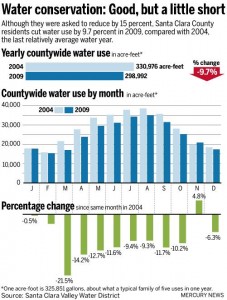 As the chart above shows, the water users in the SCVWD service area reduced water usage by about 10% during the time that District officials urged them to cut consumption. However, without the urgency to conserve, it is easy to go back to former water use patterns. It is incumbent for our elected officials and water managers to educate the public about the long-term supply challenges that the Western US faces and that water may not always be abundant.

Further, the state must continue to focus fully on creating more water storage facilities to take advantage of rainy seasons. Think of water storage like a savings account. Increased water storage will allow us to save more water for the next drought and will not make the next drought as costly on farms and businesses in the state. Proactive water storage takes advantage of the water supply that Mother Nature gives us that would otherwise be lost in a rainy year. If we do not have adequate storage, excess water that falls on the state in rainy years eventually finds its way back to the Pacific Ocean, and no one will get to use this water. Water storage is the only reliable way that California can build a drought-proof water supply. When we get the break in the drought that we are all hoping for, water storage can help us plan better for the next drought that will unfortunately come inevitably.

2 thoughts on “The Aftermath of Drought in Texas”