With a third and extreme year of drought, how will future hydrologic conditions compare to current ones? There are two strands of thought suggesting a challenging future:

The California Department of Water Resources (“DWR”) recently released a draft Final Report Klamath/San Joaquin/Sacramento Hydroclimatic Reconstructions from Tree Rings, http://journalofwater.com/jow/tree-ring-studies-show-drought-is-recurring-event-in-california/.   I cracked open the study expecting to find data at least supporting the first proposition above—the 20th century was an unusually wet period.  This expectation was based on my experience with the Colorado River.

Boy, was I wrong. The annual unimpaired runoff of the Sacramento River Four River Index averaged 18.3 million acre-feet from the year 900 through 2012 — the period that the DWR study reconstructed unimpaired runoff from tree rings (see figure).  Reflecting the fickleness of Mother Nature, there is a wide variability in annual flows.  What surprised me was that the 100-year moving average has been stable for almost the seven plus centuries of data. It is difficult to find any footprint of climate change in this chart. 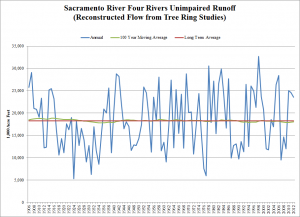 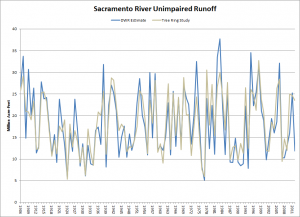 What This All Means for California’s Water Supplies?

California is in the third consecutive year of below normal years. Based on tree-ring data, there is a significant risk that there may be a few more years of severe hydrologic conditions ahead.  The implications for management of water storage are straight-forward.  Taking water from storage today to avoid shortages now may become a source of regret in a couple of years.