Just how bad has the drought gotten in California? A few interesting articles last week crossed the wires about how water thefts are happening in places where you would least expect it. In Poway, the Volunteer Fire Department allegedly stole 10,000 gallons of water from Poway fire hydrants to fill up dry tanks that a Fire Department Board of Directors’ friend owned. In Los Gatos, the police removed a pipeline that regulators say a nudist colony was illegally using to divert water from the protected Hendry’s Creek. Both of these stories show just how desperate citizens, businesses and farmers are getting for water supplies. However, as California fights through the worst drought in recent history, water supply will continue to face more restrictions as the state plans to adopt the newly-passed groundwater legislation that Governor Brown just signed. There is a lot of speculation as to how the new groundwater legislation will be implemented and what will happen to groundwater supplies before the groundwater sustainability plans go into effect in 2020. In this wrap-up piece, I will look at how the legislation will be implemented, and the potential implications this legislation has for end users going forward. 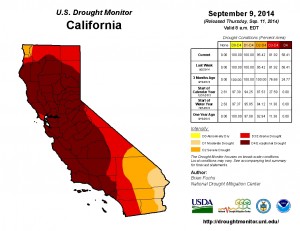 The Implementation of CA Groundwater Legislation

As I mentioned in my Post last week, until the passage of the new groundwater legislation, California was the only Western state to have no statewide regulations on groundwater pumping. In unadjudicated basins in California, overliers (land owners above the groundwater aquifer) had no restrictions on the amount of groundwater they could pump. The unrestricted access to groundwater has saved the farming industry in the state. In more “normal” hydrologic years, farmers generally rely on rainwater and surface water diversions to water their crops. The new Groundwater Legislation will change how farmers and municipalities can use groundwater. By 2017, the California State Water Resources Control Board will identify the medium and high priority basins in the state. By 2020, these basins will have to create a groundwater sustainability plan to establish rules to manage groundwater use. Under the plan, each basin would create a governing body that would oversee the management of the basin. For the first time in many areas of California, this governing agency will have the ability to tell private well owners when and how much water they can pump. If the basin’s stakeholders do not elect a governing body to preside over the basin, the State Water Resources Control Board can step in.  While much has been written about the passage of this legislation, I believe the really interesting story lies in what might happen both before and after these groundwater sustainability plans are implemented. I will now address some of these potential challenges going forward.

What Happens Between now and When the New Groundwater Sustainability Plans go Into Effect?

Now that Governor Brown signed the historic groundwater legislation into law, there is no question that medium and high priority basins will have to implement water sustainability plans by 2020. The question however remains: what will happen with groundwater management until then? There is a fair amount of debate over this issue. On the one hand, the state as a whole is moving towards more stringent groundwater pumping oversight with the passage of this new legislation. On the other hand, these sustainability plans do not have to be in place until 2020, and the medium and high priority basins do not have to reach their sustainability targets until 2040. So as you may imagine, there is much debate over what groundwater regulations will get implemented in the interim years. There is much at stake over the outcome of this debate.

Farming interests, for example in general want to make sure that they will continue to have access to groundwater both before and after the implementation of the groundwater legislation. Many farmers this year only have access to groundwater, as surface water supplies from the State Water Project and Central Valley Project have been reduced almost to nothing. The effects of the drought on growers of permanent crops such as almonds are particularly concerning. The Turlock Journal reports that in an annual survey of California almond growers, 62% of almond operations in the state utilize surface water for their operations when they have access to this source. Even more telling, the survey determined that producers across the state either plan to or already have removed about 38% of their total almond acreage because of a lack of water supply or water quality.

As you can see, clearly issues remain regarding how municipalities will address groundwater shortages before the implementation of the legislation. It appears that there is no “one size fits all” approach across the state to the management of groundwater before and after the implementation. The water and irrigation districts wanted to retain local control of their basins after the passage of the legislation. Even still, there will be a tug-of-war between farmers, municipalities, environmental groups and other end users who will fight over very limited water resources. We are already seeing some municipalities take action on groundwater sustainability before the implementation of the new legislation. In Glenn County, the Oroville News reports that the Board of Supervisors is considering a moratorium on new well permits in areas of the County experiencing the worst drought conditions until a groundwater management plan is put in place. Supervisor Leigh McDaniel, who pushed for the moratorium, argues that the severe drought is leaving cities and counties with no choice but to tighten regulations on groundwater pumping. He said, “This is a historical time. This is a historical drought. [We have to] take on the role of managing groundwater. The state has now catapulted the county into this role as it prepares legislation on groundwater management.”

Indeed, many areas across the state are feeling the pressure to act on groundwater regulation before the new legislation actually goes into effect. But farmers that rely on groundwater as a “lifeline of last resort” in severe droughts like this one will want to keep as many options open as possible to keep tapping this resource. In the end, it is uncertain how each local jurisdiction will implement and manage groundwater both before and after the implementation of the new legislation. But we can be sure that the debate over how much groundwater use is sustainable will continue to rage.