This summer, a CNN contributor named John Sutter traveled the entire length of California’s 417-mile San Joaquin River that American Rivers named the country’s “most endangered river”. During his journey from the upper reaches of the Sierra Nevada to the famous Golden Gate Bridge, Sutter saw the river in its many different forms. He saw the rapids, dams, farms, and water diversion points for one of the most important water supplies in California. However, what struck me most about his trip was that although he planned to use a kayak for (most of) the trip, the middle section of the river regularly runs dry. In a year of severe drought like this, the San Joaquin runs dry for about 60 miles (see the map below). The current state of the river is a far cry from the 1850s when riverboats regularly traversed its waters to bring passengers from the coast inland and vice versa. 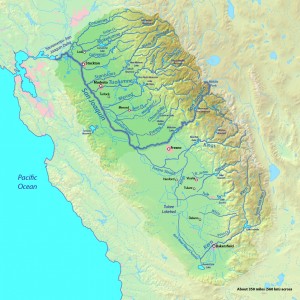 I bring this example up because despite the fact that the San Joaquin runs dry for a considerable stretch, the River is still considered part of the “navigable waters” of the United States. As such, a host of regulations including the Clean Water Act and Endangered Species Act govern this and a plethora of rivers across the United States. Earlier this year, the Environmental Protection Agency (EPA), in conjunction with the US Army Corps of Engineers (ACE) proposed revised language to these rules that determine what waterways should be under their jurisdiction. The EPA and USACE are currently reviewing comments from interested parties on these changes, and as you can imagine there are strong opinions on both sides. Farm groups, developers, and natural resource producers are among the groups opposing the proposed changes, arguing that the new regulations massively overstep the bounds and intent of the Clean Water Act. The House of Representatives also recently passed a bill to prevent the EPA from implementing the proposed changes.  Environmental advocacy groups argue that the new proposed changes are not strong enough. In this piece, I will discuss some of the potential implications to affected parties if the EPA adopts this new language.

Over What Waters Does the US EPA Have Jurisdiction?

Since Congress passed the Clean Water Act in 1972, the US EPA has had jurisdiction to enforce a host of rules including but not limited to the discharge of pollutants into rivers, and farming and construction near rivers and streams where the EPA has jurisdiction. Without getting too deep into legal definitions, the EPA has jurisdiction over “the navigable waters of the United States”. The Clean Water Act’s regulations apply to all of these jurisdictional waters, and the EPA enforces these regulations. In contrast, the waters outside of the EPA’s jurisdiction do not have the same protections under the Clean Water Act. The general definition of the term may seem straightforward, but the way that the EPA interprets the definition is anything but straightforward. According to the Cornell Law Dictionary, the “navigable waters of the United States” is:

Navigable waters of the United States are those waters that are subject to the ebb and flow of the tide and/or are presently used, or have been used in the past, or may be susceptible for use to transport interstate or foreign commerce. A determination of navigability, once made, applies laterally over the entire surface of the waterbody, and is not extinguished by later actions or events which impede or destroy navigable capacity.

What is important to remember here is that once a certain river or stream is considered “navigable waters,” the determination remains on that body of water even if the river is no longer “navigable.” So for example, the San Joaquin now has a 60-mile dry stretch and certainly is no longer “navigable” in those areas. However, construction and agriculture along the river still have to abide by the EPA’s regulations related to the Clean Water Act.

(no change from current rules);

rules, but the term “tributary” is newly and broadly defined in the proposal); and

categories (by including all adjacent waters—not simply adjacent wetlands, as is

finding these waters categorically jurisdictional; they are considered

The final proposed rule change may be the most controversial. Currently, the EPA does not have categorical jurisdiction over what is known as “other waters” of the United States. Although many types of waters fall into the “other waters” category, they may include waters that are adjacent (such as wetlands) to rivers and streams that fall under the EPA’s jurisdiction. The EPA can add these waters under their jurisdiction on a case-by-case basis. Under the new proposed rule, many of these other waters now would be under the categorical jurisdiction of the Clean Water Act. The new proposal could significantly expand the bodies of water that would be covered under the Clean Water Act. As you can imagine, the new rules have created controversy on both sides of the argument.

What are the Potential Implications for this Policy Change Going Forward?

Interested parties have until October 20th to submit a comment regarding the proposed rule changes. The proposal needed 10,000 comments to force the EPA to re-evaluate the proposal. According to the Denton Record Chronicle, the proposal received over 12,000 responses through the first week of September. Both supporters and opponents have shown strong opinions toward this issue. The EPA continues to argue that it has no intention of overstepping its bounds and adding new regulations related to the Clean Water Act. Robert Daguillard, spokesman for the EPA said, “The intent of EPA and the Army Corps of Engineers is to protect clean water without getting in the way of farming and ranching. For example, normal farming practices including planting, plowing and harvesting have always been exempt from Clean Water Act regulations, and our proposal doesn’t change that.” However, farmers and ranchers across the US are not convinced. Farming associations from Kansas to Georgia opposed the new rules, arguing that they will impose even tougher standards on an already-regulated industry. Almost all farmers across the country are concerned that the proposed regulations will limit the amount of water they will have access to, slow down the permitting process and generally increase costs.

On the other side of the argument, environmental organizations such as the Sierra Club argue that these new regulations are sorely needed. Many bodies of water that are either non-jurisdictional or are lumped into the “other waters” category are vital to the health of rivers and streams but are afforded no protection. They argue that the rivers and streams are one ecosystem, and as such all parts of important bodies of water should be protected. Regardless of your opinion on the issue, there will certainly be interesting arguments as this new regulatory environment unfolds. There is much at stake regardless of how the EPA decides on these rules.