Oklahoma and California on paper have very different political views, but each state faces very similar issues regarding the drought.  What struck me in researching this article is how progressive Oklahoma’s ambitious Water for 2060 Bill is to tackle water sustainability in the future. In this piece, I will explore the similarities between the drought conditions in both states, both states’ response to the drought, and what both can do to plan for prolonged drought conditions in the future.

Oklahoma and California: Not as Different as you may Think

But first a bit of background. In the last four years, Oklahoma has experienced some of the worst drought since the “dustbowl” drought in the 1930s. The current spate of drought began in the fall of 2010 and lasted through 2011. While Oklahoma did receive some rainfall in the winter of 2011, the rain was not enough to alleviate the drought conditions. A wet spring in 2012 saved the wheat harvest, the largest crop in the state. But since the spring of 2012, the rain has been spotty at best. At the height of the drought in the summer of 2013 (see the graphic below), almost the entire state of Oklahoma was under either “extreme” or “exceptional” drought conditions. According to researchers at Oklahoma State University, the drought caused approximately $2 billion in economic damages to the state in 2011 and 2012. 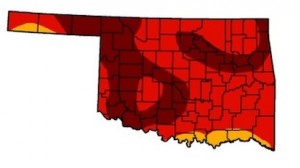 Since the summer of 2013, the drought in some parts of Oklahoma has dissipated. It has also somewhat dissipated in neighboring states such as New Mexico, Texas and Colorado. As you can see from the US Drought Monitor map below, much of the extreme and exceptional drought that covered the state has disappeared, leaving smaller pockets of extreme and exceptional drought in parts of Southern and Western Oklahoma.  However, officials cannot sound the “all clear” in Oklahoma yet. The now 4-year old drought has left surface reservoirs at critically low levels. State Impact Oklahoma estimates that the Altus-Lugert Lake is at 10% of capacity. The Lawton Constitution reports that if weather conditions continue at their current rate, Waurika Lake (which supplies water to Lawton, Duncan, Walters, Temple, Comanche and Waurika) could be dry by July, 2016. 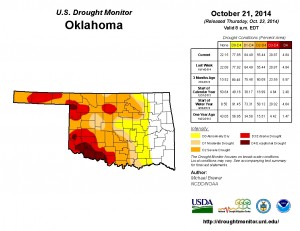 While many of the areas in Oklahoma have seen improvements in drought conditions, the state continues to face an uphill battle in finding adequate water resources for its citizens, farms and businesses. In this context, Oklahoma has many similarities to the plight of California. Both states project that population increases will put increased strains on water supplies. The Oklahoma Comprehensive Water Plan projects that water demands will increase 28% from current levels by 2060. Like California, the single largest user of water in the state is the agricultural community. The Oklahoma Water Resources Board determined that in 2007, crop irrigation and livestock watering used 46% of the state’s annual water supply. Both states’ agricultural communities rely on groundwater to provide supply, particularly when drought reduces surface water supplies. The same report from the OWRB estimates that groundwater provides about 73% of the water supply for agriculture.  Finally, like California, forecasters project that Oklahoma will face more severe and longer droughts and more severe floods as climate change affects weather patterns across the globe. 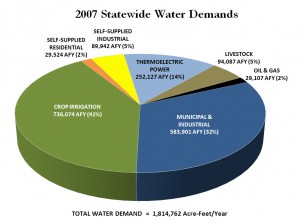 It would be understandable to assume that because of the states’ very different politics in general that their policy responses to long-term drought would be markedly different. The fact is, however, that Oklahoma has created a very progressive set of policies to address the drought in the state. In 2012, Oklahoma passed the Water for 2060 Act. It was the first state in the nation to establish a goal of using no more freshwater in 2060 than the state uses in 2012. As I mentioned earlier, the state projects that its water demand will be 28% higher in 2060. So how will they achieve this goal? The bill supports a host of measures to both tap supply and increase conservation. These measures include:

It is very interesting to see that while Oklahoma and California have very different political views in general, that both states are taking very similar approaches to finding solutions to long-term drought challenges. Both the recent groundwater legislation and Proposition 1 on the ballot in California in November support many of these same solutions to drought prevention.

Unfortunately, the most recent Drought Monitor shows no improvement in California’s conditions, unlike the somewhat improving conditions in Oklahoma over the last two years. But Oklahoma is not out of the woods yet. Both states will likely need a few seasons of above average rainfall to bring both aquifers and surface water supplies back from critically low levels. However, both states are taking steps towards water conservation that will help to mitigate the challenges each state will face when the next drought inevitably strikes.