Sitting before my computer at sundown November 3rd, thinking about whether California voters will pass the 2014 water bond?  Hydrowonk believes the outcome depends on the balance among three factors: will the drought and political leadership exerted by Governor Brown overcome the drag of increasing debt burdens on voter support for water bonds? According to the wisdom of the Stratecon Water Policy Marketplace, the answer is yes. This market now predicts that the chance of the water bond passing is 57%.  Given the trend in voter support of water bonds and California debt loads, the passage of the water bond would be a remarkable achievement.

The Drag of Increasing Debt Burdens 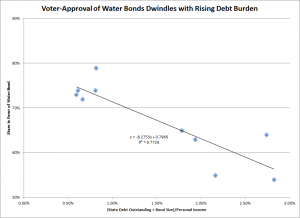 Given California’s rising debt burden, Hydrowonk’s water bond model predicts that a $7.1 billion water bond in 2014 would have an expected vote share of 44.2%. Taking into account the statistical variability in this forecast, the chance of the water bond passing is 18%.  In other words, Vegas would put 5/1 odds against Prop 1 passing.

The current California drought has commandeered headlines. Central Valley agriculture has been laid to waste with unprecedented interruptions in state and federal project water deliveries.  Urban water users are urged to cutback use.  Water providers have imposed water use restrictions.  (On a personal note, Hydrowonk just closed on a house whose water provider sent an avalanche of material on water budgets and water restrictions.)  Has the drought escaped the notice of any voter?

When the water bond was the $11.14 billion blow-out passed by the Legislature in 2009, recent polling of voters suggested a water bond failure. By spring, polls showed that a trimmed down bond would yield more support (consistent with the drag of increasing debt burden discussed above).  Yet, the “up-tick” in the polls still left the outcome in doubt.

The Legislature struggled throughout most of the summer with proposals that represented, at best, modest cutbacks in the 2009 bond. Interest groups protected their individual flanks.  The sum of the parts still totaled to a hefty price tag.  Prospects of voters passing the water bond remained bleak.

Governor Brown changed the political dynamic with leadership. He told the Legislature that he would campaign against a water bond if the Legislature did not cut the size significantly.  He put the bar as low as $6 billion, but a political compromise was secured at $7.1 billion in new bonds and a reassignment of $425 million from unspent monies from earlier bond issues, some decades ago.

The most critical aspect of the water bond was the unanimous vote in the State Senate and almost unanimous vote in the Assembly. A grand coalition was formed—Democrats and Republicans, northern California with central and southern California.  Governor Brown is on TV supporting Prop 1 (water bond) and Prop 2 (rainy day fund—is California learning from Texas?).  While there is scattered opposition, it has not hit the high-cost California media outlets.  Unlike other electoral battles in California water (remember the Peripheral Canal in 1982?), the political community is united and there is no significant regional conflict that opponents could have exploited.  If Prop 1 passes tomorrow, the political strategy behind the 2014 water bond should be heralded as political genius.

So, Hydrowonk, what will happen? Well, Hydrowonk is not smart enough to figure this out without some tools.  So, I turn to the “wisdom of crowds” represented by prediction markets.  Hydrowonk put up a water bond question in mid-August on the Stratecon Water Policy Marketplace:

“Will California voters approve the water bond authorized by the Water Quality, Supply, and Infrastructure Improvement Act of 2014 in the November 2014 election?”

Anyone can join the marketplace and express their opinions about whether the probability of Prop 1 passing is higher or lower than currently determined in Stratecon’s water policy market. A total of 24 predictions have been made as of this post (see chart for price history and volume).

The Stratecon Water Policy Marketplace allows participants to express anonymous views as they submit their predictions—if you like a graffiti wall. Hydrowonk will defer to your takeaways, although my favorite one was a post on Halloween (can you guess which one?).

The prospect for the water bond certainly looks much brighter than a year ago. Undoubtedly, the drought helped.  Based on an analysis of historical trends in voting and debt burdens, the chance of Prop 1 passing is 18%.  Tonight, Stratecon’s Water Policy Marketplace predicts that Prop 1’s probability of passing is 57%.  Remarkable testimony to how this year is different from historical conditions.

Hydrowonk has a nagging thought. The critical factor was that the 2014 water bond included $2.7 billion for water storage. If the water bond did not have enough money for storage, the bond campaign would have faced a split California, political establishment and user community. Support in the Central Valley and other inland counties would have probably turned into opposition. As you look at the electoral map tomorrow night, focus on the fact that California is a combination of “blue counties” (San Francisco, Los Angeles, along the coast) and “red counties” inland areas. Voting on a controversial water bond would probably have followed the “blue/red” divide in California.