The fourth year of a statewide drought in California has brought some drastic changes to how citizens view and use water in the Golden State. First, both citizens and businesses are becoming more aware of their water use. State and local efforts to quantify how much water individual communities use have garnered recent media attention. Earlier this week, the California State Water Resources Control Board released data showing per capita water use by city across the state. The data showed that the tony cities of Rancho Santa Fe and Beverly Hills had some of the highest per capita water use despite the historic drought the state is facing. Second, the general public’s awareness of the importance of water issues to the state helped to get ballot measures like Proposition 1 across the finish line and into law despite two prior attempts to get a larger-sized measure on the ballot.

In the aftermath of the historic passage of both Proposition 1 and the groundwater legislation earlier this year, we should step back and determine what these measures both can and cannot do for the State of California. In this piece I will review these issues, and look at water planning in the state as we potentially move into the fourth year of drought in California.

Prop. 1 and Groundwater Regulation – What Will They do for California? 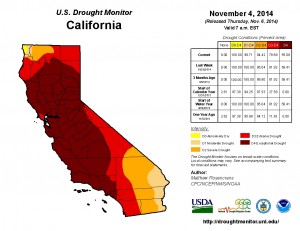 In this backdrop, Californians voted to pass Proposition 1 with approximately 2/3rds support. As I mentioned in an earlier piece, legislators have twice tried to get larger water bonds onto the ballot, but a lack of political will and the public perception that earlier bond proposals had too many earmarks scuttled earlier attempts.

Now that both the groundwater legislation and Proposition 1 are on the books, what will they do for California? First and most importantly, both the groundwater legislation and Proposition 1 will allow California, over the long-term, to plan better for sustained drought conditions. We have all seen the dramatic before and after photos of some of California’s largest reservoirs at record low levels. Increased surface and groundwater storage is our most important tool to combat long-term drought. Unfortunately, our current water storage facilities are inadequate to address the drought we are facing. Major reservoirs such as Lake Shasta and Lake Oroville are at about a quarter of total capacity. Under Proposition 1, $2.7 billion will go towards increasing water storage capacity. A further $725 million will go towards water recycling projects, an increasingly important source of water recharge for municipalities. These projects will help to build up water reserves in times of plentiful rainfall to help us have reliable water supplies even in prolonged periods of drought.

Second, as a subset of the long-term planning, both the groundwater legislation and Prop. 1 will put a further onus on new development to prove reliable water supplies as part of the entitlement process. Currently, Senate Bills 610 and 221 mandate that any new proposed project over 500 equivalent dwelling units prepare a water supply availability assessment. This assessment becomes part of the project’s environmental impact report (EIR), and is considered along with the EIR in its entirety during the project’s permitting process.

The new groundwater legislation takes water and land use planning a step further. AB 1739 has a direct connection to land use planning. First, the legislation in Section 65352.5 states that “it is vital that there be close coordination and consultation between California’s water supply or management agencies and California’s land use approval agencies to ensure that proper water supply and management planning occurs to accommodate projects that will result in increased demands on water supplies or impact water resource management.” Also, prior to the adoption or amendment of a general plan, the agency making the general plan update must “review and consider” the groundwater management plan before proceeding.

This new regulation will likely add more scrutiny to real estate development projects going forward. Late last month, I attended a workshop that the County of San Bernardino hosted to update the public on the new water legislation and the water element of the County’s Vision document. The presenters mentioned that the new regulations would likely lead to increased coordination between local land use authorities and water agencies when determining the efficacy of new projects.

Prop. 1 and Groundwater Regulation – What Will They not do for California?

There are many positive things that these regulations can achieve. However, these laws are not a panacea that will cure all the ills of the Western United States’ taxed water system. First, the new reservoirs and infrastructure that we will build with Proposition 1 money will not change the climate patterns affecting the West. The new infrastructure will allow us to manage the water resources we have more effectively. It will give us the tools to store more water in times of plentiful rainfall to get us through the times of drought that we will undoubtedly experience again. But it will not create a “drought-proof” water supply. When we get a rainy winter and our reservoirs begin to fill back up, we can’t go back to our old habits of forgetting about water conservation. Recent research contends that longer periods of drought may be the norm rather than the exception in California as climate change continues to affect the weather patterns over our state. Jay Lund, Director of the UC Davis Center for Watershed Sciences recently modeled the effects of a 72 year mega-drought on the state. His research concluded that while agriculture, wetlands and fish populations would likely bear the brunt of the negative effects in this scenario, we could get through such a long-term drought with prudent planning. He said, “If we manage the situation well, the whole state would be in pain, but the impacts would be devastating only for some local areas.”

I believe this is the most important point of the new regulations – The new regulations cannot force us to plan water usage properly and make the delicate decisions as to whom should get limited water supplies. It is up to our political, business and community leaders to use the tools effectively that the groundwater legislation and Proposition 1 give us to plan for prolonged periods of drought. When we need to conserve water, we have the ability to do so. Bloomberg reported that in September, California reduced water usage by 10.3% compared to September, 2013. It is up to us to continue this trend. There are many things that the new water regulations can do for California, and many that they can’t. They can provide us with the tools necessary to handle droughts better in the future. It remains up to us to implement those tools effectively and use our new resources in the most efficient manner possible.