We have all read about the negative effects of the drought on businesses and citizens. Farmers left an estimated 400,000 to 800,000 acres of land fallow during the year, causing approximately $1.7 billion in economic damages. Despite all of the damages, I did find one industry that is actually relishing in the drought: For all you California and Oregon wine lovers, you might want to stock up on the 2014 vintage.  The Wall Street Journal reports that growers in California and Oregon believe that the 2014 vintage may be some of the best wines in the last few years. Unlike some other important crops in California, grape vines are in general very drought tolerant. In some areas, grape vines receive little to no irrigation. Also, the hot, dry weather naturally reduced grape yields. The grapes that did grow have much more concentrated sugars, leading to bolder flavors and better tasting wines.

While wine lovers may be rejoicing at the drought, Mother Nature has been much crueler to the wildlife that call the Western United States home. The drought has caused stress on wildlife populations ranging from ducks to salmon. The effects of the drought on wildlife have also brought on some contentious debate over the best and highest use of limited water resources. In this piece, I will look at some of the issues facing salmon populations in California that are feeling the effects of the drought. Next week, I will look at issues surrounding the protection of the Delta Smelt and will explore whether there is a happy medium between our water consumption and wildlife protection.

Undoubtedly the drought has hit California the hardest among the Western United States. Water levels in surface reservoirs, groundwater and major rivers are at historic lows. As I mentioned in the opening paragraph, farmers across the state face damages close to $2 billion. The drought has also negatively affected wildlife populations as well. In particular, wildlife officials in the Golden State are paying particular attention to the salmon and Delta Smelt populations during the historic drought.

Let’s start first with California’s salmon population. Salmon in California (depending on the species) make runs in the spring and summer to breeding grounds far upstream in some of the most important rivers in the Delta. Officials are concerned that the low water levels in the Sacramento River Delta will inhibit adult salmon from migrating up the rivers to lay eggs. As such, wildlife protection agencies have taken extraordinary measures to ensure that salmon populations do not drop precipitously during the drought.

In the spring, the US Department of Fish and Game “trucked” almost 32 million Chinook salmon smolt downstream from the hatcheries. As you can see in the picture below, officials used what looked like fuel delivery trucks to move the salmon fry. They moved the fish in this manner because they were concerned that the fry would not survive on their own with such little flow in the rivers. This fall, officials are taking even more drastic measures. They are installing “water chillers,” essentially giant refrigeration units into the waters of the hatcheries. Salmon eggs can only survive within certain temperature ranges. The hot summer and the low water levels in the rivers have pushed water temperatures up to levels that may be lethal to the salmon hatchlings. The stakes are high – if officials cannot regulate the temperature effectively and keep these fish alive, John McManus, the Executive Director of the Golden Gate Salmon Association warns that, “We are looking at potential loss of an entire generation of naturally spawning fall run.” 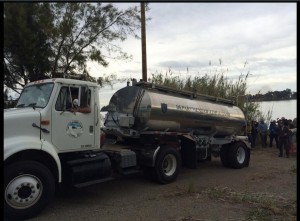 While environmental protection officials are doing everything that they can to protect the salmon population, their actions are upsetting farmers and water districts who contend that the water could be better used elsewhere. In the midst of this historic drought, we have sent water downstream and eventually to the ocean in an effort to save migrating fish populations. In October, the Bureau of Reclamation released 34,125 acre-feet of water from behind the New Melones Dam in order to help salmon and steelhead migrations. The water will run into the Stanislaus River to the Bay Delta and eventually run out to sea. In other areas, regulators have done the exact opposite, reducing stream flows and halting water transfers in an effort to keep the rivers as cool as possible for the salmon smolt. The Sacramento Bee reports that the US Bureau of Reclamation reduced the amount of water going into the American River from the Folsom and Nimbus Dams. Throughout the summer, the Bureau of Reclamation released about 1,500 CFS steadily from these dams. But in early October, they cut back those releases to about 1,050 CFS.

These decisions have real implications to the farmers and citizens that rely on water stored behind these dams and diversions from these rivers. The water released from behind the New Melones Dam could cover the needs of Manteca, Tracy, Lathrop, Ripon and Escalon for two years. The problem is that the New Melones Dam, along with many reservoirs across the Golden State are at historic lows. The New Melones Dam has a total capacity of 2,400,000 acre-feet and a historical average storage of 1,345,455 acre-feet. The current water behind the dam is at 502,670 acre-feet, or 21% of total capacity. Water conservation in the midst of the historic drought conditions is of the utmost importance, and some stakeholders are concerned that water used for the salmon migration is not the best use for this precious and limited resource. 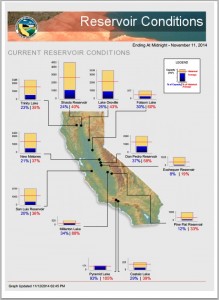 There are arguments to be made on both sides of this debate. Much like the issue of fracking and water, there are sound arguments to be made on both sides. The environmental conservationists argue that the salmon populations could face irreversible damage if we don’t do everything to save them in the midst of the drought. The salmon populations are already under stress from overfishing. If California loses a significant amount of salmon hatchlings this year, the ripple effects could be felt for years afterwards. Further, there are economic consequences if we do not save the salmon populations. Fishermen in California rely on healthy populations to support the industry.

On the other hand, water districts and farmers argue that they suffer directly as a result of the decision to release water deliberately that will flow directly to the ocean. We are now entering the fourth year of a crippling drought. Every bit of water counts as we do not know if this winter will bring the Golden State significant rains. With this in mind, farming groups and water districts argue that the laws protecting fish populations “put fish before people”. It is uncertain when the drought will abate in California. It is certain, however, that as long as our rivers are at historic lows, the debate over fish protection will continue. Many of the same arguments occur with the smaller but no less important Delta smelt. In next week’s piece, I will cover this species and further address the pros and cons of this debate.