The drought gripping the Western United States has changed many things. Up until this year, we never had a zero percent allocation for the State Water Project. The media attention on the subject of water in California, including this week’s 60 Minutes  segment on groundwater in the Central Valley, brings the issues we are facing in this state to the forefront of the general public. Despite these changes, a few things remain certain. Despite the recent rains, in the short-term, there is not enough water to satisfy all the demands of California’s water users.  As such, citizens, business leaders and elected officials have to make the hard choices over which users should get limited water supplies.

As I mentioned in my Post  last week, one of the most contentious debates over water allocation centers around the amount of water that we use for endangered species mitigation. Last week, I focused on the measures that the California Department of Fish and Game is taking to save the salmon populations in the state. This week, I will take a look at the smaller but no less contentious Delta smelt. This finger-sized fish has been the source of a series of contentious court battles and has affected the amount of water we can move through the Delta. In this piece, I will discuss the reasons behind the Delta smelt’s decline, the species’ effect on pumping in the Delta, and some recent court cases related to the fish.

The Delta Smelt is a small, finger-sized fish that is native to the Sacramento-San Joaquin River watershed in the Bay area. Despite its small size, conservation organizations argue its population is an important indicator of the health of the Delta ecosystem. The Delta smelt were once abundant in the rivers and streams that make up the Bay Delta. But smelt stocks began to deteriorate in the 1980s. Environmental groups took notice of the falling stocks and the species was listed as threatened under The Endangered Species Act in 1993.

Unfortunately, the “threatened” designation under the Endangered Species Act in 1993 did not stop the decreases in smelt stocks in the Sacramento-San Joaquin watershed. In 2007, the Center for Biological Diversity sent a petition to the California Fish and Game Commission to increase the protection on the smelt. The Center argued in the petition that at then-current rates of decline, the species may be extinct before 2030. California listed the smelt as endangered in 2010.

There are a few reasons why the smelt’s populations have declined so dramatically over the last few decades. However, the research disagrees as to how much each of these factors contributed to the decline. First, invasive species feed on the Delta smelt. These non-native species, ranging from mitten crab from Asia to bass and silversides from other parts of the United States now call the Bay Delta home. Some of these species have no natural predators and push out the native species. Some of these fish also feed on the Delta smelt. Runoff from farming operations also affects the smelt populations. However, the most controversial cause leading to the smelt’s demise is the water pumping operations in the Delta.

The effects on water pumping in the Delta

Southern California and the farmlands in the Central Valley rely on water deliveries from Northern California. As the graphic below shows, on average, 70% of the rainfall in California falls north of Sacramento. However, the population and agricultural centers south of Sacramento use 75% of the water in the state. The water that comes from the Northern part of the state must first move through the Bay Delta before the system of aqueducts move the water south. Herein lies the rub with the Delta smelt. 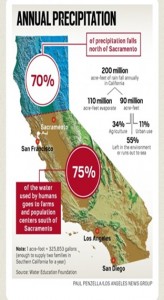 To move all this water, the State Water Project uses massive pumps to lift water from the Delta to the federal and state aqueducts that make up the State and Central Valley Projects. While moving water is beneficial for the users that rely on the water supplies, it can be detrimental to the smelt. The smelt can get caught in the pumps, and state officials have consequently stopped pumping operations in a few instances.

In late 2012 for example, the Association of California Water Agencies (ACWA) reported that the Department of Water Resources ordered a halt to Delta pumping operations because 90 smelt got caught in the system’s pumps. The number of smelt caught approached the limits of the “incidental take” levels that the State Water Project is allowed, so pumping operations ceased. ACWA estimated that during the time the pumps were not operational, we allowed about 700,000 acre feet of water to flow out to the ocean. In early 2012, we had no idea of the severity of the drought we would face. Could we use an extra 700,000 acre-feet of water in our reservoirs right now? You bet.

The pumping curtailments as well as the continued drought in the state caused more consternation between water agencies and environmental interests looking to protect endangered species. The courts heard a series of cases related to this subject. As you may imagine, many of the debates were contentious and a few cases are still moving through the system.

Court cases associated with the smelt

Volumes could be written about the court cases related to the Delta Smelt. However, I will focus on the most recent case, Stewart and Jasper Orchards vs. Jewell, et al. The courts have heard a series of cases to try to overturn the pumping restrictions in the Delta. Most of the cases revolve around the “takings clause” associated with pumping operations and the killing of endangered species. The April, 2007 edition of Water Strategist discussed how an Alameda County Superior Court judge ruled that the Harvey O. Banks Pumping Plant at the beginning of the State Water Project had to stop pumping within 60 days of the decision. The judge made this decision because the California Department of Water Resources did not have proper authorization to “take” endangered species in their operations.

A series of similar court cases have moved through the judicial system since this case. The most recent Jewell case hinges on similar arguments, but with a twist. The petitioners argue that the Endangered Species Act should take into consideration the economic impacts of cutbacks to pumping water through the Delta. The 9th Circuit Court of Appeals however sided with the environmental groups in this case, overturning a lower court’s ruling to allow increased pumping. Reuters  reports that the judges understood but were not sympathetic to the economic impacts argument that the petitioners made. Circuit Court Judge Jay Bybee said, “We recognize the enormous practical implications of this decision. But the consequences were prescribed when Congress determined that ‘these species of fish, wildlife, and plants are of esthetic, ecological, educational, historical, recreational, and scientific value to the Nation and its people.'”

The petitioners have filed paperwork to ask the US Supreme Court to hear this case. It remains to be seen if the Supreme Court will consider this case. Disagreements will remain, however, over what is the highest and best use for limited water resources in California.