After reading the California Debt and Investment Advisory Commission’s study (“CDAIC Study”) on Bay Delta Conservation Plan (“BDCP”) financing considerations and risk, State Water Project (“SWP”) contractors and (especially) Central Valley Project (“CVP”) contractors should take a fresh look at the financial realities of relying on the BDCP. Unlike the study’s discussion of BDCP affordability,  which was marred by economic flaws, the study offers a useful discussion of financing and risk that water agency board members should consider as part of their fiduciary duty in making BDCP decisions.

Water users are expected to fund $14.7 billion (2012$) of capital expenditures for the construction of capital facilities and environmental mitigation obligations. The water users are either SWP contractors or CVP contractors. The two projects differ significantly in terms of the importance of municipal water use, credit rating of water agencies, source of initial project financing and nature of contract commitments (see table). All tip in favor of SWP contractors (as a group) being financially stronger than CVP contractors (as a group).

Comparison of SWP and CVP Contractors

Source: taken from CDAIC Study for information other than share municipal water use.  That information from SWP and CVP websites

The SWP has been historically successful in the municipal bond market. As noted in the CDAIC Study, the SWP has many attractive structural features. In Hydrowonk’s opinion, the “secret sauce” is credit worthy agencies (1) are making take-or-pay payment obligations independent of the volume of water available or delivered, and (2) must step up and pay the obligations of any other water agencies in default up to 25% of their annual payment obligations. With the two largest SWP contractors (the Metropolitan Water District of Southern California and the Kern County Water Agency) having strong economic bases, the step-up obligation means that the risk of non-payment due to smaller and potentially less strong SWP contractors generating defaults on SWP bonds is not material.

The Federal government is more accommodating than the municipal bond market. CVP contracts do not have a take-or-pay obligation. Payments are based on amount of water delivered. Water rates are calculated annually to recover capital costs by 2030. In low water delivery years, actual capital payments fall short of planned repayments. The shortfall is included in the calculation of water rates in future years. The Bureau of Reclamation effectively provides a free “line of credit” to CVP contractors.

Going to the municipal bond market will be a new experience for many CVP contractors. They will not have the BOR line of credit.  They must step up and commit to firm repayments.

Westlands Water District has the largest CVP entitlement and accounts for 36.44% of the “maximum contract amount” of water delivered to CVP contractors. Under the CDAIC Study “base case”, Westlands would face a $3.74 billion BDCP debt obligation. Westlands current debt outstanding is $237 million. Is a 16-fold increase in Westlands debt sustainable?

In 2014, Westlands had 568,000 acres in production or fallowed. Therefore, a $3.67 billion BDCP debt obligation equates to $6,585 per acre. Based on land values reported by the American Society of Farm Managers and Rural Appraisers, this debt burden exceeds the current market value of cropland and represents up to 50% of the current market value of permanent croplands. In 2014, about 143,000 acres were in permanent crops. Westlands acreage in production could shrink down to one-fourth its current size.

Economic activity in Westlands has already declined since 2000 (see chart).  About 50,000 acres are fallowed annually regardless of water availability. (This represents about once a decade cropland fallowing as part of a rotational cropping plan.)  Fallowing and unharvested acreage have jumped in recent years by as much as 170,000 acres. 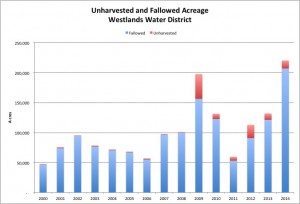 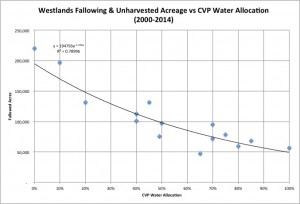 Unfortunately, the estimated BDCP water yield is just the opposite. The BDCP will mostly yield additional water in wet years and very little during dry years.   Westlands must develop a program to conjunctively use groundwater with surface water to better match the timing of new supplies with water demands.

The CDAIC Study’s discussion of project risks is by far the strongest section and most worthy of study and discussion. All risk factors suggest that investment in the BDCP face the risk of substantially higher costs and lower water yields (see table).

Construction Cost Risk. The CDAIC Study references a 2003 study of risks of “megaprojects”—mostly transportation. Cost overruns are common, on the order of 50% to 100% or more due to complexity and “failure to properly assess risks inherent in the projects.” As one signs up for the BDCP, ask yourself how big of a cost overrun are you comfortable with? Given the size and unprecedented scope of the BDCP’s tunnel project, one should be comfortable with at least a 50% cost overrun (in inflation-adjusted dollars).

Construction Delay Risk. There is already a three-year delay. Original BDCP documents anticipated a project start date in 2025. The CDAIC Study states a 2028 start date. Is this a typo or has a recent examination of the project schedule been made?

The tunnels are a large project. Construction can run into unanticipated conditions. At a practical level, the project will run a “geologic lottery.”

Litigation, as always, is a consideration. Think about litigation over the Quantification Settlement Agreement (“QSA”) implemented in 2003. The initial era of litigation is winding down, with probably only one more round of appeals by QSA opponents who have yet to have a sustained victory. As evidenced by the recent petition filed by the Imperial Irrigation District (“IID”) with the State Water Resources Control Board, lingering and significant issues (in this case Salton Sea restoration) threaten to spur another round of litigation.

There is a significant difference between the QSA and the BDCP. Implementation of the QSA for local agencies involved fallowing by IID. There was no financing of significant capital investments (other than use of state money for the lining of the All American and Coachella Canals).

For the BDCP, can $20 billion be raised from the municipal bond market in parallel with BDCP litigation? Unlike the QSA where significant capital investments are still ahead even in 2014, $20+ billion must be put into the ground out of the gate while running a litigation lottery.

The CDAIC study observes that undertaking significant habitat conservation efforts are a condition of construction permits. Anticipated state and federal spending for these efforts have not been secured. “If sufficient funding for habitat conservation is not ultimately forthcoming, the ability to operate the conveyance facility could be jeopardized.”

Hydrowonk agrees. Delay in habitat funding will hold up the project. In honor of Walter Mondale regarding public dollars, “where is the green?”

Regulatory Risk. The “BDCP’s grand bargain” is habitat conservation measures in exchange for regulatory assurances regarding the availability of water. The CDAIC study discusses “several factors (that) make a blanket assurance regarding minimum water exports from the Delta very unlikely.” The large project scope, in a complex ecosystem, in the face of uncertain and evolving science, and regulators taking an adaptive management approach all make predicting available water a challenge.

Climate Change. Global climate change is predicted to increase surface and water temperatures, but projecting precipitation is difficult. More precipitation is forecasted to increase rainfall but reduce snow. This results in earlier runoff. However, the natural processes are complex and exhibit large variability. “There is a risk that precipitation patterns evolve in a direction that differs significantly from the pattern currently anticipated.” The result would be lower water exports. While the timing in the “out years” is a mitigating factor for the CDAIC study in terms of the ability to pay bondholders, this does not change the fact that water users would have less water than anticipated from the BDCP.

We live in a risky world. Therefore, just because a project faces risk does not, in and of itself, mean the project should not be pursued. Instead, one needs to sharpen the analysis of risk and test how attractive a project looks in the face of the underlying uncertainties.

The CDAIC Study moves the discussion along by examining the implications of a best and worse case around a base case analysis of the BDCP and providing a qualitative discussion of risk factors. Modern risk assessment tools should be used to translate the “qualitative” into the “quantitative.” Only then will decision makers have a full understanding about the nature of the risks they are betting on. 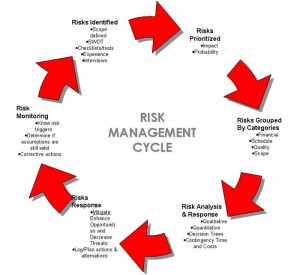 In the end, the CADC Study leaves Hydrowonk even more skeptical about the BDCP than he was before. The CDAIC affordability analysis is flawed—at best the BDCP is a marginal project. The financial considerations do not bode well for agricultural water users—at best, there will be “survival of permanent crops” and specialty, high-valued annual crops.   Significant acreage will no longer be viable.  The above list of risk factors suggest the likelihood of the downside is far greater than any upside.

When will the BDCP be reconstituted as a municipal and scaled-down agricultural water user project? Will such a project prove viable? Until we “step it up a couple of notches in risk assessment,” hard to imagine a favorable reception in capital markets.