What a difference a few weeks make. While severe drought still grips most of California, the drought may ever-so-slightly be losing its grip. Over the last few weeks, California received two large rainstorms that helped to alleviate some drought conditions. This week, more rain is on the way. AccuWeather projects that some areas of Northern California could see up to 5 inches of rain before the storm wraps up late this week. While this rain is certainly welcome news to all of us who live in California, we must also remember that adequate water storage capacity is the key to capturing the water that Mother Nature provides us.

With the passage of Proposition 1, the State of California has $2.7 billion designated for new water storage projects. In this piece, I will look at two of the major potential projects that Proposition 1 may fund. I will explore how the facilities can help to alleviate future droughts as well as the hurdles they both face in implementation and financing. 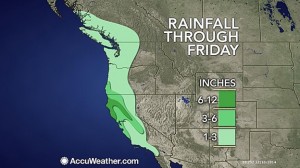 The current drought we are facing has taught us the importance of having abundant storage in California. The proposed Sites Reservoir Project located west of Colusa (see map below) could help to reach this goal. It is an off-river storage project, so no dams will be built on the Sacramento River to capture water.  According to the Department of Water Resources, the project could increase average annual water storage by 1.4 million acre-feet and supply on average 500,000 acre-feet of water per year. Supporters of the project argue that both humans and wildlife will benefit from the project’s construction. The Northern California Water Association points out that in addition to the new storage capacity, the Sites Reservoir will produce hydroelectricity when it releases water, usually in the summer months during high electricity demand. The project could also have environmental benefits. The released water could provide cold water for salmon runs and the reservoir itself could provide a significant habitat to augment the Pacific Flyway. The Temperance Flat project has similar potential benefits. 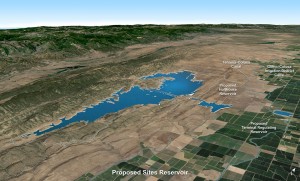 Unlike the off-river storage that the Sites Project would create if constructed, the Temperance Flat project is a proposed dam directly on the San Joaquin River. In fact, the project is more aptly described as a reservoir within a reservoir. Currently, the Friant Dam stops the San Joaquin River and creates Millerton Lake behind its walls. The Temperance Flat Dam will sit behind the Friant Dam (see the map below) to enhance water capture on the River. The water this project will capture can triple the amount of storage in this reservoir. 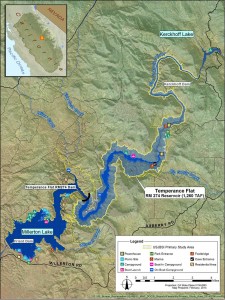 According to the Department of Water Resources, the Temperance Flat project has many of the same potential advantages that the Sites Reservoir has. The excess storage capacity is chief among these advantages. Also, like the Sites Project, wildlife officials could use water stored behind the dam to aid the migration of salmon and other native species that need water at a certain temperature to reproduce.

The Limitations to the Sites and Temperance Flat Projects: Implementation and Finance Issues

Both the Sites and Temperance Flat Projects have the potential to make a difference in the surface water storage equation in California. However, challenges remain before these projects will be “shovel ready”. Both projects face both environmental and financing hurdles that their proponents must unravel before both projects will begin.

First, environmental hurdles remain for both of these sites. Advocacy groups have criticized both projects, arguing that the potential environmental impacts outweigh the potential positives the project may bring. The Friends of the River oppose the Sites Reservoir project, arguing among other things that it will harm the flow of the Sacramento River and potentially reduce water quality in water sent through the Delta. A series of advocacy groups including Friends of the River, the Sierra Club and Revive the San Joaquin all oppose the Temperance Flat project. They argue that opponents have not had enough time to review the massive environmental documents, and there are unanswered issues. Further, Temperance Flat is a new dam, and there is a general aversion to building any new dams in the state. An October Fresno Bee article summed up well the feelings of those opposed to the project. Walt Shubin, a Kerman Farmer said, “It seems like decisions are being made by people who have never seen the River.” The opposition to these projects continues as the permitting process moves forward.

Second, Proposition 1 will fund no more than 50% of these projects. Officials expect the Temperance Flat project to cost approximately $2.5 billion. The other half of the funding will have to come from federal or local sources. The Sites Reservoir Project created a Joint Powers Authority to handle the administration and potential funding for this project. New laws such as SB 628 (Beall) allow for the formation of enhanced infrastructure financing districts (EIFDs) to pool resources to build infrastructure. Funding can come from a variety of sources, and from multiple agencies. While these new financing mechanisms provide funding options for these projects, each will still face hurdles in securing the other half of the funding that Proposition 1 will not provide.

While each of these projects faces its own man-made hurdles, the biggest hurdles to the long-term success of these projects (and indeed every other storage project in the Western United States) may be more mercurial: Mother Nature. California could have robust water storage infrastructure, but we still rely on rainfall and snowpack to provide the supply of water to store. We can only rely on stored water for so long. In a September post regarding long-term drought trends in the Sacramento River Valley, Rod Smith correctly warned of the limitations of water storage. He said, “The implications [regarding the drought] for management of water storage are straight-forward.  Taking water from storage today to avoid shortages now may become a source of regret in a couple of years.”

Rod highlights an important point. The past four years of drought have been unquestionably hard on our water supply. The “atmospheric rivers” that are dumping rain on both coasts this week will put a dent in the drought. But it will take many more storms such as these to reverse the drought’s effects completely. An article in The Atlantic points out that the state will need 18-21 inches of rain in Northern and Coastal Southern California to break the drought. This scenario would require a storm every 3-5 days for the next 3 months straight to come to fruition. The bottom line is that continued investment in regional storage infrastructure is an important component to solving the effects of long-term drought in California. But we cannot kid ourselves that new water storage will solve all of our future problems if and when a severe drought occurs in the future.