The most recent US Drought Monitor released on December 30th finally shows a small glimmer of improvement for California’s drought. Over the last few weeks, a series of major storms dropped significantly higher than normal rains across much of Northern California. In fact, rain in some major Bay Area cities fell at the fastest clip ever recorded there. Oakland received 455% higher than average rainfall in December. San Francisco recorded 424% higher than average rainfall, and San Jose recorded an astonishing 736% of its average rainfall this December. Unfortunately, all of this rainfall put only a small dent in the drought conditions that mire the state. According to the US Drought Monitor, exceptional drought covers 32.21% of the state this week versus 55.08% at the beginning of the December.

An Abridged History of the Colorado River’s Water 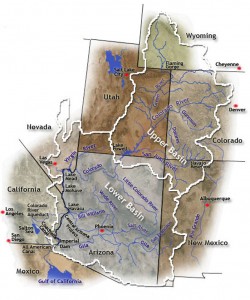 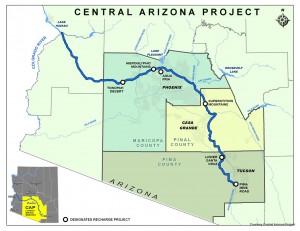 The Colorado River Basin Today: A Story of Limited Supply

Today, the Colorado River Basin faces shortages that are not likely to go away any time soon. In January, 2014, I wrote a piece about how dropping elevations in Lake Powell and Lake Mead will likely cause water supply headaches for years to come. The Elevation in Lake Mead has risen off of critical levels that would trigger water shortage plans, but the water supply is still far from ideal. The water level as of December 29th is at 1,087.62 feet, only about 13 feet above where the first water shortage plans would be triggered. The water levels in Lake Mead concern all users, but Arizona in particular because they will be among the first to feel the water cutbacks. An article in the Voice of San Diego expressed Arizona’s concerns well. “There’s acute concern at 1,075 [feet in Lake Mead],” said Chuck Cullom, Colorado River programs manager for the Central Arizona Project, which supplies that state’s major cities. “The tension and anxiety ratchets up the further the reservoirs drop.” As a result, the Basin States are proactively trying to address these shortages. 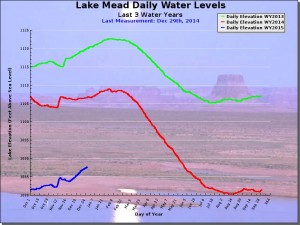 Arizona has a strong incentive to ensure that Lake Mead stays above an elevation above 1,075 feet. Last month, Arizona executed a memorandum of understanding with the other basin states. Specifically, the Central Arizona Project will store 345,000 acre-feet of water in Lake Mead in between now and 2017. According to the Arizona Central, the Metropolitan Water District of Southern California will provide 300,000 acre-feet of water to store. Southern Nevada and the US Government are responsible for 50,000 acre-feet each. If the members reach their storage goals, the water could increase the elevation of Lake Mead by 10 feet. At the press conference after the parties signed the agreement, Central Arizona Project programs manager Chuck Cullom commented on the need for collaboration. He said, “The fact of the matter is that we work together. A direct and open conflict may create more risk and uncertainty than working collaboratively.”

Arizona clearly has a lot at stake and has much incentive to ensure that the elevations in Lake Mead do not trigger water shortage conditions. The new agreement can help to keep Lake Mead’s elevation higher over an extended period of time. But the agreement will not mean the end of the drought or the end of the challenges that the states in the Colorado Basin face. Arizona will get decreased water supplies from the Central Arizona Project, so Arizona will have to make up the supply from other sources. Currently, the Central Arizona Project is working with the City of Phoenix to replace the city’s Colorado River water supply with local water supplies. Also, CAP is entering into agreements with nine irrigation districts in the state to reduce deliveries in 2015 and 2016.

Arizona will have to live with fewer water supplies from the Colorado River to (potentially) avoid water shortage situations in Lake Mead. I believe that the agreement among the Western States is a good start, but will not resolve the long-term drought the region faces. As we enter 2015, let’s hope that Mother Nature provides us with the water we need to prevent these shortages.