Colorado’s water situation looks much less dire in 2015 than it did two short years ago. In February, 2013, exceptional drought covered almost 25% of the Centennial State. Severe drought covered 100% of the state. When we fast forward to today, the situation fortunately is much less dire. (please see the map below for details.) Some portions of Southeastern Colorado face extreme drought conditions. The severe drought that covered the entire state two years ago now only covers 12.26%. However, Colorado is not resting on its laurels to plan for future water crises.

Late last year, Colorado Governor John Hickenlooper released the draft Colorado Water Plan which aims to conserve water resources while planning for the new population growth that will inevitably come to the state. But what is in this plan? More importantly, will the Colorado Water Plan be able to provide the increased water resources necessary to sustain the population growth and economic development in the state? I will address both of these issues in this piece. Next week, I will look more closely at the political implications of the Colorado Water Plan and how it will affect regional collaboration going forward. 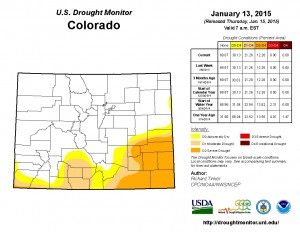 The Nuts and Bolts of the Colorado Water Plan

Colorado is a rapidly growing state. The Centennial State enjoys a relatively low cost of doing business. New industries such as shale oil drilling have also brought a significant number of new jobs to the state. According to the Denver Business Journal,  the City of Denver enjoyed the 6th highest job growth in the country through the first three quarters of 2014. Naturally, population growth follows the job growth in the state. The Colorado Demography Office expects that by the end of the decade, Colorado will see annual population increases of over 100,000 residents. Whenever population increases occur, a region’s infrastructure faces challenges. Water supply and infrastructure will be no exception to this rule as Colorado continues to grow.

Population growth is not the only trend that is putting pressure on Colorado’s water supply. A Colorado College report estimates that 70-80% of all the water consumed in Colorado is used towards agricultural production. Agriculture is an important part of Colorado’s economy and plays a key role in the state’s economy. Oil production is also putting strain on water supplies in the state. While agriculture still uses the majority of water resources in Colorado, the shale oil industry continues to grow at a fast clip. It remains to be seen how the recent collapse in oil prices will affect rig counts in states such as Colorado. However, in the last few years, the oil and gas mining industry has expanded rapidly in the state. According to the Denver Post, Colorado’s economy grew at a 3.8% clip in 2013. The mining of oil and gas contributed 1.62 percentage points of the 3.8% GDP increase. Going forward, both the agriculture and oil industries will play key roles in the discussions about water use in the state.

In this context, Governor Hickenlooper ordered development of the Colorado Water Plan, a comprehensive inventory of current and projected water supplies. The Colorado Water Conservation Board, which represents each major basin area in the state and is charged with implementing the state’s water policy, took the lead on creating this document.  During the last few years, the CWCB held a series of workshops in each basin on the subject of future water supply to determine the challenges that the basins face regarding water. Staff used the feedback from these workshops to craft the draft plan. The plan addresses the following major topics:

While there are many aspects of the Colorado Water Plan, I believe the most interesting aspect of the document is what is not addressed. The Post Independent points out that the report remains silent on supporting or opposing particular storage and supply projects. The plan also does not endorse or veto additional trans-mountain diversion projects. Both of these issues will significantly affect planning for Colorado’s water future, but the Colorado Water Plan will leave these discussions to local authorities. While I understand that the State does not want to wade into politics in a non-partisan plan, at some point Colorado will have to address these sensitive issues. The Colorado State Department of Local Affairs projects that Colorado could see 2.5 million new residents by 2040. Colorado and many other states in the Western US must do more to address the water challenges they face.

The challenges are daunting. Colorado’s population centers and main water sources are not in the same areas. The West Slope of the Rocky Mountains and the tributaries that feed the Colorado River experience the majority of the precipitation in the state. Further, the snowpack provides natural water storage. However, most of the state’s population lives on the East Slope. Consequently, approximately 500,000 acre-feet of water flows annually across the Continental Divide from sources on the West Slope to thirsty communities on the East Slope.

Further, as the drought Colorado experienced two years ago reminded us, cycles of low rainfall have been a fact of life in the Western United States, and will very likely remain so for the foreseeable future. The population growth on the East Slope therefore cannot rely solely on new water diversions from the West Slope for a few reasons. First, the State may not have the political will to allow further diversion projects to take place. But more importantly, the water supply needed to allow further diversion projects may simply not exist in the future to sustain this supply.

Colorado has great growth prospects ahead of it, but it will also face some significant infrastructure challenges related to water. The Colorado Water Plan does a good job at beginning the dialogue between the main basins in the state to determine how they will accommodate future growth. However, it remains to be seen how the basins will work together to allow new development and population growth with limited water supplies.