In his article “The price Texas pays for Mexico’s water debt” recently published in the Texas Water Journal, the chairman of the Texas Water Development Board, Carlos Rubenstein, calls for active participation by the U.S. State Department, White House and Texas officials to have Mexico live up to its obligations under a 1944 Treaty between the United States and Mexico. The article is an excellent source for a concise history of the 1944 treaty and projects and summarizes the economic hardship suffered in the Rio Grande Valley when there are inadequate water supplies. It is less successful in identifying the water resource management problems facing the parties.

While Mexico may indeed have a “water debt problem”, it is not the one identified in the article. Texas’s interpretation of the 1944 treaty is not correct. The real challenge is how can the parties work together to create reliable water supplies in the face of highly variable hydrologic conditions.

The dispute turns on provisions in Section 2, Article 4(B) of the 1944 Treaty. Subparagraph (c) allocates to the United States (“The Allocation”):

“One-third of the flow reaching the main channel of the Rio Grande (Rio Bravo) from the Conchos, San Diego, San Rodrigo, Escondido and Salado Rivers and the Las Vacas Arroyo, provided that this third shall not be less, as an average amount in cycles of five consecutive years, than 350,000 acre-feet (431,721,000 cubic meters) annually (emphasis added).

“The United States shall not acquire any right by the use of the waters of the tributaries named in this subparagraph, in excess of the said 350,000 acre-feet (431,721,000 cubic meters) annually, except the right to use one-third of the flow reaching the Rio Grande (Rio Bravo) from said tributaries, although such one-third may be in excess of that amount.”

Subparagraph (d) addresses the issue of insufficient flows over a 5-year cycle (“Make-Up”):

“In the event of extraordinary drought or serious accident to the hydraulic systems on the measured Mexican tributaries, making it difficult for Mexico to make available the run-off of 350,000 acre-feet (431,721,000 cubic meters) annually, (as allotted above) as the minimum contribution from the aforesaid Mexican tributaries, any deficiencies existing at the end of the five-year cycle shall be made up in the following five-year cycle with water from the said measured tributaries.”

What Does The Treaty Mean?

The Excess: United States receives one-third of the actual flows from designated tributaries from Mexico “although such one-third may be in excess of that amount (350,000 acre-feet annually in cycles of five consecutive years).”

Make-Up: If one-third of the flow from designated tributaries from Mexico falls below 350,000 acre-feet annually in cycles of five consecutive years due to extraordinary drought or “serious accidents”, any deficiencies “at the end of the five-year cycle shall be made up in the following five-year cycle.”

Chairman Rubenstein states “Texas interprets these treaty provisions as requiring a minimum annual delivery of 350,000 acre-feet, except when extraordinary drought conditions do in fact exist. To the extent that extraordinary drought conditions exist that ‘make it difficult’ to deliver the minimum annual contribution to the Rio Grande of at least 350,000 acre-feet, then the annual deliveries can be contemplated to make up such deficiencies.” “The Texas position is that the above provisions of the 1944 Treaty references annual deliveries to the Rio Grande.”

Really? Texas’s position ignores the clause as an average amount in cycles of five consecutive years between “shall not be less” and “than 350,000 acre-feet annually.” Texas finds an annual minimum guarantee (subject to drought or accidents) from the use of the word “annual”. Many, including the U.S. Department of State according to Chairman Rubenstein, find the word “annual” to provide the time dimension to the 350,000 acre-foot number stated in the 1944 Treaty.

While Hydrowonk is not impressed with Texas’s textual interpretation (I would put my “dinero” on Mexico in a binding arbitration), one can surely recognize the economic losses Texas sustains from an unreliable water supply. So, putting aside debating points, let’s look at the historic record of water availability to Texas.

The current five-year cycle started on October 25, 2010 and ends on October 24, 2015. According to the International Boundary Water Commission, the cumulative water deliveries to the United States as of January 31, 2015 were 1,121,418 acre-feet (click on figure). In other words, an additional 628,582 acre-feet of water must be made available in less than nine months (February to October) to satisfy Mexico’s minimum delivery obligation for the five-year cycle. 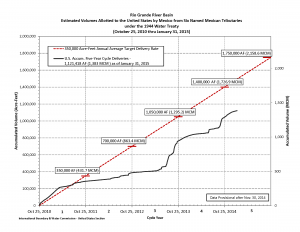 The State of Chihuahua in Mexico manages its water resources to meet their customers’ needs. It is understandable that Chihuahua puts a priority of delivering water to its customers during drought and releasing water into the Rio Grande River during wet conditions. What happens if Mexico “misses” the 1,750,000 acre-foot target for the current five-year cycle? According to the treaty, it must “make up the deficiency” over the next five-year cycle.

Click on the figure below for the International Boundary Water Commission’s compilation of history. The chart is hard to follow. In its last year, the current five-year cycle is now running like an earlier five-year cycle (2002-2007) when cumulative deliveries to the United States totaled less than 1,400,000 acre-feet. These deliveries are substantially higher than two earlier periods (1992-1997, 1997-2002). On the flip side, Mexican deliveries to the United States reached the 1,750,000 acre-foot target in the third-year of the 1988-2002 cycle.

Another piece of the historical puzzle involves the percent of conservation capacity each country has in their jointly owned reservoirs Amistad and Falcon (click on figure). The reservoirs were below 50% capacity from 1996 through 2003. U.S. storage increased substantially from 2003 through 2008 while Mexican storage lagged. Storage ran up to 100% of normal in 2008 then fell down to about 80% through 2011, when storage reached again 100% of normal. Storage was in free fall for the next two years. While storage was on an uptick in 2014, it remains below 50% of normal. 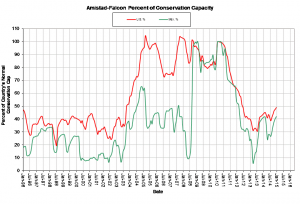 All this evidences a volatile hydrology.

What Does All This Mean?

Does Mexico have a water debt problem? It may. Mexico is generally not satisfying the 350,000 acre-feet per year average over five-year cycles. Of course, if Mexico delivered to the United States at least 350,000 acre-feet each year it would, as a matter of arithmetic, satisfy the cumulative obligation. However, this “fix” would turn the United States “pro rata”, one-third claim over a five-year cycle into a senior annual claim on the designated tributaries. In a world of hydrologic volatility, such a claim asks Mexico to subordinate itself to a junior priority.

The solution must be found in a better understanding of the underlying hydrology of the tributaries and the impact of storage operations on supply reliability for Mexico and the United States. For example, the International Boundary Water Commission website has historical records of the daily flows at designated points on the Rio Grande. Flows on the Rio Grande, of course, reflect the hydrologic conditions in Mexico as well as Mexico’s water use and storage (in addition to flows from up river). Hydrologic conditions are the source of drought conditions, extraordinary or not. The impact of Mexico’s water use and storage are at the heart of Texas’s complaint.

From this perspective, Texas’s suggestion that the parties develop a hydrologic model of the region to identify the hydrologic challenges and assess the impact of projects and programs is a good first step. The Colorado River Basin, for example, has been well-served by the Bureau of Reclamation’s Colorado River System Model that has shaped for more than 25 years negotiations among the Colorado River Basin states and, more recently, including Mexico.

The Texas-Mexico dispute can build on the progress made by Mexico and the Colorado River Basin states on the Colorado River. Through the auspices of the International Boundary Water Commission and Comision Internacional De Limites Y Aguas, the parties have recently developed Minutes 318 and 319 to allow Mexico to store water in Lake Mead, reassign water to U.S. water users and develop bi-national projects to improve management of the Colorado River. The “momentum of cooperation” is continuing and further cooperation is on the horizon, including development of a seawater desalination plant at Rosarito Beach.   Bi-national work groups jointly develop the technical analysis underlying bi-national efforts. Negotiations create new opportunities and, as such, expand the scope of the 1944 Treaty.

Is assertion of a right not found in the 1944 Treaty a good first step to progress? Time will tell.