There is no doubt that California faces continued challenges as we enter into the fourth year of severe drought conditions. The pundits, however, disagree with the severity of the water supply crunch in the state.  Last week, two prominent California water experts gave two different opinions on how severe the water crisis in California really is. Jay Famiglietti, professor of Earth System Science and Civil and Environmental Engineering at the University of California, Irvine made a dire prediction that California has one more year of water left in our reservoirs if drought conditions do not change. He recommends immediate water rationing across the state, urging everyone to pitch in and conserve water. In contrast, Jay Lund, Professor of Environmental and Civil Engineering at UC Davis sounded a more sanguine tone. While he agreed that our snowpack in particular was at alarmingly low levels, he did not agree that California will be at the end of its rope if conditions don’t get better in a year. He said, “It’s not the right impression that one more year of this and we’re toast. There’s quite a bit more left in groundwater – a bit less every year because we’re pumping, trying to make up for the drought.”

So who is right? We cannot predict what next year’s (hopefully) rainy season will bring us, but there is some cause for concern. The snow surveys show that some areas that regularly get measured were snow-free for the first time ever on March 1st. This week, Metropolitan Water District announced that the boat ramp to Diamond Valley Lake will close on April 15th due to the chronically low water levels. The pumping of groundwater across the Central Valley is causing land subsidence and is drawing down a resource that took millennia to build.

Water policy is complex, and as the case above shows, two very prominent people in the industry can have different views on a particular topic. These differing views have an effect on policy decisions as well. Last week, I wrote a piece on the Central Valley Project and State Water Project allocations. At this point, the State Water Project projects that it will deliver 20% of entitlement, but Central Valley Project will deliver nothing to its agricultural contractors for the second year in a row. Why can one project deliver some water but the other project deliver nothing? In this piece, I will try to decipher some of the differences between the two projects and explain why there is a disparity in projected deliveries between the two projects.

On the face of it, you would assume that the two main water projects in California would not be that different. After all, they both rely on snowpack and runoff to supply water deliveries. They both must move water through the Bay Delta to get to the pumps near Tracy. However, there are important differences between the two projects. These differences are manifesting themselves more in a year of drought such as this. I have identified a few key differences that can help to explain why the deliveries between the two projects differ this year.

While the Central Valley Project and State Water Projects share some common reservoirs, each project has its own infrastructure and water resources. This year, the differences in storage levels in the respective projects’ reservoirs give the answer to why each project is delivering different allocations. This winter in California had some of the lowest snowfall on record.  Despite the rainiest December on record in some areas, most of the storms that rolled through the state were warm-weather storms. As such, most of the precipitation fell as rain or the snow quickly melted after the storms. Officials have come to the conclusion that this late in March, “what you see is what you get” in terms of storage in reservoirs.

In most instances, the reservoirs in the state hold below-average supplies. However, the reservoirs in which the State Water Project relies are in relatively better shape than the reservoirs that the Bureau of Reclamation manages. The Capital Press reports that the Department of Water Resources was able to capture some of the storm runoff from systems that moved through the state in February and more importantly pump that water through the Bay Delta at that time with limited restrictions. As such, the San Luis Reservoir has approximately 600,000 more acre-feet now than it did at the same time last year. DWR officials hope that this increased supply in San Luis will take the pressure off of Lake Oroville’s dwindling supplies.

While the Central Valley Project shares some storage in the San Luis Reservoir, other Federally-operated reservoirs are in dire shape. For example, the New Melones Reservoir (see image below for current reservoir conditions across the state) is at 40% of historical capacity. The New Melones Reservoir and Tulloch Lake which sits further below the dam could reach “dead pool” levels (where the water levels are too low to flow out of the dam) by the end of the summer. Further, while some reservoirs are in better shape than last year at this time, (Shasta Lake and San Luis Reservoirs in particular) Bureau officials look at the water situation holistically. While some reservoirs are in better condition than last year, others such as the New Melones and Millerton Lake are not. Further, the snowpack is worse than last year, so little new water will likely recharge these facilities. As such, the Bureau of Reclamation will again deliver a zero percent allocation this year. 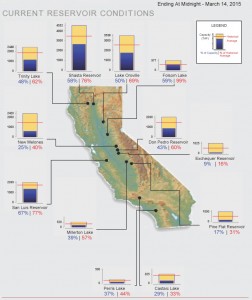 Finally on this topic, an invasive plant is causing further problems at the Federal pumps in Tracy. The Merced Sun- Star reports that the US Bureau of Reclamation has to slow down pumping operations in the Central Valley Project because of significant hyacinth blooms this year. Project operators are afraid that the plant material will clog the pumps and must slow operations until they can get the blooms under control.

What Will the Future Hold?

While anything can happen, both State and Federal officials are not optimistic about getting significant further water supplies from runoff this year. With the snowpack at all-time lows, we will have to make due with the water supplies we have now. For this year, water supplies across the state will be limited. However, the subtle but important differences between the State Water Project and the Central Valley Project determine whether contractors will get a small trickle of water or nothing at all.